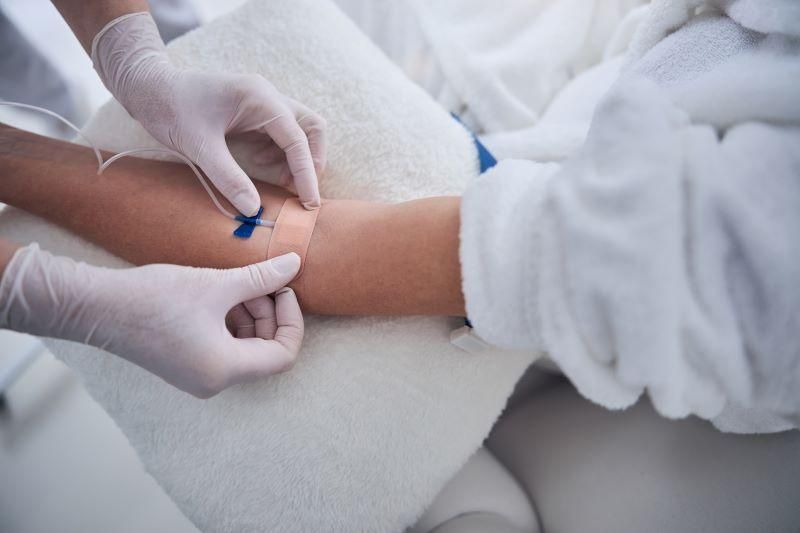 Intravenous (IV) lines are generally associated with medical centers — picture a patient in a hospital bed, an IV drip-dropping needed fluids, nutrients and medicines into their arm.

But millions now are receiving IV treatments at home, and a new study warns that not enough people are being properly trained to watch out for potentially dangerous IV-associated infections.

There are no standard protocols for training home care nurses, caregivers or the patients themselves how to watch out for and report signs of infections caused by IV lines, said co-author Dr. Sara Keller, an assistant professor of infectious disease at Johns Hopkins University School of Medicine in Baltimore, Md.

“There are more patients receiving home infusion therapy now than there were 10 or 20 years ago, and being able to monitor complications in a validated and standardized fashion is going to be important,” Keller said.

More than 3 million patients received IV treatment at home in 2019, a 300% increase from 2008, according to the National Home Infusion Association.

“People no longer are in the hospital for six weeks of IV therapy,” said Dr. Aaron Glatt, chief of infectious disease at Mount Sinai South Nassau, in Oceanside, N.Y. “They're sent home with central lines in place, and they'll get their therapy on a daily basis as an outpatient, usually giving it to themselves or sometimes with a visiting nurse.”

Antibiotics, chemotherapy drugs, fluids, nutrients and any number of medicines are regularly given to people at home through an IV line, Keller said.

This is actually safer and better care than these folks would receive in a hospital, Glatt noted.

“A hospital is not a good place to be. There are all sorts of antibiotic-resistant bugs,” he said, adding: “It's much, much better for the patient to be at home. They can get on with their lives.”

At the same time, those handling the home IVs often don't have a high degree of technical training or experience.

“A lot of these people aren't as well-trained as we would certainly like,” Glatt said. “A lot of them are not necessarily doing these home infusions solely — every now and then they'll do them, but not regularly. Sometimes you're dealing with family members that are even doing these infusions.”

Decades ago, hospitals recognized the ongoing risk of infections associated with IVs, Keller said. An IV site can become infected, and the port can introduce a serious infection into a patient's bloodstream, endangering their life.

As many as one-quarter of people who get a bloodstream infection as a result of an IV can die, the researchers said in background notes.

“Any time there is a either plastic device or metal device that goes from outside the body to inside the body, especially into a major blood vessel, that can be a way for bacteria and other infections to enter,” Keller said.

“There's really been a lot of work over the last 25 years to determine ways to decrease the risks of infections from those kinds of devices,” she continued. “Over the years in hospitals, those infections have decreased by over 50% through a lot of hard work from a lot of people.”

Hospital workers are then taught to apply those guidelines and keep a watchful eye for signs of IV-related infection.

But that training has not been extended to those receiving IV treatment at home, the researchers found.

The staffers were quizzed on the infection surveillance training they had received and how it might be improved.

Researchers found that many staffers who look out for these infections receive little to no formal training on how to detect CLABSIs.

Instead, they tend to learn on the job, rely on their prior experience, or pick up things here and there at conferences.

The workers also complained that there are no user-friendly resources available to help them track infections, no readily available professional development tools, and little formal training from their companies.

It's vital to get this training to people providing home infusion therapy, said Pat Jackson, president of the Association for Professionals in Infection Control and Epidemiology (APIC).

Because there's not standardized training, one person might do surveillance one way and another might do it differently, Jackson said.

“We want everyone to do it the same way so that infections are identified in the same way, so ultimately we can make interventions to improve patient care and safety,” she explained.

Jackson and Keller suggest that the definitions and training provided to hospital staff could be adapted to home IV care.

APIC and the U.S. Centers for Disease Control and Prevention have infection control training protocols already crafted for a hospital setting that could be immediately put into place, Jackson said.

“We don't have to re-create the wheel, but we probably need to adapt these definitions to the home environment,” she said. “We have good evidence that trained people reduce infection rates, and that's really what our mission is about.”

In the meantime, Keller suggested that patients and their caregivers be proactive in asking doctors and nurses how to spot signs of infection, as well as ways to prevent IV-related infections.

“If there's more than one person caring for a patient, ask the home infusion nurse if he or she wouldn't mind observing each of the potential caregivers, to make sure everything is going right,” Keller said.

She also suggested using checklists, to make sure that steps don't get missed.

The new study was recently published in the American Journal of Infection Control.