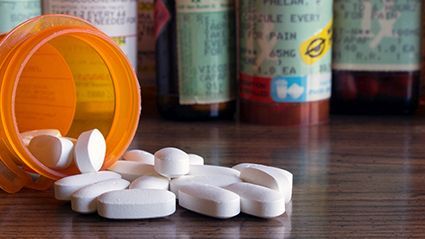 Growing numbers of older Americans are dying from drug overdoses and alcohol abuse.

That's the tragic takeaway from two new reports by the U.S. Centers for Disease Control and Prevention.

More than 5,000 people aged 65 and older in the United States died of a drug overdose in 2020, and this number has tripled since 2000, according to one of the reports.

The new research wasn't designed to look at why more older Americans are dying from drug overdoses or alcohol abuse, but the findings mirror what has been seen in younger age groups.

Abuse of fentanyl and other synthetic opioids has had a big impact on the older population as well as younger folks, said study author Ellen Kramarow. She is a demographer at the CDC's National Center for Health Statistics, which published the data Nov. 30 in an NCHS Data Brief. Death rates from these drugs increased by 53% from 2019 to 2020 among people aged 65 and older, Kramarow said.

The increase in deaths from drug overdoses and alcohol use has been rising faster in men, she added.

The risk of dying from alcohol-induced causes among people aged 65 and older was highest among American Indian and Alaskan Native people, the investigators found.

Experts who reviewed the new study were distressed but not surprised by the statistics.

The findings sadly reflect what Anne Fernandez is seeing in her practice. She is an associate professor in Michigan Medicine's department of psychiatry, in Ann Arbor.

“I am struck by the increase in fatality from alcohol and drug use among both older adults and among younger adults, as well,” Fernandez said. “The two things that stand out to me are deaths from alcohol-associated liver disease and deaths from a drug overdose.”

Many factors play a role in this uptick, she said. “The baby boomer generation is now reaching older adulthood, and baby boomers historically have higher rates of substance use than the generation before,” Fernandez explained.

It's also been a perfect storm for drug and alcohol abuse. “Alcohol and drug use also tend to increase when there are economic challenges, when drugs and alcohol are accessible and affordable, and when major stressful events take place, like the COVID-19 pandemic,” she said.

In addition, the drugs people take now are also more lethal than they were even a decade ago. “Early on, the opioid overdose crisis was driven by prescription opioid use but now it is driven by highly lethal synthetic opioids like fentanyl in the drug supply,” Fernandez noted.

Alcohol often gets pushed aside in discussions about substance abuse and addiction. “We often talk about the opioid epidemic, but we are also living in an alcohol epidemic and have been for some time,” she said. “Americans are simply drinking more in recent years and this is driving increases in deaths from liver disease, motor vehicle accidents and poisoning/overdose."

Decreasing deaths from drugs and alcohol is a national priority, and many groups are working on prevention and intervention.

“More stringent alcohol policies could be used to reduce the accessibility and affordability of alcohol,” Fernandez suggested. “As a culture, I also think we need to change the conversation around alcohol to focus more on alcohol's impact on health like we did for smoking decades ago.”

Addiction treatment should be accessible, affordable and high quality. “We need to make addiction care as well-funded and prioritized as any other type of health care, and that is not the case currently despite these alarming national trends,” she said.

In addition, destigmatizing these conditions is also hugely important so that people can talk about these issues openly, and seek help early and often, Fernandez advised.

Substance use disorder — whether it be alcohol or drugs — has grown significantly since the start of the COVID-19 pandemic, agreed Dr. Tucker Woods. He is the chair of the emergency department and associate medical director of Lenox Health Greenwich Village, in New York City.

What's more, the COVID-19 pandemic also made it difficult for many individuals to seek help, Woods said. Treating addiction saves lives, he added.

Calling the data “tragic,” Dr. Catherine Sarkisian pointed out that current seniors came of age during the Vietnam War and/or were baby boomers and had a much higher rate of drug use than people who came of age during World War II. She is a geriatrician and professor at the University of California, Los Angeles.

“It is terrible but not completely surprising that drug overdose would also be higher in this cohort than in previous cohorts of seniors,” Sarkisian said.

Going forward, it would be interesting to try to learn to what extent the overdoses are accidental versus intentional, as this information can help design appropriate and effective prevention strategies, she added.

The U.S. National Institute on Drug Abuse has more on substance abuse in older adults.