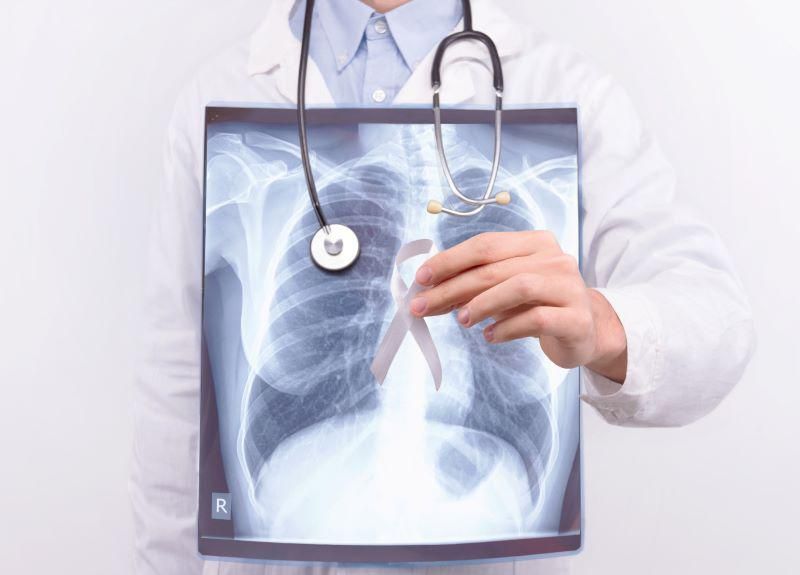 Screening tests routinely catch cases of breast and colon cancer early, but a screening test for lung cancer is sorely underused in high-risk people and that needs to change, more than 50 cancer organizations said in a joint statement issued Tuesday.

What prompted the move? Low-dose CT screening is recommended for people who are more likely to develop lung cancer, yet only 5.7% of people who are eligible get screened, the groups noted in a call to action for more screening.

That's exactly what it did for New York resident Colleen Medvin.

“I'm here because last year, a low-dose CT scan for lung cancer saved my life,” she testified during a congressional hearing in September. Medvin was diagnosed with both lung cancer and breast cancer following lung screening at Roswell Park.

“Because each cancer was detected early-stage, surgery was the best option,” Medvin noted in her testimony. “I can't believe how lucky I got.”

About 46% of lung cancer patients are not so fortunate, and are diagnosed after their lung cancer has spread, Reid noted.

“I'd really like to see a change and I think as a society we know what needs to be done, and we need to do it and not mess about anymore,” Reid added.

It is now recommended for people aged 50 to 80 who have smoked 20 pack-years, or about a pack a day for 20 years or two packs a day for 10 years. People who smoked that much but who have quit within the past 15 years are also eligible.

About 14.5 million Americans are eligible for the screening. With early detection, as many as 60,000 people each year who would have died of lung cancer would instead live, the groups said.

“There's no debate here about its efficacy. That is proven,” said Dr. Andrea McKee, a spokeswoman for the American Lung Association and chief of the division of radiation oncology at Lahey Hospital & Medical Center's Sophia Gordon Cancer Center in Burlington, Mass. “Rarely do you see so many expert groups across the nation all saying, 'This is agreed. This is an important test for these people, for this patient population.'”

Unfortunately, a number of barriers exist that keep high-risk people from getting this essential screening. Among them are simply a lack of awareness by both patients and providers, the group said.

Stigma and prejudice persist about spending health care dollars to save the lives of people who smoked, McKee said.

“And so we're having to battle that stigma and advocate for people who either currently smoke or smoked in the past to get beyond that,” McKee said.

When the guidelines were first created, not a lot of sites adopted these radiology practices because at the time they needed to pay to join a registry that was expensive, Reid said. Rural areas were particularly underserved, while cities were more likely to have good lung cancer screening programs.

It took time after the results of a large, randomized trial were published in 2011 to establish screening guidelines and codes for charging insurance companies, McKee explained, and for medical offices to put protocols and staffing in place.

“This is a big deal all of a sudden to get — it's now about 15 million people in the U.S. who are at high risk for lung cancer — to get all of them screened. It doesn't just start on a dime. It's a process to put that infrastructure in place,” McKee noted.

Screening also requires pre-authorization from an insurance company, even though the guidelines are fairly straightforward, Reid said, and that puts the burden on primary care doctors.

Another barrier is that many primary care doctors are not trained on the guidelines and what to do if screening turns up a problem for a patient, Reid added.

“I think why we wrote the consensus statement and why we have these talking points is that we have great resources on a national level… but on the ground, on the street, there are these things that limit uptake,” Reid said.

At least 5% of people eligible for screening live more than 40 miles from a screening facility. In rural areas, at least 25% of eligible people live far from screening sites, the groups said in a statement.

Lung cancer deaths comprise about 25% of all cancer-related deaths, making it the leading cause of cancer deaths.

Educating high-risk patients about the need for screening is an important part of the solution. People feel fatalistic about the disease because they've become used to seeing people die of it, McKee said, but the screening is noninvasive and painless.

It's a “very easy test. You go in there. You hold your breath for 10 seconds,” McKee said.

People can determine their eligibility for screening in the American Lung Association's risk assessment quiz.