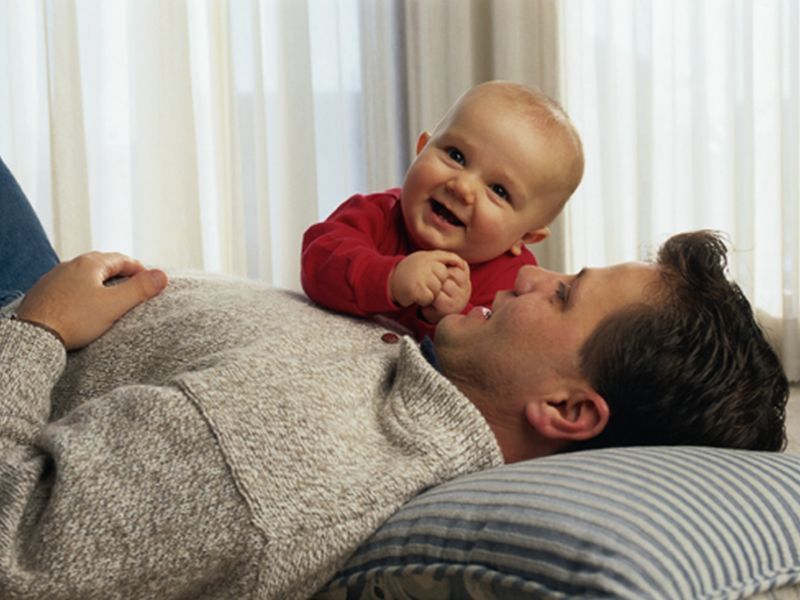 When men become parents, a lot changes in their lives -- less sleep and more time devoted to taking care of their children come to mind -- but new research now suggests that distinct changes also unfold in a new father's brain.

Researchers scanned the brains of new fathers to discover and study those changes after suspecting this would be the case and seeing evidence from animal studies that new fatherhood would be one of the times when a man's brain would show enhanced neuroplasticity.

New fatherhood is an adaptive time, when dads are learning how to care for their babies, read their signals and communicate with them, explained senior study author Darby Saxbe, a professor of psychology at the University of Southern California.

"All of those really require the brain to grow, change and develop in order to fit that new behavioral repertoire," Saxbe noted.

The human brain goes through changes at various times of life, including in early childhood and adolescence. People also have plasticity in the brain when learning how to play a musical instrument, speak a new language or go through psychotherapy, she said.

Though more research exists for changes in the brains of new mothers than new fathers, it's limited for both, Saxbe said.

To study the issue, researchers in the United States and Spain scanned the brains of 40 expectant fathers, half in each of the two countries. They also included a comparison group of 17 childless men whose brains were scanned in Spain.

Researchers were looking for changes in dads similar to those in moms, with surprising reductions in gray matter volume.

"You think you're moving into this new life stage, the brain is going to grow. It looked like instead the brain was actually in some ways consolidating and streamlining, maybe becoming more efficient, particularly in social cognition-relevant areas that were tied to the mother's attachment to their offspring," Saxbe said. "We were curious to see if we would show similar patterns in the fathers, and that is what we did find to some extent.

"One of the take-home messages was that the changes in the men were less striking, they were more subtle and they were specifically just in the top layer of the cortex of the brain, not so much in the subcortical areas that are more involved in emotion, threat detection and salience, which are areas where we saw change in the mothers," Saxbe said.

In men, the researchers found that the most significant changes were in the cortex. Brain scans showed changes in the parts of the cortex that process visual information and are part of the brain's default mode network, which can become active during daydreams, memory recall or thinking about the future. These regions may also be involved in empathy.

Researchers are still trying to figure out the reasons for the changes.

"I think one exciting thing about finding this in men is it suggests it's not just the influence of being pregnant," Saxbe said.

Possibly the experience of interacting with an infant is prompting that neuroplasticity, she said.

“And for as to why the changes seemed less notable or striking, I think that reflects the variability in fathering behavior," Saxbe said. "Some fathers are primary caregivers who are really hands on, and other fathers may be less engaged."

The findings were published recently in the journal Cerebral Cortex.

Dr. Alex Leow, a professor of psychiatry and bioengineering at the University of Illinois Chicago, said science is now appreciating that people have many differences and that it's important to study different groups.

There is more awareness of sex differences in the brains of men and women, in both structure and function, Leow said.

Leow noted that the default mode network is a concept that has been popular among brain scientists for about 10 to 15 years. The idea is that the brain is active even if it's just thinking through the day's tasks.
"A lot of the things the brain's thinking about when we are not doing a task is really contemplating ourselves. It turns out that's exactly a fundamental function of this default mode network," Leow said.

Where a person is in terms of their life span can also make a difference. A person's focus may be different in their 20s than when they have kids, when their children are in their teen years or when they are approaching retirement, Leow said.

"And I can see that when parents are now expecting a newborn baby, that reflection is totally different. It's a very different kind of reflection," Leow said. "And I think in that sense, it makes a lot of sense for the primary part of the brain to be affected being the default mode network."

Other studies have followed mothers for a longer period of time to see if changes after pregnancy reverted back to baseline or were permanent. That would be an interesting follow-up question to pursue after this study, Leow said.

Saxbe would now like to know if individual differences in fathering behavior might be linked with some of the brain changes, and a lot more.

"I think we barely scratched the surface of understanding the parenting brain," Saxbe said.

The U.S. Centers for Disease Control and Prevention has more on what happens after the baby arrives.