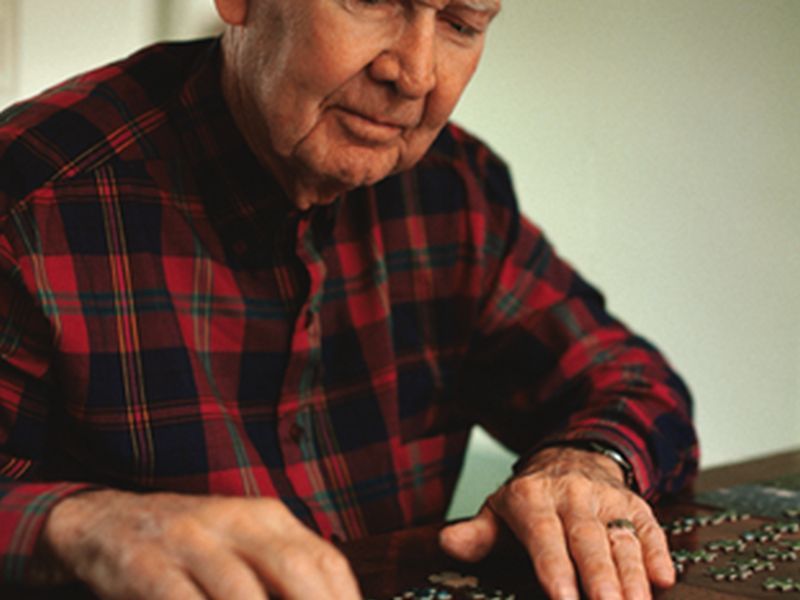 Researchers have discovered another clue as to how some older people stay sharp as a tack into their 80s and beyond: Their brain cells are really big.

The study focused on what scientists have dubbed "super-agers" — a select group of elderly adults who have the memory skills of people decades younger.

The researchers found that in a memory-related area of the brain, super-agers had larger neurons than elderly adults with average brain power — and even in comparison to people 30 years their junior.

What's more, those big brain cells were relatively free of "tau tangles," one of the key markers of Alzheimer's disease.

Tau is a protein that, in healthy brain cells, helps stabilize the internal scaffolding. But abnormal versions of tau — ones that cling to other tau proteins — can develop as well.

In people with Alzheimer's, the brain is marked by a large accumulation of those tau tangles, as well as "plaques" — clumps of another protein called amyloid.

Researchers at Northwestern University, in Chicago, have been studying super-agers for years. In previous work the investigators found that those unusually sharp seniors are similar to their cognitively average peers when it comes to amyloid plaques: Both groups have comparable amounts in their brains.

Where they differ is in tau buildup. Super-agers have far fewer tau tangles in a memory-related area of the brain called the entorhinal cortex.

The new study, published Sept. 30 in the Journal of Neuroscience, adds to that picture. Super-agers also have larger neurons (nerve cells) in the entorhinal cortex.

"The study of super-aging establishes the principle that dementia is not inevitable — that withstanding 'abnormal aging' is possible," said lead researcher Tamar Gefen. She is an assistant professor of psychiatry and behavioral sciences at Northwestern's Feinberg School of Medicine.

It also highlights the link between tau accumulation and the dementia process, Gefen said. Historically, amyloid plaques have gotten most of the attention, she noted — with drug development mainly aimed at reducing amyloid plaques in the brain.

Now, Gefen said, "it's generally accepted among the scientific community that amyloid is not the only culprit. There are several targets, amyloid and tau included, that need to be considered in the fight against Alzheimer's pathology."

Based on the new findings, she said, her team suspects that tau tangles may cause neurons to shrink.

There are many unknowns about super-agers — including how many are out there, and why their brains resist age-related decline. It's likely a mix of good genes and lifestyle factors, and Gefen said the super-ager study is trying to figure what, exactly, those factors might be.

Understanding why some seniors cognitively thrive into their 80s, 90s and beyond will also help researchers understand why so many others develop dementia.

"In order to more fully understand dementia risk, it is important for researchers to examine both sides of the coin," said Claire Sexton, senior director of scientific programs and initiatives at the Alzheimer's Association.

"In those people found to be consistently more resistant, what can we learn from them to help others reduce their risk of Alzheimer's or other dementia?" said Sexton, who was not involved in the study.

She agreed that the new findings highlight tau as a key player.

"While much of the limelight is currently on anti-amyloid therapies for Alzheimer's," Sexton said, "these new findings align with a growing focus on the role of tau in neurodegenerative disease."

Sexton noted that the Alzheimer's Association is funding a number of studies developing experimental anti-tau therapies. And earlier this year, researchers launched the first trial to test a combination of drugs targeting both amyloid and tau.

The current findings are based on autopsied brain tissue from six elderly adults who'd participated in the super-ager study before their deaths and agreed to donate their brains for research. Their tissue samples were compared against donated brain tissue from seven "cognitively average" seniors, five elderly adults with early-stage dementia, and six healthy adults 20 to 30 years younger.

Overall, Gefen's team found, super-agers had larger neurons, with far less tau, in the entorhinal cortex, versus both groups of older adults.

Surprisingly, their neurons were even larger than the younger group's — some of whom were only in their 40s, Gefen noted.

It's not clear why. But, Gefen said, it's possible that super-agers are equipped with those larger neurons at birth.

She speculated that the super-size neurons may "harbor features," as yet unknown, that help them resist tau-tangle formation. Resistance to tau, in turn, might protect the neurons from shrinking.