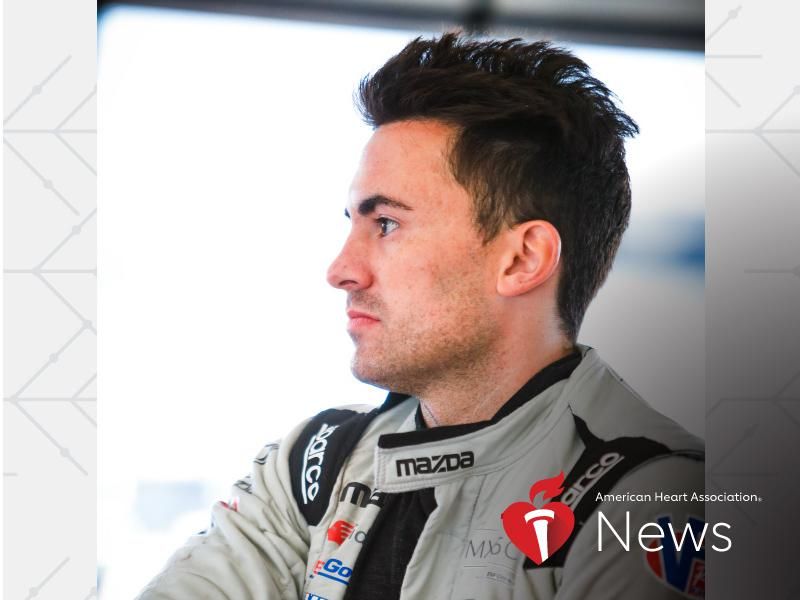 Bryce Cornet is no stranger to a racing heart. His heart beats faster each time he puts on his helmet, slides into the cockpit of his race car, snaps on the buckles of his harness and puts the pedal to the floor to careen around a twisting, turning racetrack.

"I always wanted to be a race car driver," Bryce said. "Once my parents saw my interest in watching racing on TV and playing with die-cast race cars on the living room floor, they introduced me to the world of kart racing."

The Norman, Oklahoma, native started racing go-karts when he was 6. Although his heart beat a little faster each time he got behind the wheel, he knew there was nothing normal about the severe heart palpitations, dizziness and sweating he experienced during a high school math class.

"My mind immediately went to the worst-case scenario," Bryce recalled. "I thought I was a 15-year-old having a heart attack."

It wasn't the first time Bryce had seen a doctor for similar symptoms. In a previous appointment for complaints about acid reflux, Bryce was hooked up for an electrocardiogram, but it was removed by doctors prior to the test. They thought he was too young to be having heart issues; figuring it was acid reflux, they considered the EKG unnecessary.

After the episode in math class, he finally got an EKG. It showed he had Wolff-Parkinson-White syndrome, or WPW, which means he has an extra electrical pathway between the upper and lower chambers of the heart that causes a rapid heartbeat.

Doctors recommended his parents learn CPR as soon as possible in case Bryce had a cardiac arrest.

"It was scary," said his mother, Kimberly Cornet. "You don't think about something like this happening to your child."

The diagnosis came at a pivotal time in Bryce's racing career.

He'd just returned from a motorsports driving school in Ontario, Canada, where he set a track record and attracted interest from sponsors. Now, instead of riding that momentum and getting a license to compete at the next level, he found himself racing between medical appointments and navigating the twist and turns of life with a heart condition.

When Bryce was diagnosed with WPW, he immediately asked if it was reversible. The answer was yes – if they could find the specific "extra" electrical pathway that was affecting his heart rate. Once located, it could be treated.

The first step was for Bryce to wear a vest-like heart monitor that provided around-the-clock information about his heart rate. That lasted for six months.

Self-conscious about the bulky device, and not wanting to advertise that he had a heart condition, he longed for cooler weather and the opportunity to hide it under a sweatshirt.

"Not only was I afraid of the symptoms of my heart abnormality, I was concerned about how this roadblock would impact the progression of my motorsports career," he said. "I was very ambitious and remain that way. I had a sense of urgency that I needed to progress and needed to progress now." Between the heart monitor and several scans, doctors had a better handle on his problem. In 2010 and 2011, Bryce underwent two catheter ablations that destroyed the extra pathway and resolved the rapid heartbeat.

"A second procedure was necessary because he was still having some abnormal symptoms," Kimberly said. "The second cardiac ablation solved the problem."

Although Bryce was medically cleared to return to racing, medical bills put the brakes on his aspirations, forcing him to miss several seasons. He used that time to earn undergraduate and graduate degrees; he returned to the track in 2017.

At 28, Bryce is currently a professional race car driver and a national champion in an open-wheel racing series. Outside of racing, he's a senior logistics manager in the electric vehicle battery industry.

Now that he is behind the wheel once again, Bryce isn't just racing to the finish line; he's also doing laps as an educator and helping spread the word about WPW. He has participated in several American Heart Association Heart Walk events and launched fundraisers to support the AHA.

Bryce receives annual EKGs to monitor his heart health and he's been clear for more than a decade. Now, when he experiences a racing heart, he's confident it's an adrenaline rush from his fast-paced racing career.