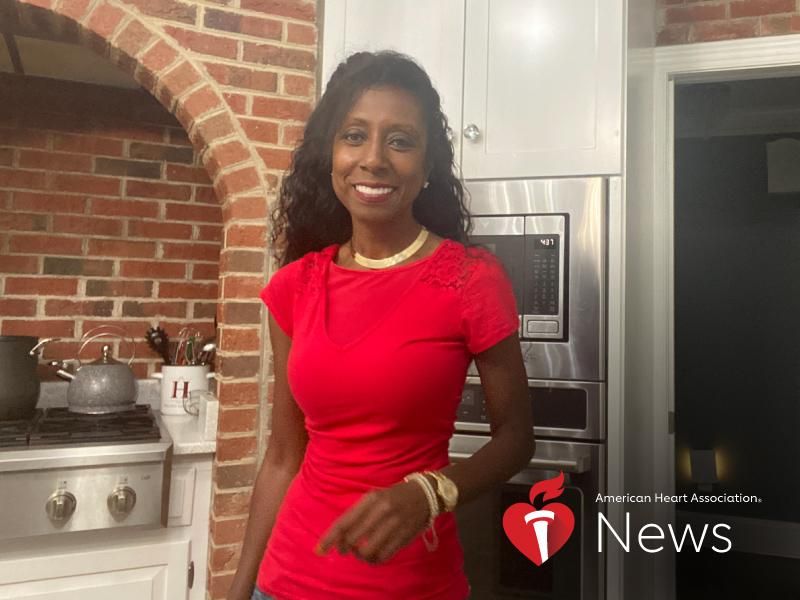 At 26, Melody Hickman of Raleigh, North Carolina, was crestfallen. A routine physical detected a problem with her mitral valve. Fixing it required open-heart surgery.

"I knew I would have to be on a heart-lung machine, and the idea of having the incision really bothered me," she said, noting she often wore V-neck tops. "It was a lot to digest."

The surgery and recovery went well. Then, 14 years later, the valve needed to be replaced again. That meant a second open-heart surgery.

In the aftermath of that surgery, she often felt weak and sick to her stomach. Feeling hot and sweaty at work one day, she locked her office door, closed the blinds and threw up into a wastebasket. "My legs were so weak that I couldn't even get up off the floor," she said.

Thinking it might be stomach problems, her then-husband took her to a gastroenterologist. In his office, she passed out. The doctor started an I.V. and called an ambulance.

Rushed to a hospital, Hickman slipped into a coma. She'd had a heart attack. Intubated and on 24-hour dialysis, she was unconscious for about a month. Her prognosis was so bleak that the transplant team approached her family about donating her organs on what happened to be her 40th birthday.

Her family couldn't bear the thought of giving up. Instead, they remained by her side, reading the newspaper out loud, singing and telling jokes. While she has no memory of that time, "I believe the sensations that I was getting helped me to come out of it," she said.

When she finally awoke, her speech was slurred and her body was weak. She had to relearn to walk and use eating utensils. Her heart was in bad shape, too.

Over the coming months, doctors patched a hole in her heart, implanted a defibrillator and, later, implanted a left ventricular assist device, or LVAD.

Powered by an exterior battery connected to the device by a cord in Hickman's abdomen, the LVAD helped her heart pump blood to the rest of her body. An LVAD is often used to keep people alive until a transplant. Indeed, Hickman was placed on the waiting list for a new heart.

"She had heart failure, and the extent of her heart failure was felt not to be reversible," said Dr. Antone Tatooles, a cardiothoracic surgeon who treated Hickman.

While the LVAD kept her alive, it brought its share of challenges, too. Hickman felt so weak that she kept a portable toilet next to her bed. She cleaned herself using a washcloth. The heat produced by the battery pack also bothered her.

Her father, a pastor, urged her to ask God for what she wanted more than anything. The answer, of course, was a new heart. She'd been reluctant to pray for that because she understood "for me to live, someone had to die."

Desperate for help, she prayed, anointing her chest with oil her father had prayed over with two colleagues.

Three hours later, the transplant coordinator called. They'd identified a heart that might be a match. Later that day, he confirmed it. "I thought I was dreaming," she said. Knowing that another family was grieving, she sobbed on the drive to the hospital.

After so many open-heart surgeries, she worried that her body couldn't withstand the operation and dreaded another painful recovery. She was all too familiar with the heart-shaped pillow the hospital provided to hold against her chest when she coughed.

Her multiple surgeries indeed complicated the transplant. Tatooles had to cut through thick scar tissue before he could successfully replace her damaged heart.

Hickman knew as soon as she regained consciousness that her new heart was working. She could breathe more easily. And after attending cardiac rehabilitation, she got around better than she had in a year. "I thought I was in heaven when I could take a bath again," she said. "I got my independence back, a new lease on life."

Hickman was excited when she received a letter from the parents of her donor. She learned that their 20-year-old daughter, Ashley, died of a brain aneurysm. Hickman replied, and they met soon afterward.

Hickman arrived with a stethoscope in case they wanted to hear their daughter's heart beating. They had one too.

"Meeting them was very emotional," she said. "I wake up and thank Ashley every morning without fail."

Hickman has a new attitude these days. She doesn't sweat the small stuff, and she's grateful for things she might not have noticed before. Eager to give back, she volunteers for Meals on Wheels and often talks with other people with heart conditions about her experience. Don't give up, she tells them, because you never know what tomorrow will bring.

"She had just the most incredible attitude," Tatooles said. "She was really a great spokesperson for mechanical support and transplantation to help educate people around her about the medical therapies that we have today to support people similar to her who have end-stage heart disease."

In September, Hickman celebrated nine years since her transplant. The fact that Sept. 29 is both her birthday and World Heart Day make the month even sweeter.

"I have a real zest for life now that I don't know if I would have ever had if I hadn't been through so many things to live," she said. "All these extra days are such incredible gifts."