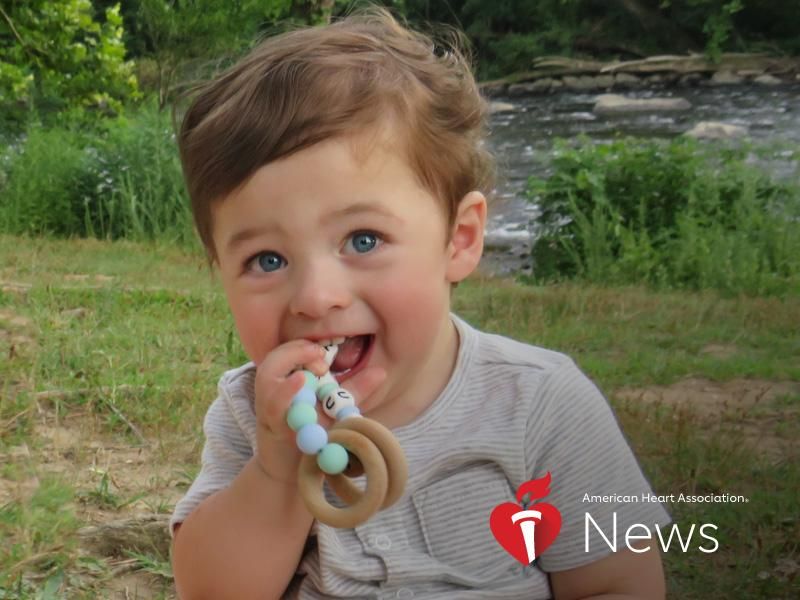 With three children over the age of 10, Delaware couple Mark and Jenn Parrish thought they might be finished growing their family. Finding out Jenn was pregnant was a pleasant surprise.

"It was more of a surprise when we saw the ultrasound and there were two heartbeats!" she said.

At 34, Jenn was considered high-risk. She underwent multiple ultrasounds to examine the babies' organs, including all four chambers of their hearts. All went well every time.

On May 29, 2021, daughter Elina arrived first, healthy and screaming. Son Marcus cried a little but wasn't as lively. A few hours later, Jenn noticed her newborn son was lethargic, less and less interested in nursing, and starting to breathe rapidly.

"I instantly knew something was wrong," she said.

The pediatrician agreed to run some tests. A chest X-ray showed fluid on his lungs. Then came an ultrasound on Marcus' heart.

"That's when they discovered he was having major issues," Mark said.

The care team responded "like an emergency situation," Jenn said. "They took our baby, wheeled him downstairs and tried to intubate him immediately."

Fearing for their son's life, Jenn and Mark said goodbye to Marcus before he was transported an hour and a half away to a hospital better equipped to evaluate him. He was there only minutes before being sent to a children's hospital for treatment. The nervous parents, who watched this all play out via video, were told they had a "very sick little boy."

Within days, Marcus had surgery to repair a narrowing of his aorta, known as a coarctation of the aorta. The surgeon also addressed another problem: a large hole between the two lower chambers of his heart, known as a ventricular septal defect. They treated this by placing a band around an artery, slowing the blood escaping through the opening. He also had a defective valve and another narrow artery.

Less than two months later, the family was getting ready for a doctor's appointment. Marcus was in his car seat, ready to be carried to the car, when Mark screamed, "Jennifer, he's blue!"

Quickly, he removed the limp infant from his carrier, checked for a pulse and found none. Thankfully, Mark, who'd learned CPR years before as a Boy Scout, had taken a course again at work a year before.

"The training I had received took over, and I just started chest compressions, started breathing for him," he said. "After what seemed like an eternity, but was only a matter of minutes or seconds, he started a slow weak cry, and I started rubbing on his chest and just talking to him and encouraging him and giving him a few more breaths until he started crying louder and louder and louder."

Jenn, who called 911, said the first faint cry was "a noise you never forget."

"The next thing I know, there is an off-duty EMT in our house in shorts and flip-flops, but he had his jump bag with him and was able to give him oxygen," Mark said. "Then it was just a whirlwind of paramedics and police."

At the hospital, an echocardiogram showed that Marcus had a cardiac event. Other tests came back normal, but Marcus needed a second surgery to remove the band around his artery. Apparently the band that was supposed to help prevent one problem was now causing another by restricting blood flow.

Congenital heart defects are "a lifetime diagnosis filled with uncertainty," Jenn said. For instance, Marcus may need to have a stent because of scar tissue the band left behind.

He also has some developmental delays but is progressing well with therapy. In fact, though he lagged his sister in motor skills, he stood up and started walking perfectly around his first birthday.

"It was like he was behind, and then he snapped his fingers, and now he's ahead of his sister," Jenn said. "Now he's not only walking, he's running everywhere."

The couple is grateful for the scientific advancements that saved their son's life but know more work remains. They are now advocates for children with congenital heart defects and the families "who lose their infants due to missed early diagnosis and treatment."

They also urge other parents to have CPR training because it doesn't have to be something as serious as a congenital heart defect to cause a cardiac event.

"I think that's something every parent should have," Mark said, "because you never know when your child is going to need it."