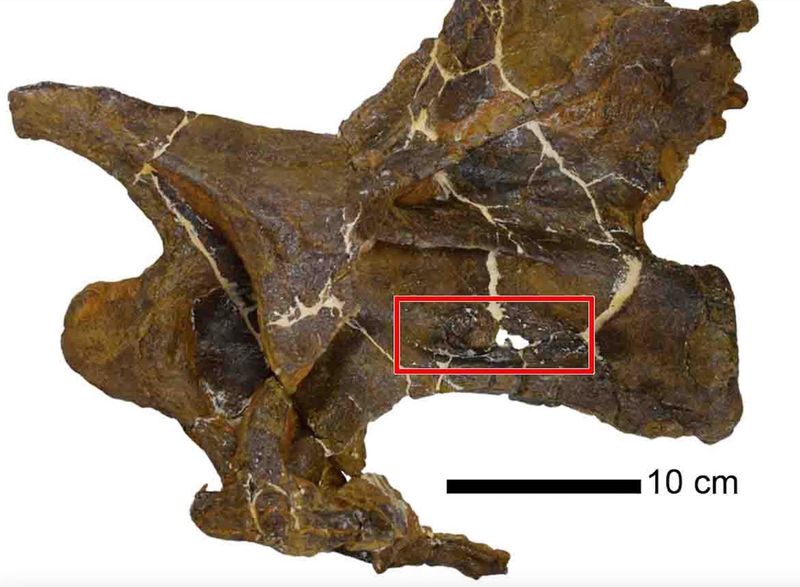 The fossilized bones of a young dinosaur show evidence of a respiratory infection that may have caused familiar flu-like symptoms — fever, coughing and trouble breathing.

Dolly, as she's been dubbed by researchers, was an immature diplodocid — a large, long-necked plant-eating sauropod. Her remains were found in southwest Montana and date back about 150 million years to the late Jurassic period.

Close examination of three of Dolly's neck bones revealed never-before-seen protrusions with an unusual shape and texture. The abnormal growths were in an area that would have been penetrated by air-filled sacs connected to Dolly's lungs.

CT imaging revealed the protrusions were made of abnormal bone that most likely formed in response to a respiratory infection.

"Given the likely symptoms this animal suffered from, holding these infected bones in your hands, you can't help but feel sorry for Dolly," said Cary Woodruff, director of paleontology at the Great Plains Dinosaur Museum in Malta, Montana.

"We've all experienced these same symptoms — coughing, trouble breathing, a fever, etc. — and here's a 150-million-year-old dinosaur that likely felt as miserable as we all do when we're sick," Woodruff said in a news release from Ohio University.

The discovery, possibly the first evidence of a unique respiratory infection in a dinosaur, adds to understanding of the illnesses that occurred in dinosaurs, according to the authors of the study, which was published Feb. 10 in the journal Scientific Reports.

The researchers speculate that Dolly's illness could have been caused by a fungal infection similar to aspergillosis. It's a common respiratory disease that affects modern-day birds and reptiles. It can cause bone infections.

If untreated, aspergillosis can be fatal in birds, so it's possible that a similar infection in Dolly could have ultimately caused her death, Woodruff and his colleagues suggested.

"This fossil infection in Dolly not only helps us trace the evolutionary history of respiratory-related diseases back in time, but gives us a better understanding of what kinds of diseases dinosaurs were susceptible to," Woodruff explained.

There's more on aspergillosis at the U.S. Centers for Disease Control and Prevention.