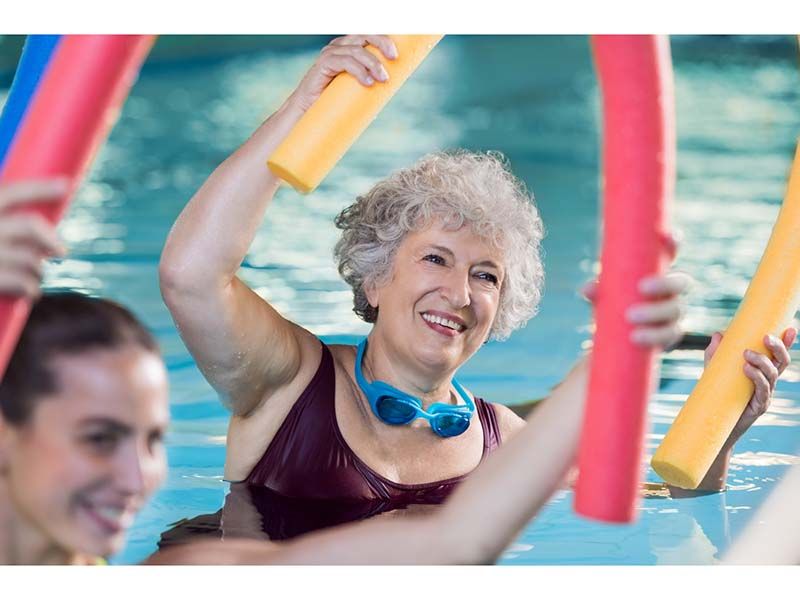 Exercise helps you stay fit, hale and hearty, and researchers say it may also help you stave off dementia and Alzheimer's disease. Now they have a better understanding of the hidden benefits that aid the brain.

Older folks who are more physically active have higher levels of a protein that promotes better communication between the brain's synapses, a new study reports.

"Synapses are these critical communicating junctions between nerve cells. They're what sends the message from one nerve cell to another, and I think of them as where the magic happens when it comes to cognition," said lead researcher Kaitlin Casaletto, an assistant professor of neurology with the University of California, San Francisco. "All of our thinking and memory occurs as a result of these synaptic communications."

Even people in their 80s and 90s whose brains were riddled with amyloid plaques and tau tangles -- the toxic hallmarks of Alzheimer's -- contained higher levels of these synaptic proteins if they were more active, researchers found.

The synaptic proteins are involved with the production and release of neurotransmitters, the biochemicals in the brain that promote communication between nerve cells, Casaletto said.

"We think having more of these proteins suggests that maybe you have more synapses and/or maybe your synapses are working a little bit better," Casaletto said. "You're getting more of that juice into the brain and facilitating communications."

This study involved more than 400 elderly people who agreed to wear monitors that tracked their amount of daily physical activity. They were all participants in the Rush University Memory and Aging Project, a long-term effort to identify the causes of Alzheimer's and dementia.

Researchers already had discovered that people within this group who had greater levels of physical activity also tended to have better cognitive performance and a reduced risk of dementia, Casaletto said.

The next step was to figure out why that was. Brain autopsies provided answers.

"We followed these adults until death. They donated their brains to the autopsy program, and we were able to look at the brain tissue after death," Casaletto said. The average age of death among participants was 90.

Autopsies revealed higher levels of synaptic proteins in the brains of those who, while they lived, tended to move around more in their day-to-day lives, researchers said.

"We saw a pretty linear relationship. The more activity, the higher the synaptic protein levels. To me, this suggests every movement counts," Casaletto said.

These levels were elevated even among people who had physical evidence of Alzheimer's in their brains.

"The capacity of the elderly brain to mount this healthy response to activity might help buffer these age-related brain changes and help promote cognition," Casaletto said.

Further, researchers found these elevated levels of synaptic proteins in six regions of the brain -- not only in the memory center, but in other parts related to thought and reasoning as well.

"It suggests it's more of a whole-brain phenomenon," Casaletto said.

As people age, their brains tend to accumulate toxic proteins like amyloid beta and tau, the researchers said in background notes. As these proteins form clumps and tangles, they can interfere with synaptic communication between nerve cells and eventually cause the synapses and neurons to fall apart.

The findings suggest that physical activity can promote resilience in the brain, said Heather Snyder, vice president of medical and scientific relations at the Alzheimer's Association.

A steady flow of neurotransmitters from these proteins might add up to better synaptic function for aging brains, maintaining communication between nerve cells despite the interference from toxic amyloid and tau.

"If you can keep brain cells healthy and communicating longer, you may slow the changes you would see in disease or you may be able to decrease the vulnerability of the brain to other injury or other insult," Snyder said.

The study didn't measure the vigor of each person's physical activity, only how much they tended to move during the day, Casaletto said.

There are any number of activities you could pursue to promote brain health, Snyder said, such as ballroom dancing, neighborhood walks or riding a stationary bike at home.

The new study was published Jan. 7 in Alzheimer's & Dementia: The Journal of the Alzheimer's Association.

The Cleveland Clinic has more about exercise and brain health.