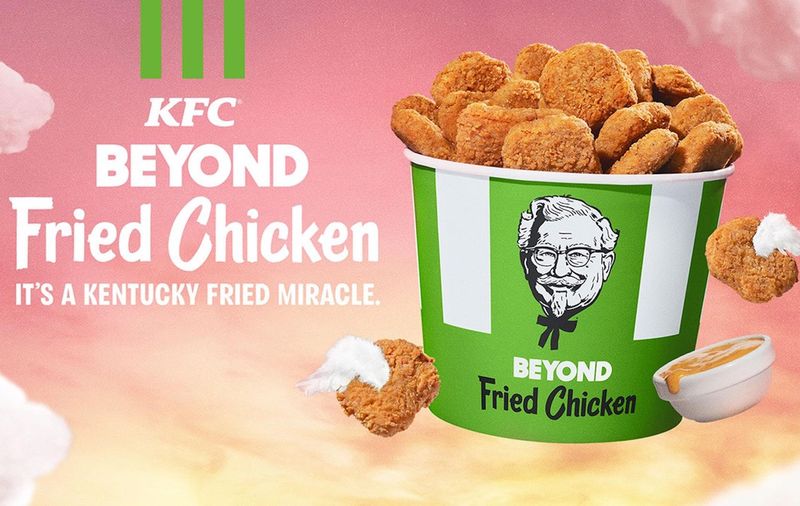 First, there was Beyond Meat. Next up? Beyond Fried Chicken.

KFC announced Wednesday that it will begin offering a plant-based chicken in some of its meals on Jan. 10, from the same company known for its meat-free burgers, Beyond Meat.

Beyond Fried Chicken was developed by Beyond Meat exclusively for KFC, according to a news release from KFC. It was initially offered in 2019 at one Atlanta restaurant before expanding to three states and now to 4,000 restaurants around the country.

Customers can get their plant-based chicken as part of a combo meal or a la carte in six- or 12-piece orders.

"The mission from day one was simple -- make the world-famous Kentucky Fried Chicken from plants," Kevin Hochman, president of KFC U.S., said in the release. "And now over two years later we can say, 'Mission accomplished.'"

Yum Brands owns both KFC and Taco Bell, which is also working with Beyond Meat to create some products for those eateries, according to CBS News. Beyond Meat recently hired two former executives from Tyson Foods, a company known for its chicken.

"We couldn't be prouder to partner with KFC to offer a best-in-class product that not only delivers the delicious experience consumers expect from this iconic chain, but also provides the added benefits of plant-based meat," Ethan Brown, founder and CEO of Beyond Meat, said in the release. "We are truly thrilled to make it available to consumers nationwide."

There has been an increased demand for plant-derived foods, with major chains including McDonald's and Starbucks partnering with Beyond Meat and competitor Impossible Foods to offer additional options, CBS News reported. On Monday, Chipotle began offering plant-based chorizo for a limited time.

"It's no longer fringe for a company to be doing this -- it's becoming mainstream, and more are seeing it as a necessity" to offer plant-based options, Sean Cash told the Washington Post. He's an economist with the Friedman School of Nutrition Science and Policy at Tufts University in Boston.

And the trend is not confined to restaurants, Cash added. As the pandemic pushed consumers to cook and eat at home, more meat alternatives were available in some grocery stores. Also, supply chain issues with traditional meats may have led consumers to try alternatives.

Fast food chains are "targeting the still relatively small but rapidly growing segment of the population interested in plant-based alternatives to meat, which is increasingly understood to be potentially harmful to health and the environment," Marion Nestle, a professor emerita of nutrition, food studies and public health at New York University, told the Post.

Companies "must think there is a market for plant-based alternatives and want to bring people who want these alternatives into their stores," Nestle added.

The U.S. Department of Agriculture has more information on vegetarian-based diets.