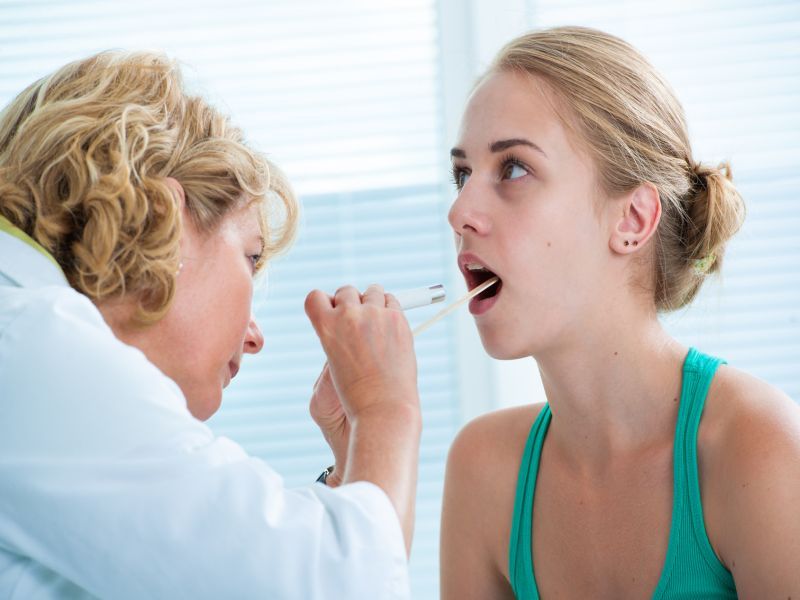 You might have heard a lot about the human papillomavirus (HPV) and its role in cervical cancer, but this sexually transmitted virus can also cause another type of cancer.

Rates of oropharyngeal cancer, which occurs in the middle part of the throat, are rising rapidly among older men throughout the United States. They're also growing among women in the Southeast and Midwest.

Investigators from University of Texas Health School of Public Health have been examining the occurrence of these cases, finding also that people diagnosed with large tumors and the death rate related to this have increased in the past decade.

"Ten, 15 or 20 years ago, what we observed was that the oropharyngeal cancer incidents were largely an issue among young individuals," said study author Ashish Deshmukh. "Now there's a shift that we are seeing a decrease or a stabilization among young and middle-age groups, but among older individuals, now the increases are more rapid."

It can take years for an HPV infection to transition into throat cancer, said Deshmukh, an associate professor in the Department of Management, Policy and Community Health.

"The rise that we are seeing among elderly individuals now, it's likely driven by the infections that they might have acquired early on in their life," Deshmukh said.

Doctors diagnose nearly 20,000 cases of this type of cancer in the United States each year, according to the study.

Using national cancer statistics and death data, researchers found more than 260,000 cases of oropharyngeal cancer and nearly 111,300 deaths between 2001 and 2017.

Incidence in men rose almost 3% annually, with notable jumps among white men, men 65 and up and men in the Midwest and Southeast. South Dakota, Kansas and Iowa saw bumps of 4% or more.

Women in the Midwest and Southeast regions had a 2% average annual increase, including about 3% in Louisiana.

More than 70% of these types of cancers are caused by HPV. More than 90% could potentially be prevented if the current generation of teens and preteens received their HPV vaccine doses, the researchers said.

The HPV vaccine needs to be administered before you contract the virus. The U.S. Centers for Disease Control and Prevention recommends giving it to boys and girls between ages 11 and 12 -- before the start of sexual activity.

Current vaccination rates are not enough, Deshmukh said. In the United States, about 55% of the eligible population was vaccinated by 2019.

The goal is 80%, and Deshmukh said if the nation can reach that rate in the next five years, it can prevent nearly 1 million of these throat cancer cases during the 21st century.

But looking at state-level HPV vaccination coverage, Midwestern and Southeastern states are lagging behind substantially, he noted.

"I think what we're seeing now that you have older patients getting HPV-related throat cancer is a confluence of factors," said Dr. Allen Ho, director of the head and neck cancer program at the Cedars-Sinai Comprehensive Cancer Institute in Los Angeles. "You have a Baby Boom generation that is perhaps not as monogamous as prior generations, so there are higher numbers of sexual partners and therefore higher chances or opportunities for infection or transmission."

Ho said it makes some sense that the HPV-related throat cancer rates are outpacing cervical cancer rates because vaccination rates for females has been gaining steam for some time.

"You haven't quite seen as much of an uptake in HPV vaccination in men," Ho said, suggesting there has been more marketing and perhaps acceptance of the vaccine for women.

Among the barriers is that the vaccine is given in two or three doses, depending on age, and if your insurance doesn't cover the vaccine, it can be expensive. Another barrier may be reluctance to talk about the vaccine because of stigma about the virus being sexually transmitted.

While the study sheds light on the issue, it also creates questions because there are still many unknowns, said Dr. Ashwatha Narayana, chairman of radiation oncology at Northern Westchester Hospital Cancer Treatment and Wellness Center in Mount Kisco, N.Y.

This age group could be seeing more of this cancer in part because of other conditions or medications that are increasing risks in conjunction with HPV, Narayana said, citing one hypothesis.

"It opens a lot of questions. I think we need much more data," Narayana said. "But I do think it's a very important study, very thought-provoking."

The U.S. Centers for Disease Control and Prevention has more on human papillomavirus.