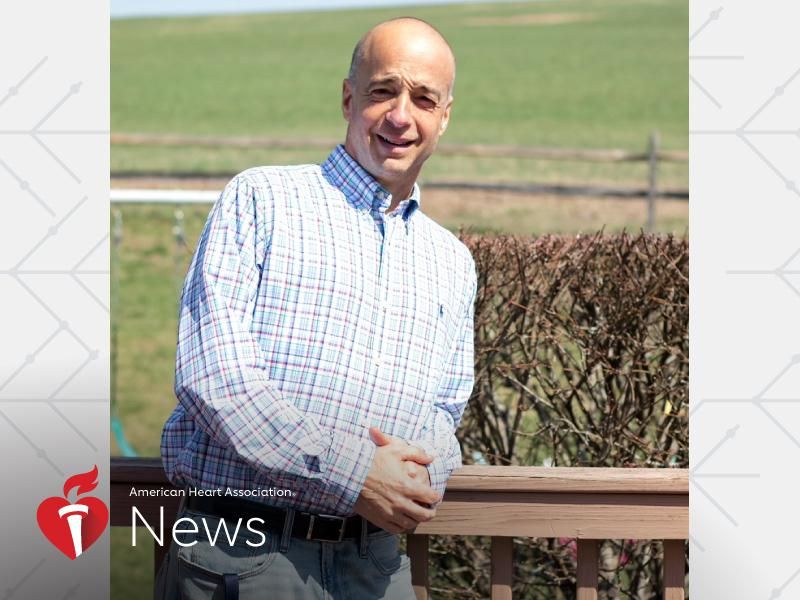 Michael Capalbo was standing in an aisle at the pharmacy chain where he was a manager when he felt an intense burning sensation raging across his chest from shoulder to shoulder.

He texted his supervisor. She rushed to call 911 and get Capalbo aspirin. Sitting on a chair waiting, Capalbo felt his body tighten. His arms and fingers started to curl up. He couldn't straighten them.

Capalbo remembers sitting in an ambulance outside of the store. His next memory is from two days later, when he woke up in the intensive care unit.

"You are a miracle," a cardiologist told him. "If you'd been home alone, you'd be dead."

Capalbo had a heart attack brought on by a 100% blockage of the left anterior descending artery, which carries blood into the heart. Through a minimally invasive cardiac catheterization procedure, the cardiologist had inserted a stent to reopen the clogged artery.

Capalbo blames himself for letting it get clogged.

Then 52, the native of Middlebury, Connecticut, felt symptoms for more than a year – intermittent tingling in his right arm, blurry vision in his left eye and chest pains. He blamed the chest pain on indigestion. He started popping antacid pills daily.

He'd been smoking for about three years, after a decade of quitting. He never exercised and followed an unhealthy diet.

"I was living the single life, going out just about every night and eating pizza and burgers and wings and drinking a beer or two," he said.

During a typical day, he'd drink two tall cans of sweetened iced tea and eat half a bag of cookies.

And then there was his family history. His father and grandfather died of heart attacks. Both his siblings had heart attacks; his older brother also survived a massive stroke.

"I was arrogant and ignorant to ignore the warning signs," Capalbo said. "I just didn't think it would happen to me, or at least that's what I told myself."

Because his heart attack occurred in April 2020, just at the start of COVID-19 pandemic restrictions, Capalbo couldn't have visitors. But he talked to his daughter every day.

"I was six weeks from not seeing my daughter graduate high school," he said. "That's what made me say, 'All right, this lifestyle is over.' As crazy as it sounds, having that heart attack is the best thing that ever happened to me."

In the year and a half since leaving the hospital, Capalbo has not smoked a cigarette or eaten red meat. He cut out white starches, cooks his own meals and has lost 40 pounds.

At the start of his recovery, he could walk only down his driveway. Then down the street. He eventually worked his way up to circling the block. Now he walks 4 to 5 miles several times a week.

One of his first outings was a visit to the ambulance service that took him to the hospital. He wanted to thank them and hoped to hear what happened during the ride.

The young man who answered the door happened to be the EMT who treated him.

"I can't believe you're standing here!" he cried out, hugging Capalbo.

He told Capalbo that he'd stopped breathing during the ride. He was given CPR and resuscitated with a defibrillator.

"After that I felt even more grateful to be alive," Capalbo said.

The start of his cardiac rehabilitation was delayed by the pandemic. Once it began, he was introduced to equipment he'd never used before – a treadmill, stationary bike and elliptical trainer. He also learned more about diet and nutrition. He's since joined a gym.

"Now I love to cook, and I love to work out," he said. "Those are two things that were not even close to being a part of my life before."

His favorite dishes are balsamic chicken and lemon pepper chicken.

"You know the memes making fun of people posting on Facebook every time they make dinner? That's me," he said. "The best part is I've heard from friends who say I've inspired them to get healthier."

His former wife, Donna Capalbo, said Michael's change was "like flipping a switch."

"He's definitely a different person," she said. She and their daughter get a kick out of seeing his meals on social media, since he never cooked when they all lived together.

"I exercise more and go walking with friends," she said. "You watch him make chicken and fish every night and it's hard to heat up a frozen dinner."