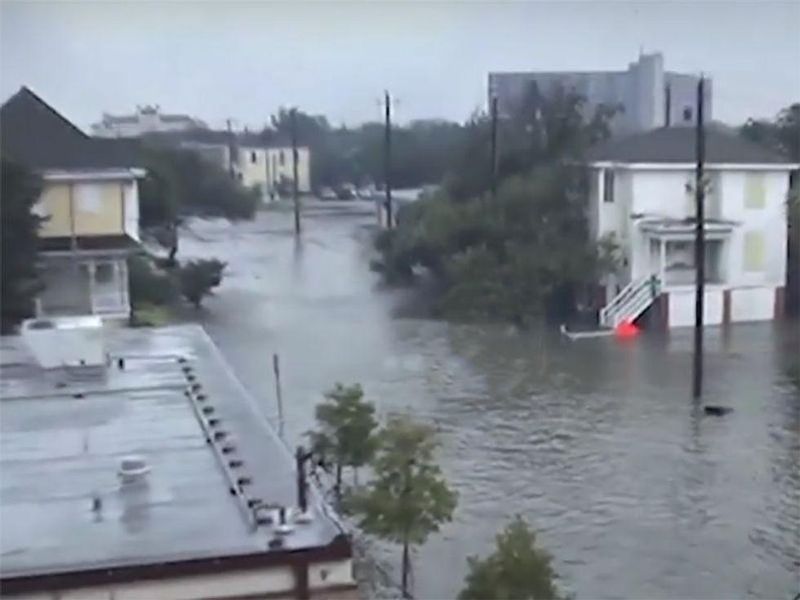 The rings of stately pines on the coasts of North and South Carolina offer telling long-term evidence of climate change and a chilling forecast for the future.

The upshot: The last 300 years have gotten wetter and wetter, making hurricanes ever more dangerous.

"Our findings suggest that the maximum amount of rainfall from these storms is increasing and is likely going to continue to do so in a warmer world," said Justin Maxwell, a climatologist at Indiana University Bloomington, who led the new study.

Heavier storms are especially risky for coastal cities with lots of hard surfaces that don't allow water to seep into the ground, he said.

Potential dangers include infectious diseases from bacteria and disease-carrying organisms in floodwater, as well as flood-related injuries. In addition, chemical spills — a risk when industrial facilities are flooded — may release toxic chemicals into nearby water and air.

For the study, Maxwell's team analyzed tree rings from longleaf pine trees on the Carolinas' coast to see if rainfall has gotten heavier during the past 300 years. Until now, data went only as far back as 1948. But tree-ring data can reveal not only a tree's age but also the weather history where it grew.

The reconstruction revealed hurricane-related rainfall since the year 1700 rose between 2.5 and 5 inches during extreme years.

"An increase of 2.5 to 5 inches of rain is a lot and will present problems for cities as this trend continues," Maxwell said.

Rainfall totals correlated with average hurricane length and speed, suggesting that the increased rainfall is due to the slowing of storms.

"They are more likely to stall and are hovering in one location longer, producing more rain," Maxwell said.

Climate change and global warming could be driving these trends, he said.

"A warmer world leads to weaker global winds and when these winds are weaker, tropical cyclones are more likely to meander and stall in a small area, which will result in more rainfall for that location," Maxwell explained.

Most of the increase in hurricane-generated rainfall occurred during the last 60 years, he noted. Infamous examples of slow-moving storms are Hurricane Harvey in 2017 and Hurricane Florence in 2018.

"Recent hurricanes Ida and Nicholas were also slow-moving storms that produced high rainfall totals and widespread flooding," he said. "We expect these types of storms to be more common in a warmer world."

Being forewarned is forearmed, Maxwell said.

"Having an understanding that these storms are getting wetter can help coastal committees be more prepared for flooding," he said.

The findings were published in the Oct. 12 issue of the Proceedings of the National Academy of Sciences.

While the study looked only at the Carolinas, there is some evidence that extreme rainfall has been increasing over the United States in general, according to Tom Knutson, leader of the Weather and Climate Dynamic Division at the National Oceanic and Atmospheric Administration in Princeton, N.J. He reviewed the findings.

The dangers of inland flooding are real and should be taken seriously, Knutson said.

He recalled Hurricane Harvey, a devastating category 4 hurricane that claimed more than 100 lives in 2017.

"When Hurricane Harvey stalled out over Houston in 2017, it rained for three days, resulting in more than 3-feet of rain in some areas and lots of flooding and health issues among residents," Knutson said. "Harvey is a classic example of how bad the situation can get when a hurricane stalls out."

A record 18 storms and hurricanes have made landfall in the United States in the past two years, the Washington Post recently reported.

The U.S. Centers for Disease Control and Prevention has information on how to prepare for a flood.