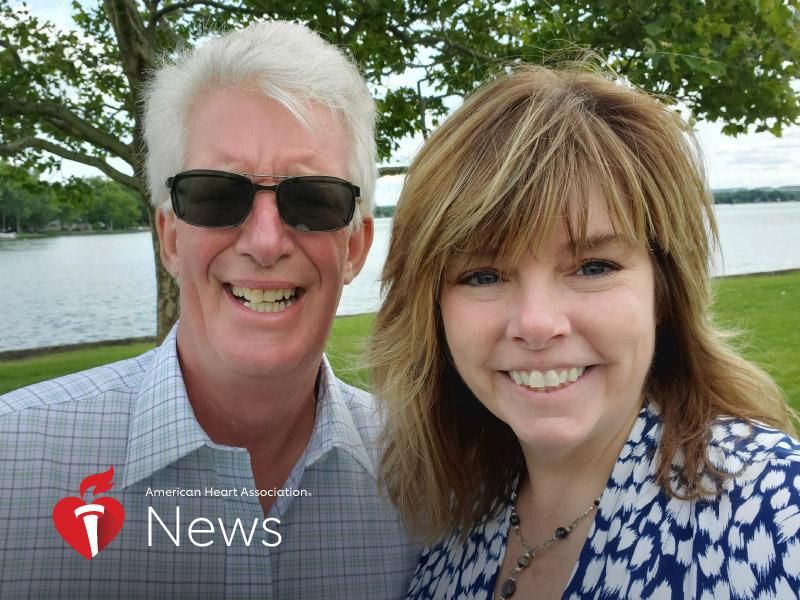 Lisa Wiles was in the kitchen prepping dinner in April 2020 when she heard her husband, Dan, shout an expletive from the other room.

She figured it was a reaction to the news. Still, she went to check on him.

"His eyes weren't focused on anything, and he was making these horrible breathing sounds," Lisa said. "I thought at first he was choking."

She shouted at him to see if he would respond, then ran for the phone to call 911. Dan had problems regulating his heart rhythm at various times in recent years, so she feared the worst.

"The 911 operator could hear the sounds he was making and said, 'You have to start CPR,'" Lisa recalled.

Dan, then 57, was in cardiac arrest. Lisa, then 51, had CPR training nearly two decades earlier. With the 911 operator instructing her, Lisa dragged Dan onto the floor and began compressions.

"My hands knew what to do," Lisa said. "I started CPR and (the operator) counted for me."

A few minutes later, an officer from the Onondaga County Sheriff's Department burst through the door of their home outside Syracuse, New York, and hooked up an automated external defibrillator. When the machine indicated Dan's heart wasn't in a shockable rhythm, they continued with CPR until a second sheriff's officer arrived and relieved Lisa.

"I had no idea how tiring it was," Lisa said.

Because of the COVID-19 pandemic, Lisa was allowed only a brief visit in the ER. A nurse warned her that he was sometimes confused and repeating himself.

As Lisa walked in, Dan pointed at his chest, motioning to ask if she had done CPR.

"I said 'yes' and he began to cry," she said. "I didn't see him again until he was released five days later."

The couple learned Dan experienced atrial fibrillation and then his heart went into ventricular tachycardia, an abnormal rhythm in the heart's lower chambers, causing the cardiac arrest.

After his cardiac arrest, doctors placed an implantable cardioverter defibrillator to shock his heart if it goes into a life-threatening abnormal rhythm again.

Dan spent three months puttering around the house as he recovered. It wasn't until several months later that the weight of what he'd experienced sunk in.

"I was basically dead and now I had a second chance at life," he said. "It's overwhelming, what she did for me and how she functioned in that situation. I would like to think I would do the exact same thing."

Dan had trouble sleeping, so he sought help from a therapist. He also dealt with an ordeal that was trying both physically and emotionally: jumping into an icy pond during the winter to rescue Quincy, the 55-pound German Shepherd the couple adopted as a puppy during Dan's recovery. Dan hoisted out Quincy, then climbed out himself.

"It was a great test for how well my heart was working," he said. (As for Quincy, he fully recovered.)

For months following her lifesaving act, Lisa came away grappling with anxiety and fear that Dan's heart might stop again.

"It took me about 10 months before I really felt like myself," she said. "I'm so grateful for the outcome, but I'm never going to forget his eyes or those sounds and what happened in that room."

Lisa found solace in learning more about CPR. She was surprised by the extremes of the statistics: About 9 in 10 people who have a cardiac arrest outside the hospital die; however, for those who receive CPR in the first few minutes of a cardiac arrest, their chances of survival can double or triple.

About 70% of the estimated 350,000 cardiac arrests that occur outside hospitals each year happen at home, but half of those patients don't get help from bystanders before an ambulance arrives.

As the couple approached the anniversary of Dan's cardiac arrest, they decided to celebrate by organizing community CPR classes led by one of the paramedics at Marcellus Ambulance Volunteer Emergency Services (MAVES) who responded to Lisa's 911 call.

Lisa promoted the class on social media and got so much interest that they ended up organizing a class in Marcellus and two in Rochester. Between the classes, 51 attendees became trained in CPR and AEDs.

"That's 51 people in the community who now know what to do and will take action in an emergency," Lisa said.

Additionally, five of their nieces walked a marathon along the Erie Canal, where Dan worked as a boat captain for 35 years, raising $3,500 to buy equipment for MAVES.

"If Lisa didn't do CPR, I wouldn't be here," said Dan, who has renewed the CPR training he first earned decades ago. "I am alive today because a zillion things had to go perfectly and they did, and it all started with CPR."