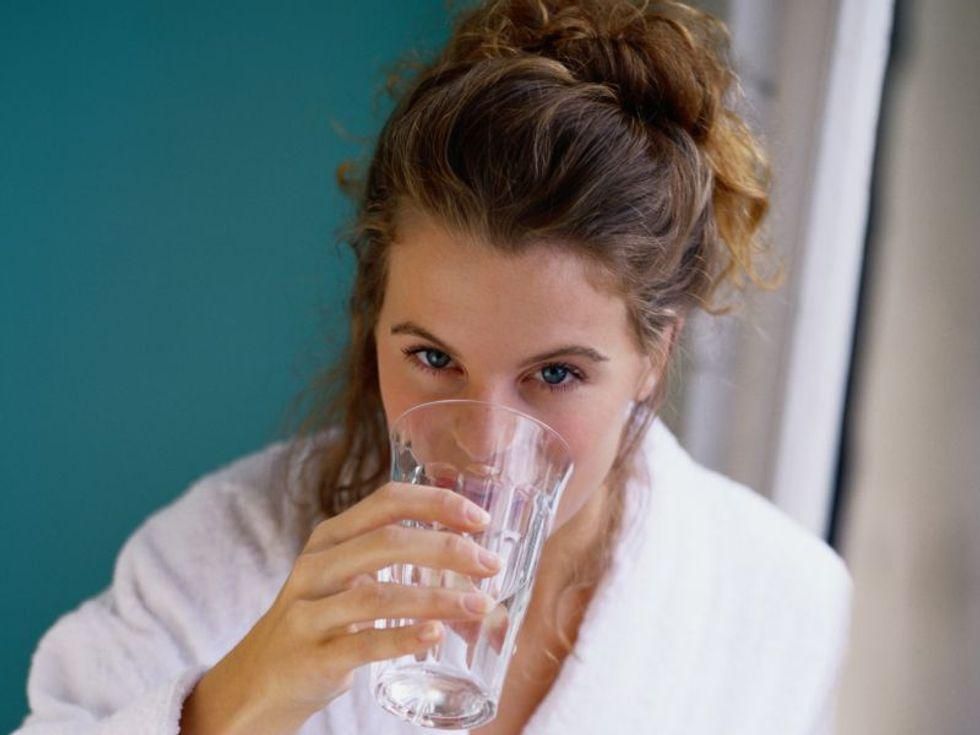 Everyone knows that drinking plenty of water every day can improve your health in a myriad of ways, but here's a lesser-known benefit: New research suggests that middle-aged adults can lower their long-term risk for heart failure by simply drinking enough water on a daily basis.

The finding follows an analysis that stacked heart health up against blood salt levels — an indicator for overall fluid intake — among nearly 16,000 middle-aged men and women over a 25-year period.

"The importance of hydration has been on the cardiovascular radar for a long time," noted study author Natalia Dmitrieva, a senior researcher with the U.S. National Heart, Lung, and Blood Institute.

Dmitrieva said it has to do with the way the lack of liquid intake can affect an individual's sodium (salt) balance, hormone levels and kidney function in ways that may ultimately undermine proper heart function.

Specifically, she cited problems that can begin when a lack of fluid intake ends up driving a person's blood salt levels above a specific threshold (namely, 142 millimoles per liter [mmol/L]).

For their study, Dmitrieva and her colleagues used that threshold as a reliable indicator of an individual's overall hydration status, even though by current standards that level would typically be deemed to be within the "normal range" for blood sodium.

But the study team settled on that trigger point because when salt levels exceed that, a "hormone is secreted from the brain. This hormone acts on the kidney to activate water preservation mechanisms," Dmitrieva said.

And elevated blood pressure isn't the only cardiovascular threat posed by dehydration, she noted. Because over time, insufficient fluid intake can also directly undermine the cellular integrity of the heart muscle itself.

But the good news is that the "study suggests that maintaining good hydration can prevent or at least slow down the changes within the heart that lead to heart failure," Dmitrieva noted.

All the study participants were between the ages of 44 and 66 when they were first enrolled in the study.

Each participant's salt levels were evaluated five times over the following 25 years, as participants aged up to between 70 and 90 years.

Participants were then grouped into five different blood sodium level categories, according to their results, ranging from a low of between 135 to 139.5 mmol/L to a high of between 144 to 146 mmol/L.

The study team then tracked heart failure incidence — along with problems with the heart's left ventricular pumping capacity — over the ensuing years.

The result: those whose blood sodium levels had exceeded 142 mmol/L in middle age saw their risk for both heart issues surge when they hit age 70 and older.

Going forward, said Dmitrieva, the hydration threshold identified by her team could "potentially be used by physicians during regular physical exams to identify patients who should be evaluated for their drinking habits, and to make recommendations to increase the intake of fluids if this evaluation finds that the patient's liquid consumption is low."

So how much liquid should middle-aged men and women ideally drink on a daily basis to protect their hearts?

"Recommendations vary in different countries," Dmitrieva stressed, with the Institute of Medicine in the United States recommending a liquid intake at just under 3.2 quarts for men, and just over 2 quarts for women.

"These data in the abstract are interesting," said Eckel, but are not definitive proof that drinking more water is protective of cardiovascular health.

The findings "are only hypothesis-generating to address whether more fluid intake would reduce the risk for left-ventricle health and heart failure," he noted, warning that "too much fluid in the wrong patient could be harmful."

Dmitrieva and her colleagues were scheduled to present their findings at the virtual annual meeting of the European Society of Cardiology, Aug. 27 to 30. Research presented at medical meetings should be viewed as preliminary until published in a peer-reviewed journal.

There's more on how water can affect health at The Heart Foundation.