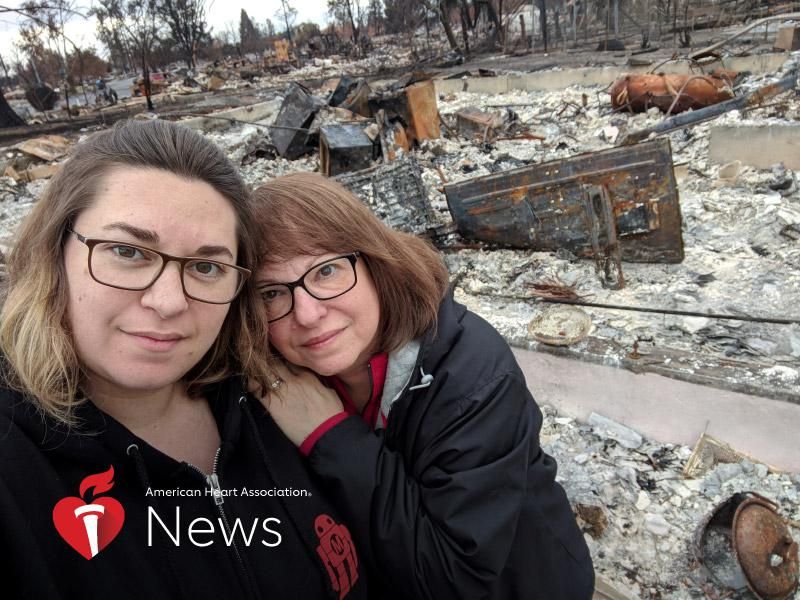 Melissa Geissinger didn't believe she was in danger. But when the cat at the foot of her bed lifted its head to sniff the air, she felt her first stab of worry. She stepped outside her home in Santa Rosa, California, and there it was: the choking smell of smoke.

Then came the phone alert – the wildfires she thought too far away had jumped the highway and were heading straight toward her. Seven months pregnant, she grabbed both her cats, her two dogs and a few belongings and fled with her husband, blowing the car horn to alert the neighbors.

It's been nearly four years since the Tubbs wildfire – one of the most destructive in California's history – obliterated Geissinger's neighborhood, along with more than 36,000 acres of wine country. In the months that followed, she had severe anxiety and panic attacks, waking in the middle of the night with chills. She sought counseling, but she continues to have anxiety from seemingly endless reports of fires that return each year.

"Knowing that a fire is coming is a trigger," said Geissinger, who moved back into her rebuilt home last year. "I am not OK. Right after it happened, it was like, OK, that was a freak event. Then the year after that, it was, oh wait, this is the new normal now."

Over the past two decades, more than 70,000 wildfires have ravaged an average 7 million acres annually in the U.S., according to statistics from the National Interagency Coordination Center. That destructive pace is twice the annual average of acres lost in the 1990s. The largest and most destructive are on the West Coast, where 9.5 million acres burned last year alone. Worldwide, fires of unprecedented scale and duration have destroyed tens of millions of acres more in Australia, Brazil and Canada.

Climate experts say a warming planet creates increasingly hotter and drier conditions, along with greater wind speeds that fuel the fires. They project it could get worse, with longer and more intense wildfire seasons that bring damaging health consequences, including respiratory and cardiovascular issues related to smoke and air pollution. But the harm goes deeper: Wildfires also pose myriad mental health threats that can last long after the flames are extinguished.

"Most people are resilient and can recover," said Susan Clayton, a professor of psychology at Ohio's College of Wooster. "But a significant number of people have trouble with PTSD or increases in anxiety and depression, and that can last even after the community has rebuilt."

Even those who don't live near the fires but see news reports of the destruction of places like the Pacific Northwest or the Australian outback can be affected, said Clayton, whose research focuses on the psychological impact of climate change. "Their fundamental understanding of the world is being threatened in some way."

"Whenever a disaster like this happens, there are always acute psychological effects," said Jyoti Mishra, an assistant professor in the department of psychiatry at the University of California, San Diego. "But to feel that way six months out is not normal. That is when we know chronic illness has set in and there are mental health symptoms we need to worry about."

Long-lasting psychological distress, in turn, can lead to damage to the heart and brain. Chronic stress releases high levels of the hormone cortisol, which raises blood pressure and the risk for heart disease. High blood pressure also raises the risk for cognitive problems such as dementia.

Mishra led a case study of one of the world's deadliest wildfires, the Camp Fire of 2018, which killed 85 people in northern California and burned more than 153,000 acres. Her research, published in the International Journal of Environmental Research and Public Health, concluded that direct exposure to the fire significantly increased the risk for long-term mental health disorders, such as PTSD and depression.

Even the loss of surrounding landscape can affect people's mental health, said Dr. David Eisenman, director of the Center for Public Health and Disasters at the University of California, Los Angeles.

"Now they don't have access to the landscape that gave them spiritual solace, recreational activities, opportunities to meet with family and socialize, sometimes even gather the food they eat through hunting or fishing," said Eisenman, who also is deputy director of the Center for Healthy Climate Solutions at UCLA.

There's a word for the pain of losing psychological and spiritual solace caused by landscape destruction, said Eisenman. "It's called solastalgia."

Eisenman led a study published in EcoHealth about the psychological impact on people in five towns living near the 2011 Wallow Fire, which destroyed more than half a million acres of forest near the Arizona-New Mexico border. Those who took the most solace from the surrounding landscape suffered the greatest distress from its destruction, even if they didn't experience property loss or injury from the fires.

"People said they felt like they were mourning the loss of a loved one," he said. "You could hear the bereavement in their voices."

Helping with forest restoration may be healing for people with solastalgia, Eisenman said. "We have a theory that people can still engage in the landscape even when it's burnt out and use that in healing fashion. Just being outside and connecting with the land might help."

For those coping with the ongoing stress of recurring fires, having a plan in place for how to safely evacuate can alleviate mental health symptoms, Mishra said. The more social support that plan includes, the better.

"Vulnerable communities need to come up with plans for how to support each other as we go through these experiences," she said. "If a person feels isolated, that's not any good coming at the same time as these disasters."

Support has been crucial for Geissinger, who has dealt with layer upon layer of stress. Two months after evacuating, her son was born with a heart defect that required multiple surgeries.

Her community came together in the wake of the fire, creating formal and informal networks. They created social media pages "and emergency evacuation plans, and everybody has a go-bag now ready by the door," she said. "Everyone on our street stays in touch and alerts each other. Everybody has each other's personal contact information. Four years ago, the only thing I could do was honk."