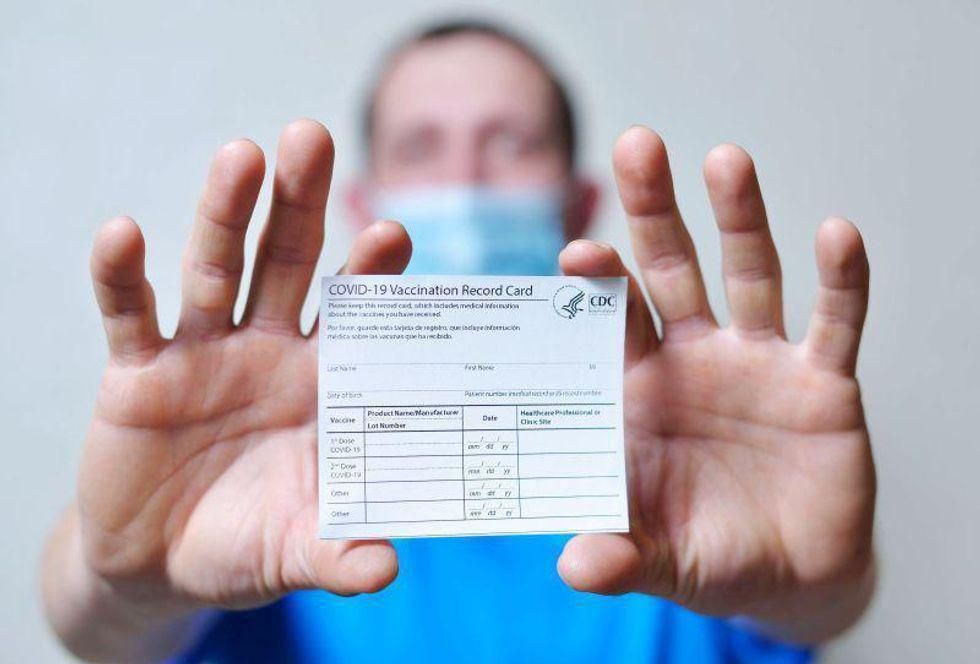 President Joe Biden's goal of getting at least one COVID-19 shot into the arms of 70% of American adults was finally reached on Monday.

The milestone came a month late, and arrived amid a fierce case surge fueled by the Delta variant that is filling up hospital beds around the country.

In a major reversal, Louisiana ordered nearly everyone, vaccinated or not, to wear masks again in all indoor public settings, as other cities and states also reinstated social distancing measures to counter the fast-spreading variant and vaccine resistance.

"As quickly as we can discharge them, they're coming in and they're coming in very sick. We started seeing entire families come down," Dr. Sergio Segarra, chief medical officer of Baptist Hospital Miami, told the Associated Press. The Florida hospital chain reported a 140% jump in the past two weeks in the number of COVID-19 hospitalizations.

After reaching the 70% mark nationally, there was little celebration at the White House: Instead, the administration continues to work to overcome skepticism about the vaccine, especially in the South and other rural and conservative areas.

Some places around the country are witnessing caseloads reach their highest levels since the pandemic began. And nearly all deaths and serious illnesses are now in unvaccinated people.

The surge has prompted many states and cities to batten down the hatches as they issue masking and vaccination mandates.

Health officials in San Francisco and six other Bay Area counties announced Monday they are reinstating a requirement that everyone — vaccinated or not — wear masks in public indoor spaces, the AP reported.

Minnesota's public colleges and universities will require masks indoors, regardless of vaccination status. New Jersey said workers at state-run nursing homes, psychiatric hospitals and other such institutions must get the shot or face regular testing, the AP said. North Carolina's governor ordered state employees in the agencies under his control to cover up indoors if they are not fully vaccinated.

In New York, Gov. Andrew Cuomo said New York City airport and transit workers will have to get vaccinated or face weekly testing. And Denver's mayor said the city will require police officers, firefighters and certain other municipal employees to get vaccinated, along with workers at schools, nursing homes, hospitals and jails.

In Florida, it took two months last summer for the number of people in the hospital with COVID-19 to jump from 2,000 to 10,000. It took only 27 days this summer for Florida hospitals to see that same increase, Florida Hospital Association President Mary Mayhew told the AP. She noted that this time, 96% of hospitalized COVID-19 patients are unvaccinated and they are far younger, many of them in their 20s and 30s.

More "pain and suffering" is coming as coronavirus cases climb in the United States, Dr. Anthony Fauci warned Sunday, but additional lockdowns are unlikely because enough Americans are now vaccinated to avoid the level of surge seen last winter.

Just days ago, the U.S. Centers for Disease Control and Prevention reversed course to recommend that even vaccinated people return to wearing masks indoors in parts of the country where the highly contagious Delta variant is fueling infections. In making the switch, federal health officials pointed to studies showing vaccinated people can spread the virus to others.

Most new infections continue to strike unvaccinated people, but breakthrough infections can occur in vaccinated people. While the vast majority of those cases are mild or cause no symptoms, new research shows the vaccinated can carry nearly the same amount of the virus as those who did not get the shots.

"So we're looking, not, I believe, to lockdown, but we're looking to some pain and suffering in the future because we're seeing the cases go up, which is the reason why we keep saying over and over again, the solution to this is get vaccinated and this would not be happening," Fauci said on ABC's "This Week."

Luckily, vaccinations are up 56% in the past two weeks, as more people roll up their sleeves amid the threat of the Delta variant, Dr. Francis Collins, director of the National Institutes of Health, told CNN on Sunday.

Louisiana alone, which has the most new cases per capita among all states in the past 14 days, has seen vaccinations climb threefold over that same period, Collins noted.

"That's what desperately needs to happen if we are going to get this Delta variant put back in its place, because right now it's having a pretty big party in the middle of the country," Collins said.

Collins added that the shots are working "extremely well" and reduce a person's risk of serious illness and hospitalization "25-fold" against the Delta variant. The guidance for vaccinated people to start wearing masks indoors again in places with outbreaks, he said, is mostly meant to protect the unvaccinated and immunocompromised people.

The CDC has also recommended indoor mask-wearing for all teachers, staff, students and visitors at schools nationwide, regardless of vaccination status.