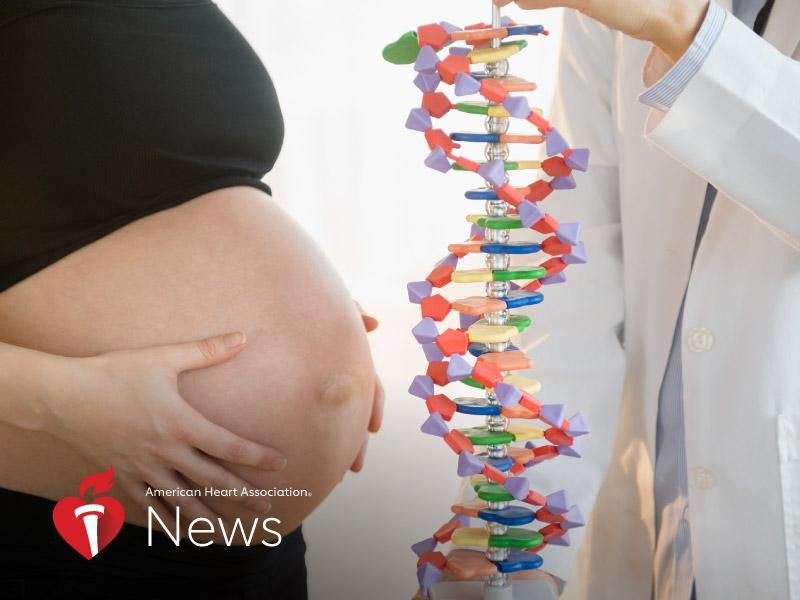 A pregnant woman's diet and other lifestyle factors may change how her baby's genes work in a way that can affect the child's cardiovascular health by age 8 or 9, new research has found.

Nearly half of U.S. adults have some form of cardiovascular disease, including coronary heart disease, heart failure, stroke and high blood pressure, according to American Heart Association statistics. Early intervention can reduce the risk. But it's challenging to identify potential problems early in children who might develop cardiovascular disease later in life.

To meet that challenge, scientists are looking at epigenetics – the study of how the environment and other exposures alter the way a person's genes work – to better predict future heart disease risk.

One of the body's epigenetic mechanisms for changing gene function, without changing the gene itself, is called DNA methylation. During this process, bundles of carbon and hydrogen atoms known as methyl groups attach to a part of a DNA strand. They act like a power switch to turn the gene's expression "on" or "off," making genes more or less active in performing their designated role. Maternal diet, smoking, stress and other environmental factors can influence a child's DNA methylation even before birth.

In the new study, published Monday in the AHA journal Hypertension, researchers from the University of Southampton in England analyzed 470 samples of umbilical cord blood from participants in the Southampton Women's Survey, which gathers health information from women before, during and after their pregnancies. They compared the DNA methylation patterns in the samples with measurements of the children's cardiovascular health at age 8 or 9. The investigators identified 16 sites where methylation altered the expression of genes associated with aorta pulse wave velocity. That is a measure of blood vessel stiffness, which can increase cardiovascular disease risk.

Next, the researchers looked at the possible links between maternal factors and the methylation patterns at the sites. Smoking during pregnancy, diet during pregnancy and weight before and during pregnancy modified those patterns. Specifically, lower consumption of oily fish – like salmon and mackerel – during pregnancy increased childhood pulse wave velocity.

"We were very interested to find that maternal oily fish intake, in both early and late pregnancy, was linked to these epigenetic changes," said Dr. Mark Hanson, British Heart Foundation Professor of Cardiovascular Science and director of the Institute of Developmental Sciences at the University of Southampton. "Oily fish are a source of healthy polyunsaturated fatty acids that are important in the development of cell membranes, including in our blood vessels."

The findings suggest the trajectory of cardiovascular disease risk starts very early, even before we're born, Hanson said. But because the epigenetic process appears to play a role, "there's an opportunity to change this in various ways," he said. "And if we want our kids to have the longest, healthiest lives possible, then we need to help them to develop in a healthy way literally from the moment of conception."

The researchers said because the study included only white children, more research is needed to confirm whether the findings apply to children of other races and ethnicities. But, Hanson said, "there is no reason to think that these results would not apply to other groups."

It's too soon to draw firm conclusions between these epigenetic changes and children's real-world heart health, said Dr. Jennifer Van Eyk, director of the Advanced Clinical Biosystems Institute at Cedars-Sinai Medical Center in Los Angeles. She was not involved in the study.

"The most significant finding is that they correlated specific epigenetic signatures to key health outcomes, and correlations can be important. But one has to be incredibly careful about linking it to cause of disease," said Van Eyk, also the Erika J. Glazer Chair in Women's Heart Health at Cedars-Sinai.

The study hints at broad cellular changes that could have long-term impact, she said, but there are still many steps between identifying DNA methylation patterns and knowing how they actually influence health risks. The epigenetic changes may have both positive and negative effects or have narrow or broad consequences, and scientists are just beginning to understand what they mean.

"This is the tip of the iceberg, but it is an exciting discovery," Van Eyk said.