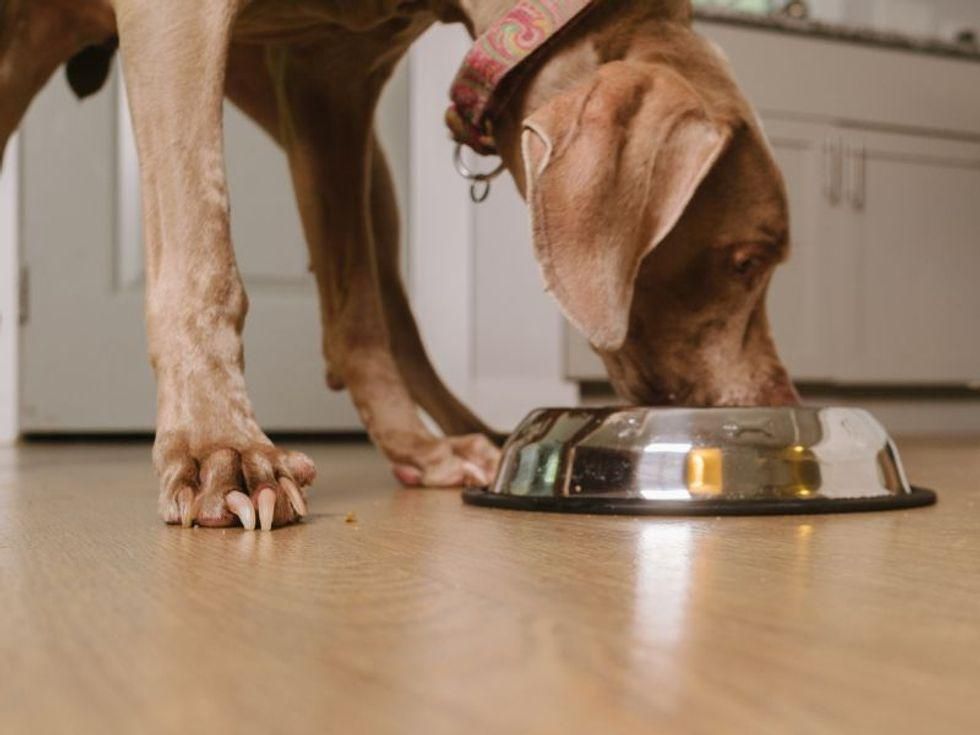 People who feed their dogs raw pet food may find more on the menu than they bargained for, with a new study finding it may be a source of antibiotic-resistant bacteria that could ultimately threaten humans.

The European analysis looked at 55 wet, frozen, dry, semi-wet and treat-version dog food samples sourced from 25 different brands. Some of the food was raw; some was not. Raw samples included duck, salmon, turkey, chicken, lamb, goose, beef and vegetable varieties.

Equally alarming, investigators said, is that nearly a quarter (23%) of the enterococci-contaminated samples also didn't respond to the antibiotic linezolid, a last-resort antibiotic that is only used for very severe infections that prove untreatable with any other antibiotic.

And this may not be a problem solely for dogs, said study author Ana Freitas. She's an investigator with UCIBIO (Research Unit on Applied Molecular Biosciences), an organization is hosted by REQUIMTE, a collaboration between the University of Porto and the NOVA University of Lisbon, both in Portugal.

"Antibiotic-resistant bacteria threaten our lives because human infections, from common ones to more severe ones, are harder to treat, if treatable at all," Freitas explained.

In fact, an additional genetic analysis revealed that the resistant bacteria identified in raw dog food samples was virtually identical to resistant bacteria found in hospital patients across the United Kingdom, Germany and the Netherlands.

That does not, however, mean that raw dog food inevitably puts human life at risk, said Freitas, but it's not good news either.

"The scenario is complex," she acknowledged, noting there no proof yet that resistant bacteria found in raw dog food has actually infected people.

"There has not been a record of a case actually showing transmission of these strains from dog food to their owners," Freitas stressed, adding that "even if it happens, healthy owners would not have a problem."

'An additional source of superbugs'

But while such dog food-to-person transmission might be difficult to prove, she noted that her team's findings suggest that it must now be considered a possibility.

"The problem," said Freitas, "is that we identified an additional source of superbugs that can be spread by different routes to humans. And if by chance the person is not healthy, this may be a problem."

The analysis was conducted in Portugal between 2019 and 2020. While the study focused on dog food brands currently available in Europe, the researchers noted that some are also marketed internationally.

Freitas said she cannot speak to the popularity or availability of raw dog food in the United States. However she noted that the U.S. Centers for Disease Control and Prevention plainly states on its website that it generally "does not recommend feeding raw diets to pet[s]," as the bacteria found in such raw food has the potential to make not only pets sick but also their owners.

"Your family also can get sick by handling the raw food or by taking care of your pet," the CDC stresses. People who still choose to bring raw pet food into the home are advised to wash their hands with soap and water when handling such food, and to "clean and disinfect all surfaces that the raw food touched, like countertops, microwaves, refrigerators and objects like knives, forks, and bowls."

Freitas and her colleagues will report their findings this week at a virtual meeting of the European Congress of Clinical Microbiology and Infectious Diseases (ECCMID). Such research is considered preliminary until published in a peer-reviewed journal.

Freitas' study was not the only research presented at the meeting on the relationship between dogs, their owners and antibiotic-resistant bacteria.

A gene that confers resistance to a last-resort antibiotic can be passed from dogs to their owners, another group of Portuguese researchers reported.

The mcr-1 gene -- first reported in China in 2015 -- provides resistance to colistin, an antibiotic of last resort. There are fears the gene could combine with drug-resistant bacteria to spawn an untreatable type of infection.

To find out if household pets may be acting as a reservoir of the gene and helping it spread, the researchers analyzed fecal samples from 126 healthy people living with 102 cats and dogs in 80 households in Lisbon. They found the gene in four people and two pet dogs. In two cases, both the dog and its owner had the gene. No cats were carrying the gene.

While transmission in both directions is possible, it is thought that in at least one case, the gene passed from the dog to its owner.

The findings raise concerns that pets can act as reservoirs for the gene and help spread resistance to last-line antibiotics, the researchers noted.

"Colistin is used when all other antibiotics have failed -- it is a crucial treatment of last resort. If bacteria resistant to all drugs acquire this resistance gene, they would become untreatable, and that's a scenario we must avoid at all costs," study author Juliana Menezes, from the University of Lisbon's Centre of Interdisciplinary Research in Animal Health, said in an ECCMID news release.

It's an issue that is definitely worth being concerned about, said Dr. Amesh Adalja, a senior scholar with the Johns Hopkins Center for Health Security in Baltimore.

"Antibiotic-resistant bacteria are one of the most pressing public health challenges that exists," said Adalja. "It threatens to take us to a pre-penicillin world.

"This finding is not surprising," he said. "We can find similar resistant bacteria in raw human food as well, and [it] reflects the use of antibiotics in agriculture."

On that latter point, Freitas concurred, noting that "genetically identical [antibiotic-resistant] bacteria have also been found in farm animals and wastewater across the UK."

That does not mean that raw pet food must be banned altogether, she said, "but it should be better controlled" via a periodic inspection regimen that screens for antibiotic resistance. Meanwhile, Freitas echoed the CDC's advice, adding that "dog owners can always cook this food to guarantee its quality."

There's more on risks of raw dog food at the U.S. Centers for Disease Control and Prevention.