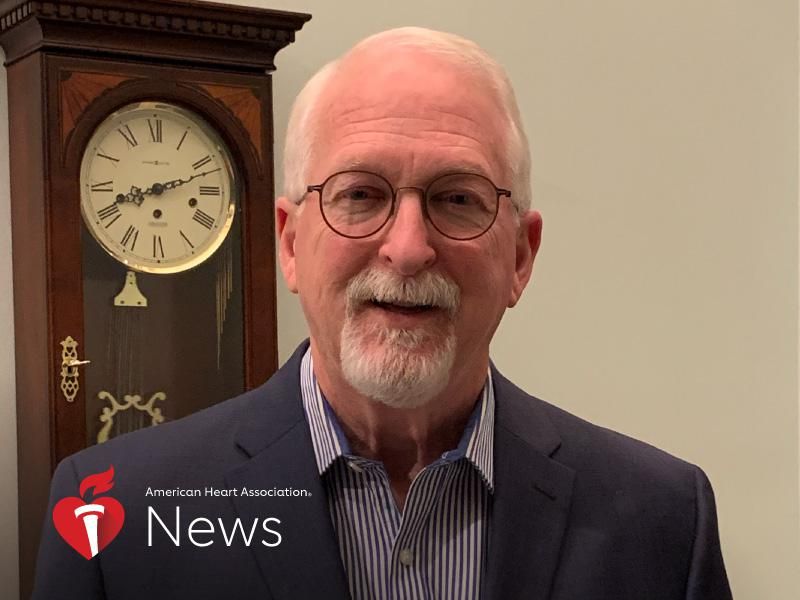 Even so, when he was diagnosed with high blood pressure in February, he blamed it on the 18 pounds he'd gained over the past year.

His cholesterol was normal and he'd passed a stress test a few years earlier, so he was optimistic that if he controlled his waistline, he'd control his blood pressure, too.

Watlington immediately improved his diet. Within three weeks, he dropped 10 pounds. He was feeling good about his progress. However, trouble already was lurking.

The part-time obstetric hospitalist from Jackson, Tennessee, was trying to rest during a 24-hour shift when he felt "a band of pain that stretched from the left part of my chest to the right."

It bothered him enough that he couldn't sleep. So he got up. After about an hour, the pain went away.

Two days later, it happened again, and again went away after an hour. A few days after that, the same pain awakened him at 4 a.m.

"They always talk about that feeling of an elephant sitting on your chest, but I never had that," he said. "It was discomfort, but it wasn't excruciating or anything."

This time, the pain didn't go away as it had each of the previous episodes. He began worrying that it could be his heart. Watlington, who is also a medical director for Humana, mentioned his symptoms during a virtual meeting. His physician colleague encouraged him to go to the hospital.

"This isn't good, is it?" Watlington said to an emergency room doctor he knew.

A STEMI – or ST-elevation myocardial infarction – is a type of heart attack in which one of the heart's major arteries is blocked. He called his wife, Tricia, who – like her husband – thought the problem was minor enough that she'd dropped him at the ER while taking her father to a doctor's appointment.

David immediately underwent a cardiac catherization procedure. Doctors inserted a stent to reopen his left anterior descending artery, which had been completely blocked. The procedure was over within an hour of his arrival at the hospital.

When David was diagnosed with high blood pressure, Tricia – a former dietitian – shifted him to the Dietary Approaches to Stop Hypertension, or DASH, diet. Since the heart attack, he's shifted to a mostly plant-based diet.

The diet changes are trickling down to the couple's blended family of eight children, ages 3 to 32.

"Even my 14-year-old son is carrying cauliflower rice to school for his lunch now," Tricia said.

David has started working fewer hours to reduce his stress. He's begun walking each day as part of a cardiac rehab program. He's lost another 24 pounds and remains committed to maintaining a healthier lifestyle.

"When you have a heart attack, it's just a whole game-changer," he said. "I can't just lose some weight and forget about it."

Even after a career in medicine, David considers his experience "a wake-up call."

"I've seen too many people where they have one cardiac event and then have another," he said. "I don't want to be in the cath lab again."