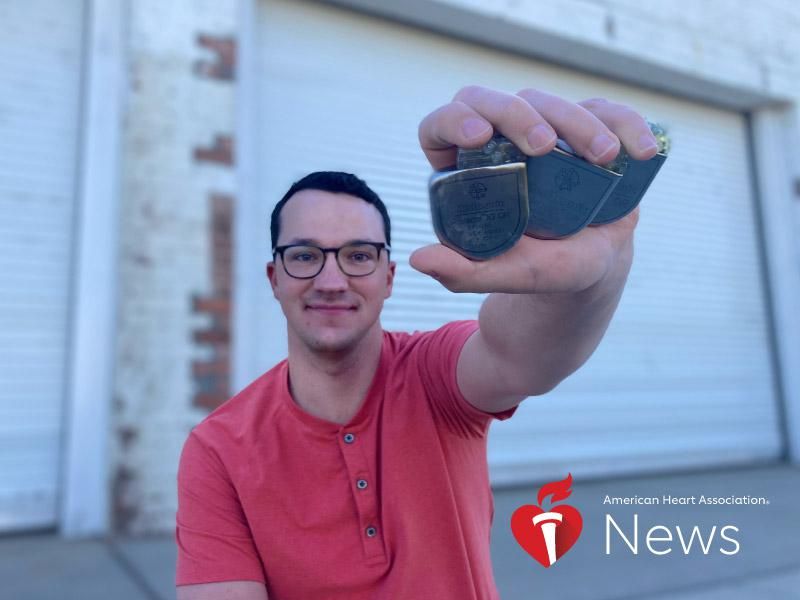 Running late after a hectic day, Jimmy Fremgen sprinted up a flight of stairs to his apartment. His hands shook so wildly he had trouble fitting the key into the lock.

Once inside, his heart pounded so rapidly he couldn't count the beats. And as someone born with a heart problem – and with a device in his chest that was supposed to regulate those heartbeats – he certainly tried counting.

Afraid he would pass out, Jimmy jumped off the sofa and opened the front door. That's when the device went off.

Jimmy remembers crying for help as he lay on the ground, pleading with his neighbors to keep him awake until the ambulance arrived. Data from his device showed his heart had been beating 233 times per minute. A resting heart rate is normally 60 to 100 beats per minute.

Although this was the first time Jimmy's device went off, he'd spent much of his life bracing for it.

Jimmy was in his early 20s and already on his second implantable cardioverter defibrillator, or ICD. He needed it because he was born with a condition called hypertrophic cardiomyopathy. It's a form of heart failure, marked by the heart having trouble pumping blood to the rest of the body. Hypertrophic cardiomyopathy, or HCM, is most often an inherited condition – something Jimmy knows all too well.

His mom's dad survived several cardiac arrests before dying from heart failure at 58. Jimmy was almost 2 at the time yet remembers sitting in his grandfather's lap and blowing out the match to his pipe. It's Jimmy's first memory.

His mom had it, too. The family lived in such fear of her going into cardiac arrest that as the eldest of three kids, Jimmy learned CPR in fifth grade. She would die of heart failure at 45; Jimmy was 19.

"We had a bond that was forged not just through being mother and son but because we spoke the same language about the same kind of experience that we were having with our bodies," he said.

It forced Jimmy to grow up fast. He went to college fully aware that "I'm probably not going to live the full extended lifetime that most Americans expect to live. It would be impossible for something like that to not weigh on you," he said.

In 2011, he moved to Washington, D.C. Arriving midyear and unable to find a teaching job, he became a legislative intern for U.S. Rep. Doris O. Matsui (D-Sacramento). He then served as senior policy advisor to Rep. Elijah E. Cummings (D-Baltimore).

In 2016, Jimmy returned to California. He worked for two years as a senior aide to the state legislature, then launched a boutique political consulting firm in Sacramento.

Like any proud dad, Jim Fremgen marvels at what his son has accomplished. But he also understands the added challenges. "His condition doesn't hold him back from doing things that give him joy."

Yet Jimmy, who recently turned 33, doesn't gloss over how tough it can be. He attributes his and his mom's chronic anxiety to their heart condition. When he was young, every time the phone rang, he feared it was bad news about her. And when he feels his heart flutter in an unusual way, he worries his device is about to shock him.

"These aren't things on the forefront of your mind, but when they pop up, they become very real and tangible," he said. "I think too often the temptation is to be quiet about things we struggle with, and that leads to a lot of circumstances where people don't get the help they need."

Jimmy has seen a therapist to talk through these feelings. He also practices mindfulness and does breathing exercises.

At 20, he decided to honor his mom's memory by volunteering with the American Heart Association and spoke at Go Red for Women events. His family also sponsors the Kathleen L. Fremgen Memorial Nursing Scholarship – named in his mother's honor – to support students returning to college after becoming a mother, as she did.

He also raises awareness through his social media accounts, with an eye toward political solutions. He's especially interested in the plight of the millions of children who live with a chronically ill parent, like he did.

"I don't think we do enough to support the families that are struggling with the reality of heart disease," he said. "We can save lives by changing health policy to make health care more accessible, especially to low-income and minority communities who might not realize they have significant risk factors. We ought to do better, and the only way to do better is by engaging."