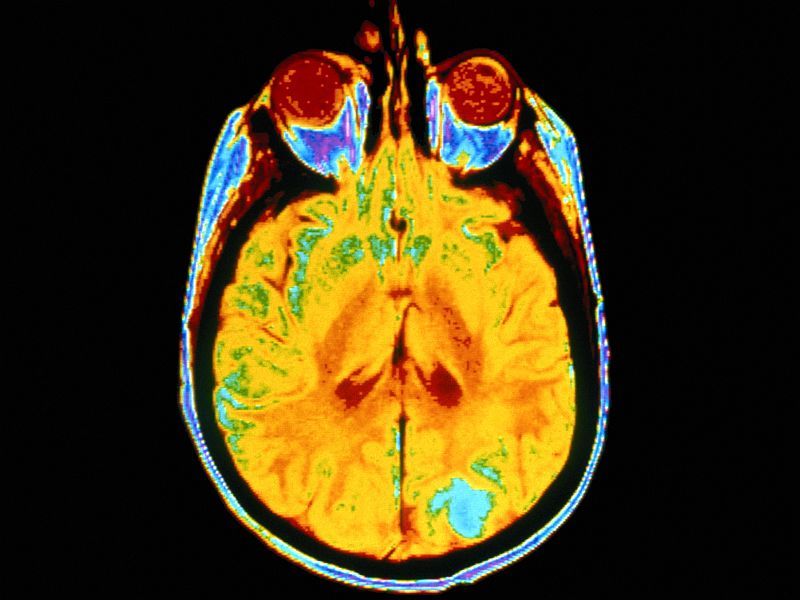 A microchip implanted in the brain has allowed a paralyzed man to communicate by text — at speeds that approach the typical smartphone user.

The achievement is the latest advance in "brain-computer interface" (BCI) systems.

Scientists have been studying BCI technology for years, with the aim of one day giving people with paralysis or limb amputations greater independence in their daily lives.

It basically works like this: Tiny chips are implanted in movement-related areas of the brain, where they tap into electrical activity in cells. When a person imagines executing a movement, the relevant brain cells start firing. Those electrical signals are then transmitted by wires to a computer, where they are "decoded" by sophisticated algorithms and translated into action, allowing people to control assistive devices with their own mind power.

Researchers at a few universities have used BCI to enable small numbers of patients to mentally control robotic limbs or move computer cursors to "type" text.

In the new study, researchers at Stanford University managed to speed up that latter skill in one man with full-body paralysis. Instead of having him mentally move a computer cursor, the researchers asked him to imagine handwriting.

The approach allowed him to eventually churn out text at a rate of roughly 18 words per minute, or double what he'd achieved with the mental-typing tactic.

The man's revved-up performance is nearly on par with the typical smartphone user, the researchers said.

Henderson stressed, however, that the technology is confined to the research lab for now. It still requires equipment, wires and technical expertise that are not realistic for home use.

Krishna Shenoy, a professor of electrical engineering at Stanford and the other senior author on the study, said, "We can't predict when there will be devices that can be used clinically."

Those cautions made, both researchers said the findings represent progress in the field.

The study participant — referred to as T5 — lost nearly all movement below the neck after suffering a spinal cord injury in 2007. Nearly a decade later, Henderson implanted two microchips in the man's motor cortex, an area in the brain's outermost layer that governs voluntary movement.

Each chip is the size of a baby aspirin and contains electrodes that pick up signals from neurons involved in moving the hand.

In a 2017 study, T5 and two other people with paralysis learned to mentally move a cursor around a keyboard displayed on a computer screen, simulating typing. T5 was ultimately able to tap out 40 characters — or about eight words — a minute.

This time, the researchers tested a new approach, where the computer algorithms decoded mental handwriting.

First, T5 pictured himself writing individual letters, using a pen on a yellow legal pad. ("He was very specific about that," Henderson noted.) Through repetition, the computer software "learned" to recognize the brain signals associated with T5's effort to write a given letter.

He then graduated to mentally writing sentences, and over time, the algorithms got better at reading his neural firing patterns, until he was able to crank out 90 characters, or 18 words, per minute.

It turns out that visualizing handwriting — with its curves and speed changes — provides a "rich signal" that's easier to decode than the straight-line movement of a cursor, Shenoy explained.

Jennifer Collinger is an associate professor at the University of Pittsburgh who is developing BCI technology.

She called the new findings an important scientific advancement, but cautioned that much work remains before BCI moves into the real world.

"These systems will need to be wireless, reliable and work when you need them," Collinger said.

The hardware itself, she added, will have to last for many years.

Collinger could see how different BCI systems under development might come together: A mind-controlled robotic limb could have many daily uses — but, Collinger said, it might not be a great tool for texting.

The research, reported May 12 in the journal Nature, was funded by government and private grants. Stanford University has applied for a patent on intellectual property associated with the work.

The Christopher and Dana Reeve Foundation has more on living with paralysis.