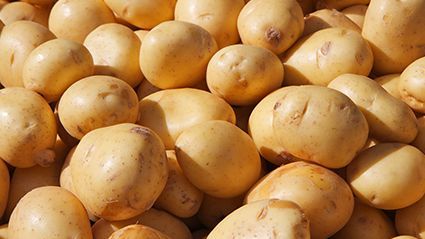 Not only have humans and their ancient ancestors been eating carbs for longer than was realized, but a new study finds these starchy foods may actually have played a part in the growth of the human brain.

A new study researching the history of the human oral microbiome found that Neanderthals and ancient humans adapted to eating starchy foods as far back as 100,000 years ago, which is much earlier than previously thought.

"We think we're seeing evidence of a really ancient behavior that might have been part encephalization -- or the growth of the human brain," said researcher Christina Warinner, from Harvard University. "It's evidence of a new food source that early humans were able to tap into in the form of roots, starchy vegetables and seeds."

The oral microbiome is a community of microorganisms in the mouth. They help protect against disease and promote health.

The findings are part of a seven-year study that involved the collaboration of more than 50 international scientists.

Scientists analyzed the fossilized dental plaque of modern humans and Neanderthals, then compared them to chimpanzees and gorillas, man's closest primate relatives, and howler monkeys, a more distant relative.

Billions of DNA fragments preserved in the fossilized plaque were genetically analyzed to reconstruct their genomes.

The researchers were surprised to find strains of oral bacteria that are specially adapted to break down starch. These bacteria, from the genus Streptococcus, have a unique ability to capture starch-digesting enzymes from human saliva and feed themselves. The genetic machinery they use to do this is only active when starch is part of the regular diet.

The Neanderthals and the ancient humans had these starch-adapted strains in their dental plaque, but most of the primates had almost none.

"It seems to be a very human specific evolutionary trait that our Streptococcus acquired the ability to do this," Warinner said in a Harvard news release.

The findings were published May 10 in the Proceedings of the National Academy of Sciences.

Researchers said the finding makes sense because for hunter-gatherer societies around the world, starch-rich foods such as underground roots, tubers like potatoes and nuts and seeds were important and reliable nutrition sources.

The human brain requires glucose as a nutrient source and meat alone is not sufficient, Warinner said. Starch makes up about 60% of calories for humans worldwide.

"Its availability is much more predictable across the annual season for tropical hunter-gatherers," said study co-author Richard Wrangham, the Ruth B. Moore professor of biological anthropology at Harvard. "These new data make every sense to me, reinforcing the newer view about Neanderthals that their diets were more sapien-like than once thought, [meaning] starch-rich and cooked."

The research also identified 10 groups of bacteria that have been part of the human and primate oral microbiome for more than 40 million years and are still shared today. Relatively little is known about them.

The oral microbiome of Neanderthals and today's humans were almost indistinguishable. The study touches on the power of analyzing the tiny microbes that live in the human body.

"It shows that our microbiome encodes valuable information about our own evolution that sometimes gives us hints at things that otherwise leave no traces at all," Warinner said.

Smithsonian National Museum of Natural History has more on ancient tools and food.