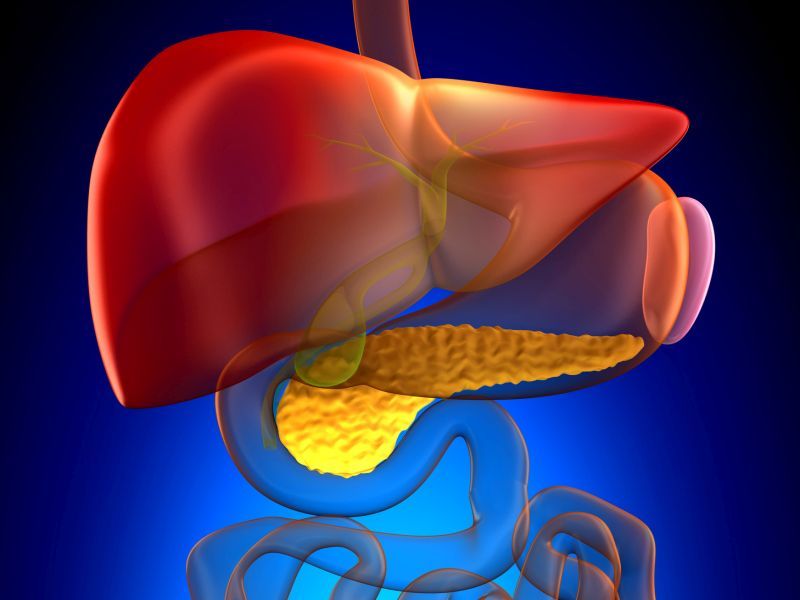 There may be new hope for patients with a subset of pancreatic cancers tied to certain genetic mutations, a new study finds.

The study involving 42 patients found that a "PARP inhibitor" drug called rucaparib (Rubraca), may replace chemotherapy in the up to 8% of pancreatic cancer patients whose tumors are marked by BRCA1, BRCA2 and PALB2 genetic mutations.

Two-thirds of pancreatic cancer patients with these tumor mutations experienced a halt in the growth of their cancer, or even tumor shrinkage, after switching from chemotherapy to rucaparib as a maintenance therapy, researchers found. The study was partly funded by Clovis Oncology, which makes rucaparib.

Rucaparib is a targeted therapy given as a pill. It's currently approved by the U.S. Food and Drug Administration as a maintenance therapy for patients with recurrent ovarian and fallopian tube cancer and prostate cancer, but not yet for pancreatic cancer. Maintenance therapy refers to ongoing therapies after initial, first-line cancer treatment has been received.

"This is another step forward for PARP inhibitors and for the treatment of tough-to-treat pancreas tumors," said study author Dr. Kim Reiss, an assistant professor of hematology-oncology at University of Pennsylvania's Perelman School of Medicine.

"It's a safe option that not only has the potential to maintain responses, but also shrink pancreatic tumors and, in some cases, achieve complete responses for those carrying these mutations," Reiss added in a university news release.

Arnold Simon, age 71, was one of the patients in the trial. He was diagnosed with metastatic pancreatic cancer in 2016 and discovered he had the BRCA2 mutation. Simon has taken rucaparib for more than three years and since then, all of his last 16 CT scans have been clear, with no signs of cancer.

"The biggest benefit of being on the PARP inhibitor is that it is pills only, and the side effects have been minimal," Simon said in the release. "I don't have to go down and sit and have chemo dripped for six hours into me. As far as I'm concerned, for me, there's nothing better than what I'm currently on."

Lydia Henson, 56, was diagnosed with metastatic pancreatic cancer in 2014 and treated with chemotherapy for years before discovering she had the PALB2 mutation. She has been on the PARP inhibitor for 18 months, with no signs of active cancer.

But not all patients will have such positive responses: Of the 42 patients with advanced pancreatic cancer in the new trial, 12 had a partial response and three had a complete response. The results were published online May 10 in the Journal of Clinical Oncology.

In all, two-thirds (66.7%) of the patients had a complete response, partial response or stable disease over a median of 17 months.

Survival with no progression of the cancer lasted a median of 13 months, while overall survival was 23.5 months.

At the end of the trial, eight patients were alive and in active follow-up more than two years after starting rucaparib, four of whom are progression-free.

Rucaparib may also benefit patients with other tumor types, including acinar and squamous cell carcinoma of the pancreas, the researchers said. That could expand the population for which these drugs might be used, they believe.

Of course, because the drug is targeted to certain DNA mutations, genetic screening is key.

The findings "underscore the importance of genetic counseling and testing, which can potentially steer the treatment course in a better direction," study senior author Dr. Susan Domchek said in the release. She is executive director of the Basser Center for BRCA at Penn.

Dr. Wasif Said is deputy physician-in-chief and medical director at Northwell Health Cancer Institute in Lake Success, N.Y. He wasn't involved in the new trial, but said the rucaparib results echo those of another approved PARP inhibitor drug, olaparib (Lynparza), in terms of effectiveness against pancreatic cancer.

Said stressed that "the patient population eligible for olaparib or rucaparib maintenance therapy is small," because it's targeted to a narrow subset of tumors. But because pancreatic tumors can be so lethal, "such agents are certainly a welcome addition to the treatment armamentarium," he explained.

The study "underlines the significance of the role of PARP inhibitors in the management of advanced pancreatic cancer and complements the very important patient-related outcomes -- including quality of life, convenience of oral administration, less visits to the cancer center and possibly an advantage in [cost] as well," according to Said.

For more on pancreatic cancer, see the American Cancer Society.