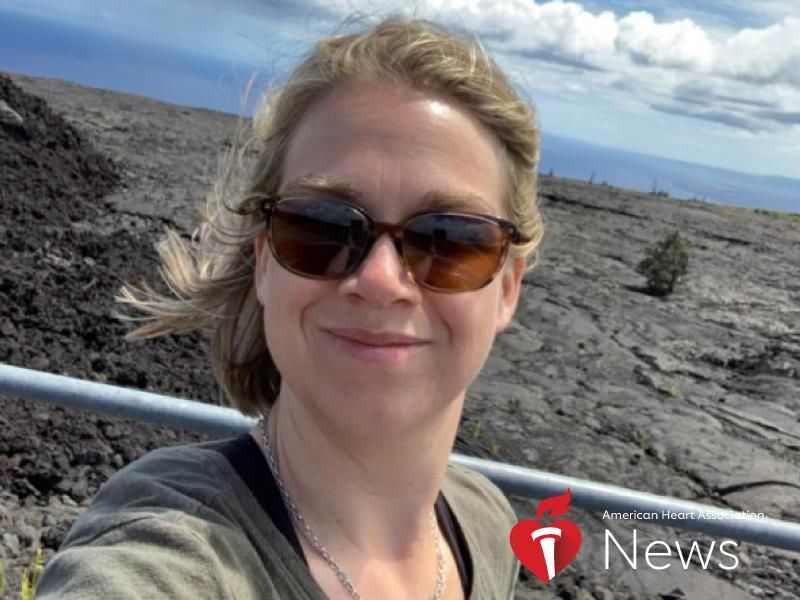 Walking briskly up a steep hill to pick up her daughter from school, Katrien Limón felt a pain in her chest.

"Like I had the worst acid reflux of my life," she said.

Katrien, who lives in Montrose, California, had been treated for acid reflux before. So on that afternoon in June 2018, she took medication and drank water. The pain, however, only seemed to go away when she stopped or walked at an easy pace.

Finding no relief after two weeks, Katrien went to urgent care. She received stronger medication. It didn't help, so she followed up with her doctor a week later. The doctor thought it might be reflux-related and referred Katrien to a gastroenterologist. Tests for possible gallbladder disease and other stomach issues found no answers.

Katrien returned to her primary doctor, who suggested it could be anxiety and prescribed anxiety medication. Although her daughter Ava – then 7 – has autism and requires constant attention, Katrien wasn't convinced anxiety was causing her pain, which was now traveling into her throat and sometimes her jaw.

"It was almost like a bad toothache at times," she said.

Katrien's husband, John Limón, said his wife always seemed exhausted. She'd run out of breath during regular walks or trips to the park with their kids.

"Things would be half done around the house, like she just got too tired," he said.

While shopping with her family, Katrien experienced tunnel vision and felt "like the energy was sucked out of me." Her smartwatch showed her heart rate was 130 beats per minute, even though she was walking slowly. She went to the ER, but again testing failed to offer clues.

Katrien tried to widen her perspective on what could be the root of the problem. Could it be her heart?

As a teenager, she saw her father struggle with cardiovascular disease. When she was 13, he had the first of several strokes, a consequence of an arrhythmia he'd been diagnosed with in college and hadn't managed very well. Over the next 15 years, he was treated for heart valve disease, a heart attack and additional strokes before dying.

So, she definitely had a family history. Then again, only months earlier, testing during her annual physical showed normal cholesterol and blood pressure. Plus, she'd recently lost 30 pounds.

Still, none of the other specialists could find the source of her problem. Worse, she thought they didn't believe something was wrong with her. With nothing to lose, she saw a cardiologist.

A stress test showed Katrien had decreased blood flow. During a cardiac catherization procedure, doctors discovered a main coronary artery was 90% blocked and another was 95% blocked.

"I've never seen someone your age have what you have," the doctor said. Katrien was 37. He added that if she had suffered a heart attack, she may not have survived.

She was diagnosed with coronary artery disease, the most common type of heart disease, which is caused by plaque buildup in the walls of the arteries that supply blood to the heart and rest of the body. She needed a double bypass operation to reroute the blood flow around the compromised arteries.

She reached out to her family and learned that her mom struggled with high blood pressure. Among her seven siblings, she was the only one who didn't have high blood pressure or high cholesterol. She also learned one of her brothers had a heart attack at age 48.

John, whose grandfather and great-grandfather both had bypass surgery in their 70s, said Katrien's diagnosis made him realize heart issues aren't limited to older people.

"It wasn't something I ever thought we'd have to worry about at a young age, but genetics can really play a role," he said.

The surgery came a week after the diagnosis. She spent a week recovering in the hospital. A 12-week cardiac rehab program helped her build strength and confidence to return to physical activity. Emotional scars lingered, however. Katrien struggled with panic attacks for about a year.

Now 40, Katrien continues to see her cardiologist and take medications. She's shifted to a plant-based diet and practices yoga and meditation to help reduce anxiety and stress.

John pays closer attention to his health, too. Previously diagnosed with prediabetes, he's lost weight on the family's new diet and is better about following up with his doctors.

Katrien said her experience demonstrates the importance of being your own health advocate and following up when something doesn't seem right.

"You know your body better than any doctor," she said. "Sometimes you have to fight for your diagnosis. If I had been complacent, I may have had a heart attack and I think about that every day."