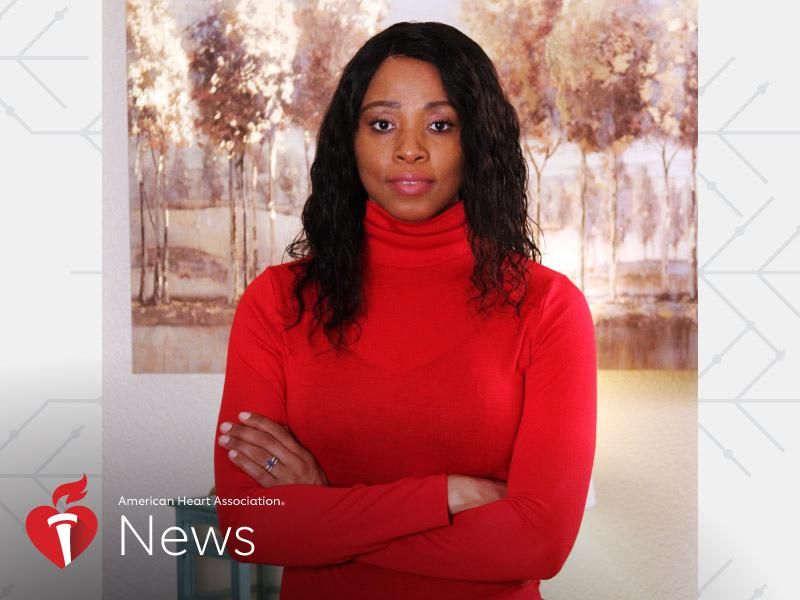 On a Saturday morning last August, Sindi Mafu had started her typical weekly chores – dusting, laundry, sweeping. Her 4-year-old daughter, Avela, was busy with her Zoom ballet class, and her toddler, Lunga, was eating his breakfast. Sindi grabbed her mop.

She started sweating – profusely. Too much for merely mopping. She checked to make sure the air conditioner was on (it was), began washing her face, then felt very dizzy. Her husband, Ndumiso, wanted to call 911. Sindi insisted on waiting.

When a crushing pain landed on Sindi's chest and pain radiated through her arm, Ndumiso called for help.

"In my mind, I thought it was something like a heart attack, but processing that didn't make sense," he said. "I just didn't understand how that could happen."

EMTs arrived within minutes. They asked Sindi questions and performed an electrocardiogram. The test didn't show anything surprising. Maybe it was a panic attack or stress.

Sindi repeatedly asked if her issue was heart-related. She was told that at 37 she was too young, didn't have risk factors and her EKG was normal. Paramedics said she could try breathing exercises, call her primary care doctor or go to the hospital.

"If they gave me the option to stay home, I figured it must not be anything serious," she said.

Fifteen minutes after they left, Sindi's chest pain worsened. Ndumiso loaded the kids into the car and rushed Sindi to the hospital. Because of COVID-19 protocols, she had to go into the emergency room alone.

The staff performed one EKG, then another. They transferred Sindi to a private room and started moving at a quickened pace, drawing blood, starting an IV. Sindi overheard the ER doctor on the phone with a cardiologist and learned she wouldn't be going home.

Sindi updated her husband by text, telling him she was being moved to the cardiac wing. That evening the cardiologist delivered the news Sindi had feared: "I can confirm that today you had a heart attack."

Because of Sindi's age and lack of risk factors, the doctor wanted to perform a cardiac catheterization procedure right away for an up-close view of how her heart was working and if she had any blocked arteries.

"At that moment, I think that's when I just lost my mind," said Sindi, who hadn't gotten to say goodbye to her husband and kids. "As they are taking me down, I'm saying, 'You've got to make sure I come back. My kids need me. They're so young.'"

When Sindi awoke following the procedure, the cardiologist told her she hadn't needed a stent or other intervention. She had survived a type of heart attack caused by spontaneous coronary artery dissection, a rare event in which a tear occurs in the artery wall. That wall has three layers; the tear allows blood to pass through the innermost layer but then becomes trapped and bulges inward. This can narrow or block the artery and cause a heart attack.

Sindi had a tear in the wall of her left descending artery and was told it should heal on its own, with help from medication. She has had several tests to try to figure out why this happened, but it remains a mystery.

Researchers aren't sure what causes SCAD, but patients are often women who are otherwise healthy, with few or no risk factors for heart disease. Some studies have pointed to a hormonal link, showing a greater incidence among postpartum women and women experiencing or close to a menstrual cycle.

The contract administrator from Sherman Oaks, California, still has an occasional pain in her chest, can't sleep well and is often exhausted. She wonders if she's suffering from PTSD from what she's been through.

"Not having concrete answers is worrying sometimes," she said. "It's not comforting to have all these questions hanging over my head and not have certainty."

Sindi has found some support. When she got out of the hospital, she started researching SCAD and came across the American Heart Association's website, where she reached out for more information. Among other things, she was told about a Facebook group for SCAD survivors.

"It's good because you are able to talk to other survivors, and I'm able to see that, oh I'm not going crazy. I'm not the only one experiencing these symptoms and these emotions," Sindi said. "It's also encouraging for people to say, 'Oh today, I'm celebrating my fifth SCAD anniversary.' Then I know, oh OK, you can get better and go on to live a healthy life."