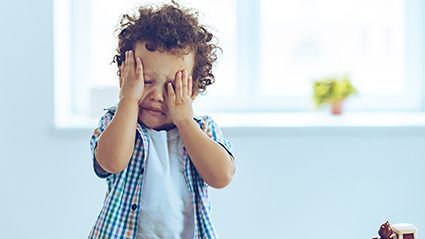 Preschoolers who spend a lot of time watching movies and shows on TVs and other screens are more likely to develop emotional and behavioral problems by age 5, a Finnish study warns.

But despite their reputation, video games did not appear to promote any emotional problems in youngsters, researchers concluded.

"We found that high levels of screen time at the age of 1.5 years is related to peer problems at 5 years, and that high levels of screen time is related to more psychosocial problems at 5 years, including emotional and behavioral symptoms as well as attention difficulties and hyperactivity," said senior researcher Dr. Juulia Paavonen, deputy chief physician for child psychiatry at Helsinki University Central Hospital. "This was mainly related to program viewing rather than playing games."

The findings are troubling because preschoolers' use of mobile phones and tablets tripled between 2013 and 2017, with many 4-year-olds now playing games, using apps or watching videos on these devices every day, researchers said in background notes.

For their study, Paavonen and colleagues examined data on nearly 700 children participating in a long-term pediatric health study in Finland.

The data showed that 23% of 18-month-olds and 95% of 5-year-olds in Finland spend more than an hour each day on an electronic device, in excess of World Health Organization screen time guidelines.

By 18 months of age, toddlers were spending an average 32 minutes per day on devices. This increased to 114 minutes a day -- nearly two hours -- by age 5.

Paavonen said the kids who racked up the most screen time were more likely to have:

However, this only held for time spent passively watching shows. These effects were not associated with time spent on video games, after controlling for other factors.

There are several potential explanations for these effects, Paavonen said.

"Screen time may replace significant other activities, like socializing with peers and family members, which can be problematic because children learn social skills by practice in everyday life," she said. "Screen time, particularly in the evening, can replace sleep time, and it is in other studies related to delayed bedtimes and sleep onset problems and thus lack of sleep, which in turn is related to worse emotional regulation."

Video games might not produce the same effects as watching shows because they are more interactive, said Dr. Jaeah Chung, an assistant professor of pediatrics at Icahn School of Medicine at Mount Sinai in New York City, who reviewed the findings.

"Some of the games are based on physical activity, like Wii, and others are more based on problem-solving or more interactive," she said.

Chung suggests that parents screen all content for their kids, and watch along with them to make the experience more thoughtful and less passive.

"Depending on the age, they may not understand what's going on in the media, so it's good to ask questions like what do you think is going on, or how do you think that character felt," she said.

Parents also should limit media use in the house, setting aside mealtimes as screen-free and requiring that kids only use devices in a common area like the living room so they can monitor what's being viewed, Chung added.

The findings were published March 17 in the journal BMJ Open.

The American Academy of Pediatrics has more about recommended screen time for families.