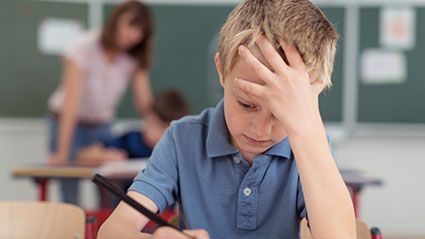 As if attention-deficit/hyperactivity disorder (ADHD) isn't already tough on a child, new research suggests the condition might also raise the odds for a psychotic disorder later in life.

But parents should not panic.

"I would say that this finding should not be an alarm for parents and people who have ADHD, because the absolute risk for psychotic disorders remains low," said psychiatry professor Dr. Gabrielle Shapiro. She is chair of the American Psychiatric Association's Council on Children, Adolescents and Their Families.

That point was echoed by Dr. Victor Fornari, vice chair of child and adolescent psychiatry with Zucker Hillside Hospital in Glen Oaks, N.Y. "What's clear is that the vast majority of youth with ADHD do not go on to develop psychosis," he said.

The new analysis looked at 12 prior studies that included a total of more than 1.8 million participants, of whom just over 124,000 had been diagnosed with ADHD before the age of 18. Roughly 1% to 12.5% of those patients went on to develop a psychotic disorder.

But no more than 4% of those without ADHD met the same fate, with some of the studies citing essentially zero risk. Collectively that translated into a five-times higher psychotic disorder risk among those with a history of ADHD, regardless of gender.

So how much concern should this raise? Both Shapiro and Fornari, who were not involved in the review, suggested that the findings need to be kept in context. They said the far more pressing issue is making sure that children with ADHD get the care they need in the first place.

"Parents should know that they should seek early treatment for their child with ADHD," Fornari said, "because children who are treated do much better than children who are not treated. And getting them in treatment is the best way to prevent the development of more serious problems."

And, Shapiro added, that means "making sure that we do everything we can to destigmatize mental illness so that parents don't hesitate to seek out care for their children with ADHD."

The new review, led by Dr. Mikaïl Nourredine, of the Service Hospital and University of Pharmacotoxicology of Lyon, France, was published online recently in JAMA Psychiatry.

When looking at a potential connection between ADHD and psychotic disorder risk, Nourredine and colleagues included a wide array of diagnoses, including schizophrenia and delusional disorder. Mood disorders that can give rise to psychotic symptoms -- such as depression or bipolar disorder -- were not included.

In the end, both Shapiro and Fornari noted that what the research team found was an association between ADHD and elevated risk for future mental illness, rather than definitive proof of a direct cause and effect.

Still, the French investigators offered a number of theories that could explain the link. For example, they suggested that both ADHD and psychotic disorders may source back to similar genetic predispositions. It could also be that they share the same environmental triggers, or that they unfold along similar developmental pathways.

According to Shapiro, "The message of this study is that, as scientists, we must continue to look for correlations to prevent long-term mental illness among our ADHD patients, because the propensity for a child with ADHD to have some sort of other psychiatric diagnosis in the future is definitely real. We know, for example, that kids with ADHD who go untreated have higher instances of depression, anxiety and substance use."

Fornari said that means that "children being treated for ADHD should certainly be monitored for other mental health symptoms. That kind of tracking should already be part of the treatment plan."

The best treatment plans, Shapiro said, "look at the entire holistic person. Because that's the way to try and prevent co-morbid diagnoses down the road. And the good news is that I do see that kids with ADHD who are treated properly do have a lower incidence for additional disorders in the future."

There's more about ADHD at the U.S. Centers for Disease Control and Prevention.