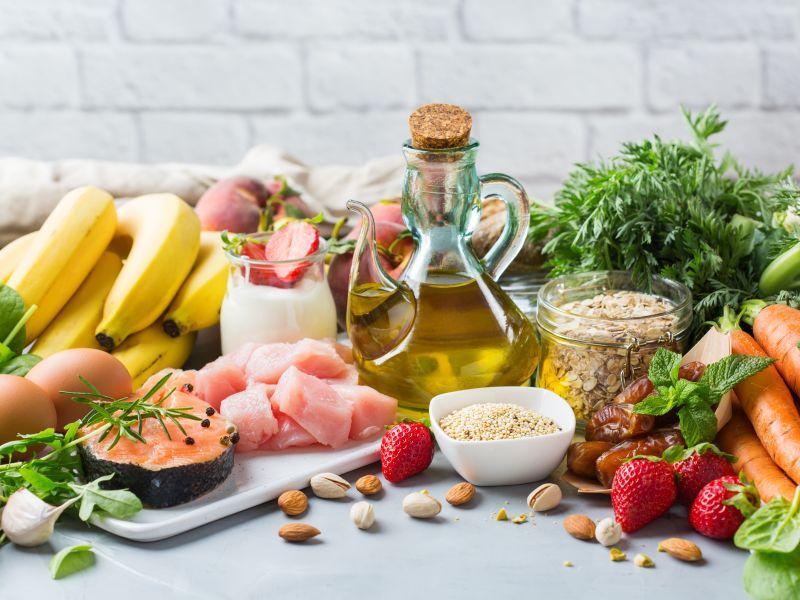 Helping your brain stay sharp with age may be as simple as changing up the food on your plate at dinnertime, a new study suggests.

The study focused on the healthy "Mediterranean" diet, a regimen reliant on olive oil, beans, nuts, fruits, vegetables and whole grains, with chicken and fish largely replacing red meat. Dairy products and eggs are only used in "low to moderate amounts," according to the American Heart Association.

Nutritionists have long touted the benefits of the diet on various facets of health, including cardiovascular health. But a team of researchers in Scotland, led by Janie Corley, wanted to see whether Mediterranean fare might help the brain work better with age, too.

To do so, her team tested the mental ("cognitive") ability of over 500 people averaging 79 years of age, none of whom showed any signs of dementia. The tests focused on problem solving, thinking speed, memory and word knowledge, and the researchers also obtained MRI brain scans of over 350 of the participants.

"Including both cognitive ability and brain MRI markers in the one study is important, because it has the potential to further our understanding of the relationship between what we eat and cognitive aging," explained Corley, who is a postdoctoral researcher in psychology at the University of Edinburgh.

Participants were also asked to fill out questionnaires on what their typical diets were over the past year.

In their initial test, people who adhered more closely to the Mediterranean diet tended to score better, the study found. While the study couldn't prove cause and effect, the diet was positively associated with improved performance in specific brain functions, such as memory, verbal ability and visuospatial ability (people's ability to analyze and mentally alter objects).

Even after adjusting for childhood IQ and other health and education factors, the results still showed a significant benefit to the brain for folks adhering to a Mediterranean diet compared to those who didn't.

The strongest association seen was between the diet and verbal ability. However, the Mediterranean diet had no effects on the brain's structure as shown on the MRIs.

In other words, the brain appeared to function differently depending on diet, but it did not look different. So what might be going on?

According to Lona Sandon, a registered dietician nutritionist and professor of nutrition at the University of Texas Southwestern in Dallas, "We could hypothesize that it has something to do with inflammation for one, as well as with other nutrients like magnesium or folate that are found in the leafy greens."

Sandon also acknowledged the important role healthy fats, such as monounsaturated and polyunsaturated fats, appear to play in keeping the brain and body functioning at their best. These healthy fats, which are found in high amounts in the Mediterranean diet, help reduce inflammation in the body.

Also at play may be various antioxidants, also found in abundance in the Mediterranean diet.

On the other hand, less healthy diets -- dominated by processed foods -- could have the opposite effect, the Scottish researchers warned. That's because these types of diets tend to be high in red meat, potatoes, and sugary and fried foods.

Of these, Sandon noted, red meat appears to be particularly unhealthy for the brain, probably because of red meat's high level of saturated fat. She added that processed foods are also packed with excessive salt, sugar and other components that can make them both cheap and addictive.

But if you've eaten an unhealthy diet most of your life, is it too late to change to a Mediterranean (or any other healthy) diet in your 60s or even 70s? Could the brain still benefit?

The answer is that it's never too late, the experts said.

"Cognitive decline is a risk factor for dementia, for which there is currently no cure," Corley said. "Therefore, strategies to prevent or delay cognitive decline, by changes in modifiable lifestyle factors such as diet, are important in terms of public health."

Sandon added that the typical Mediterranean-diet meal can be both healthy and delicious.

"Some salmon filet that has been grilled might be on the plate. Maybe some broccoli and brussels sprouts and tomatoes that are roasted or pan-seared. Maybe some brown rice or quinoa, and there might be olive oil on the vegetables," she said.

The study was published recently in the journal Experimental Gerontology.

There's more on the health benefits of the Mediterranean diet at the American Heart Association.