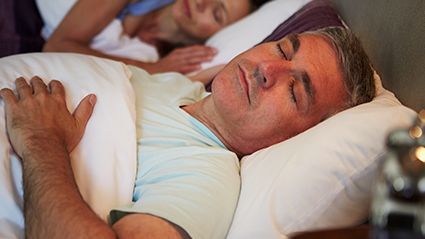 If you've ever had a "lucid dream" -- one in which you're aware you're dreaming -- new research just might jolt you awake.

Not only is it possible during these vivid dreams to perceive questions, but to answer them, too -- at least sometimes.

That's the tantalizing takeaway from four independent studies that used different methods to communicate with sleeping volunteers, including some who were experienced in the art of lucid dreaming.

"When we started the project, we predicted that two-way communication would be possible because there have been all these previous studies of lucid dreamers using eye signals to communicate out of dreams," said study lead author Karen Konkoly, a doctoral student at Northwestern University in Evanston, Ill., who noted that there's also literature on things from the real world being incorporated into dreams.

But depending on someone to recount his or her dreams is notoriously inaccurate. So researchers in the United States, France, Germany and the Netherlands devised separate experiments to see whether they could communicate with slumbering volunteers and get a response back.

As Konkoly and others predicted, the answer is yes -- at least sometimes.

In one experiment, a researcher asked the sleeping volunteer, "What's eight minus six?" Without missing a beat, the volunteer responded with two left-right eye movements, indicating the answer is two.

Slumbering volunteers could also respond by contracting muscles in their faces.

"We worried that one reason the experiment wouldn't work is because we would present somebody with a math problem, like five minus two, and they would hear 'slime climbs on you,' " Konkoly said. "We were worried that it wouldn't get in, it would be really distorted too much for them to actually answer it."

That wasn't a problem at all.

Many volunteers were able to hear what was said transposed over their dream or they could hear it even though the dream was going on, she said.

"There's a cool example from the French team where it seemed like God was speaking to them or like a narrator in a movie," Konkoly said. "And then, the German team, they just used tones and lights and Morse code. And, so, they had more interesting incorporation. The lights in the room were flashing, a fishbowl was flashing. The clouds were flashing. But when we just asked people math problems, the incorporation seemed to be pretty direct."

Besides Northwestern, researchers were from Sorbonne University in France, Osnabruck University in Germany and Radboud University Medical Center in the Netherlands. They worked with 36 volunteers. Some were experienced lucid dreamers; some were not.

The studies revealed that dreaming volunteers could do simple math, follow instructions, answer yes-or-no questions and tell the difference between different sensory stimuli such as light and sound.

The correct responses were observed 18.4% of the time.

Researchers placed electrodes on participants' faces and head to monitor their brain waves, eye movements and chin muscles to confirm they were asleep and in the stage of sleep known as REM sleep. REM sleep is short for Rapid Eye Movement, the deepest of five stages of sleep.

Researchers also asked for their dream reports after they woke up.

The combination of results from these four separate teams most convincingly affirms that this communication is possible, Konkoly said.

The findings were published Feb. 18 in the journal Current Biology.

Dream research is still a field with many unknowns. Other studies have had sleepers recall their dreams after waking, but that can be flawed, with many of the details forgotten, Konkoly said.

Questions about REM sleep and dreams have been set aside by some researchers in years past while more focus was placed on other aspects of sleep, Konkoly said.

But lucid dreaming can be used to practice a skill or work on a problem, Konkoly said. Giving people more support for their dream content in real time might be an option, she said.

Some people use lucid dreaming for confronting nightmares, Konkoly said, but sometimes a lucid dreamer will forget what they want to do or get scared so the experience doesn't go the way they want.

"You can envision two-way nightmare therapy where you have a therapist on the other side saying, 'No, it's OK,' " said Konkoly, who works in Ken Paller's Cognitive Neuroscience Laboratory at Northwestern. Paller is a study co-author.

One of the procedures used in the study was developed by Michelle Carr, now at the University of Rochester. She was a student of Tore Nielsen, director of the Dream and Nightmare Laboratory at Sacre-Coeur Hospital in Montreal, who said he was encouraged to see it being used in new research.

"The given knowledge about dreaming is that it's all in the brain -- it's independent of everything else, there's active inhibition of all the sensory systems and it's all just the brain sort of creating stories for itself, and that's not a view that I've subscribed to much," Nielsen said.

This study offers evidence that at least sometimes during lucid dreams, and even in those the sleeper is unaware of at the time, people are able to perceive things and then do "higher-level operations on that information that they received," he said.

This opens the doors a little more to understanding dreaming, Nielsen said.

"It is providing us with a new methodology for studying dreams," he said. "So, we're going to be able to get in there and influence dreams and measure what's happening in the dream experience much more closely than we have been able to. This is a big step for research."

The U.S. National Institute of Neurological Disorders and Stroke has more on the anatomy of sleep.