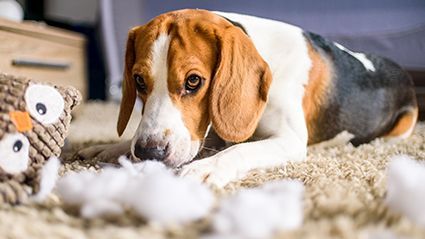 There's an expanded nationwide recall of Sportmix pet food products underway, after links were found between a mold-borne toxin in the food and the deaths of 70 dogs, with 80 other dogs being sickened, the U.S. Food and Drug Administration announced Monday.

The announcement expands upon a recall first issued on Dec. 30 by Midwestern Pet Foods, Inc. At the time, the company said that at least 28 dogs had already died after eating Sportmix pet food.

Testing of the pet food products conducted by the Missouri Department of Agriculture found "very high levels of aflatoxins," the FDA noted.

Aflatoxins are toxins produced by the mold Aspergillus flavus. They can trigger very serious illness in pets, and these poisons can be present even if the food doesn't appear to be moldy.

On Monday, after reports of at least 70 canine deaths tied to the tainted food, Midwestern "expanded the recall to include all pet foods containing corn and manufactured in the company's Oklahoma plant, and having an expiration date on or before July 9, 2022," the FDA said in its statement.

The agency said not all of the dog deaths have been confirmed as caused by aflatoxin, but the FDA also stressed that "this count is approximate and may not reflect the total number of pets affected."

The agency said it is conducting an ongoing investigation at the Oklahoma manufacturing facility.

In the meantime, consumers can go to the FDA site for a complete list of recalled Sportmix products. If consumers find the product in their home, they should "consult their veterinarian, especially if the pet is showing signs of illness," the FDA said. "The pet owner should remove the food and make sure no other animals have access to the recalled product."

Signs of aflatoxin illness in pets include:

Aflatoxins can attack and damage the liver over time, potentially causing liver failure and death.

The FDA noted that "pets are highly susceptible to aflatoxin poisoning because, unlike people, who eat a varied diet, pets generally eat the same food continuously over extended periods of time. If a pet's food contains aflatoxins, the toxins could accumulate in the pet's system as they continue to eat the same food."

If you think your pet might have been sickened with aflatoxin-tainted pet food, bring the animal to a veterinarian. It's helpful to take a picture of the pet food label, including the lot number, according to the FDA.

"There is no evidence to suggest that pet owners who handle products containing aflatoxin are at risk of aflatoxin poisoning," the agency added. "However, pet owners should always wash their hands after handling any pet food."

There's more on product recalls at the U.S. Food and Drug Administration.