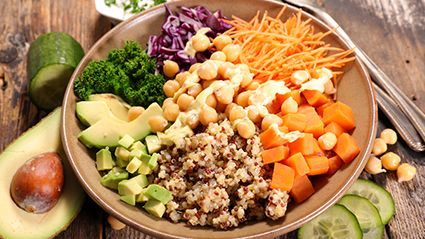 Another study has confirmed what scientists have long known -- eating a lot of red meat may be bad for your heart.

On the other hand, opting for plant-based proteins instead of ordering a steak may boost your cardiovascular health.

In a new study, researchers followed more than 40,000 men in the United States over a 30-year period. The investigators looked at how red meat consumption influenced their risk of heart disease, the leading cause of death among American men and women.

There is a growing body of evidence that people who eat lots of red meat, especially processed red meat, are more at risk for numerous health issues, including heart disease and certain types of cancer.

But the researchers noted that prior research on this topic has often examined diets full of red meat next to other potentially unhealthy diets.

"The observed associations are likely to depend on the foods to which red meat is compared," said study author Laila Al-Shaar, a visiting scientist at Harvard T.H. Chan School of Public Health, in Boston. "Analyses that fail to specify comparison foods are, by default, mainly comparing red meat with these less healthy sources of calories."

When compared to other unhealthy foods, the health risks associated with red meat may not be as stark. In this new study, the researchers decided to see if the risk of heart disease decreases when protein-rich, high-quality plant foods are eaten in place of red meat.

Based on detailed questionnaires filled out by the study participants every four years from 1986 to 2016, Al-Shaar and colleagues discovered that eating high-quality plant proteins like nuts, peas, beans, lentils or soy instead of red meat lowered the risk of heart disease by 14%. Whole grains and dairy products also seemed to benefit heart health when eaten in place of red meat.

And replacing red meat with plant proteins had an even stronger benefit for those over 65 years of age, the findings showed.

"People at this age are more likely to develop cardiovascular morbidities such as hypertension," said Al-Shaar. "Therefore, the substitution of plant-based proteins for red meat could possibly improve the cardiometabolic profile of this 'high-risk' group and consequently lower their heart disease risk."

The findings were published online Dec. 2 in the BMJ.

By highlighting the protective effect of plant proteins, the study emphasizes that the key to a heart-healthy diet may be less about eliminating red meat and more to do with incorporating plant-based foods as much as possible, according to Connie Diekman, a food and nutrition consultant in St. Louis and a past president of the Academy of Nutrition and Dietetics.

"This study focuses on something that I think we do need to remind everyone," Diekman said. "Yes, we need to limit our red meat intake because it is connected to heart disease risk. But is the problem just that? Or isn't it that when you eat too much red meat, you don't eat the plant foods that we know contain compounds that help fight disease?"

But the jury is still out on the relatively new, plant-based meat substitutes, according to the study authors. Al-Shaar said that "further research is needed to evaluate the health effects of these meat substitutes."

Diekman agreed, saying, "If you really miss that burger, but you don't want it to be red meat, then you can use one of those 'fake meats' as an option -- but whether there's a benefit to them entirely, I don't think we have that answer yet."

Diekman also noted that this study does not prove cause and effect. It does not show that eating red meat was singularly at fault for raising heart disease risk or that the substitution of plant proteins alone was to thank for the reduced risk observed among the study's participants.

The researchers can't rule out the possibility that unmeasured factors influenced their results. Still, they accounted for several important personal and lifestyle factors that could raise or lower one's risk for heart disease, including age, tobacco and alcohol use, and physical activity.

According to Diekman, this study points to an idea that is common across most nutritional studies: balance is critical. "If you enjoy red meat, identify which cuts, which preparation you prefer, and enjoy that on an occasional basis, and in smaller amounts," Diekman said. To offset your red meat consumption, try incorporating other proteins into your diet, like beans, quinoa or tofu.