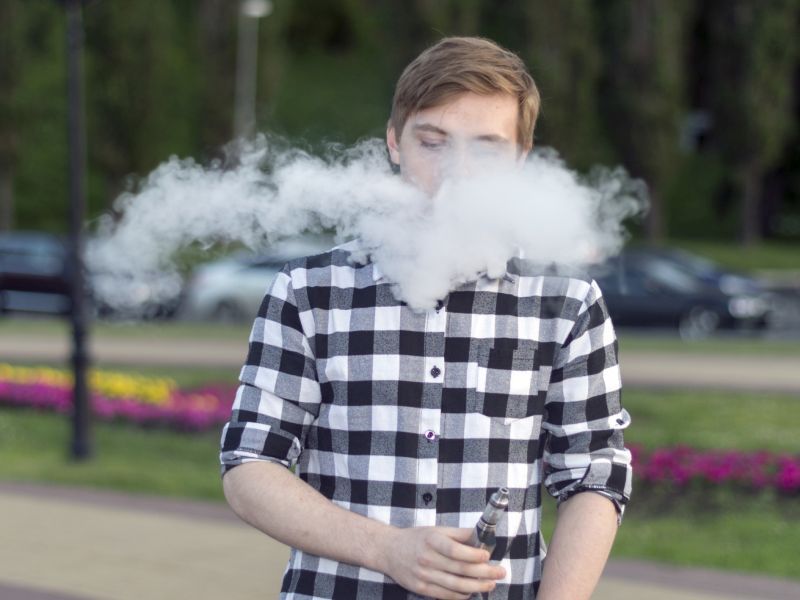 Instead of being a safe alternative to smoking, vaping may serve as an enticing gateway to the cigarette habit for some teens, new research shows.

It's known that teens who use electronic cigarettes are more likely than their peers to take up the real thing. But the question of cause-and-effect has remained: Perhaps those same kids might have started smoking anyway?

But the new study casts doubt on that idea.

Researchers found that among teens who said they had no intention to ever smoke, those who vaped were more than four times more likely to eventually try cigarettes.

That, experts said, suggests that e-cigarettes can predispose kids to tobacco use -- possibly by fueling a craving for nicotine.

"It suggests they're basically graduating to cigarettes, which is what everyone is afraid of," said Dr. Cedric "Jamie" Rutland, a pulmonologist who was not involved in the study. "They had no intention to smoke, and then a couple years later they were."

Rutland is a national spokesperson for the American Lung Association and an assistant clinical professor at the University of California, Riverside School of Medicine.

In his practice, Rutland said he's found that teenagers who vape often have "no clue" what they are inhaling. And sometimes it's enough to simply tell them, he said.

"Kids seem to think that smoking and vaping are two completely different things," Rutland said. "But they're not."

E-cigarettes are battery-powered devices that work by heating a liquid containing nicotine and other substances, like propylene glycol and glycerol. The heat creates a "vapor" that users inhale.

Vaping allows people to avoid tobacco smoke, but they are still breathing in nicotine, chemicals and ultra-fine particles. That can cause immediate problems, Rutland noted -- including inflammation and injury to lung tissue, wheezing and asthma flare-ups.

Much less is known about the long-term health consequences, Rutland said, but there is concern about kids being regularly exposed to nicotine. That's not only because they could get hooked. Nicotine also affects the developing brain in ways that may impair learning and behavior, according to the U.S. Centers for Disease Control and Prevention.

But the question of whether e-cigarettes serve as a gateway to traditional cigarettes has not been fully answered.

In theory, kids who vape then move on to cigarettes might have intended to smoke all along, said Dr. Olusegun Owotomo, the lead researcher on the new study.

But what his team found "challenges that notion," said Owotomo, a resident at Children's National Hospital in Washington, D.C.

By the next survey, those e-cigarette users were more likely to have tried cigarettes -- but only if they'd previously had no plans to start smoking.

Among kids with no intention to smoke traditional cigarettes, almost 10% of e-cigarette users went on to try cigarettes, versus about 2% of other teens. That contrasted with their peers who had planned to start smoking. E-cigarette use made no difference in whether they eventually tried cigarettes.

The study could not look at whether vaping got some kids hooked on nicotine, Owotomo said -- but that is a possibility.

He agreed that many teenagers who vape are in the dark about what they're inhaling. Both doctors and parents, Owotomo said, should talk to kids about the ingredients in e-cigarettes, and why they should never vape, "even recreationally."

U.S. teenagers today are less likely to smoke than past generations. But there is a concern that the rise in vaping could undo some of that progress, Owotomo said.

According to CDC figures for 2018, almost 21% of U.S. high school students had used e-cigarettes in the past year.

The U.S. Centers for Disease Control and Prevention has more on the risks of vaping.