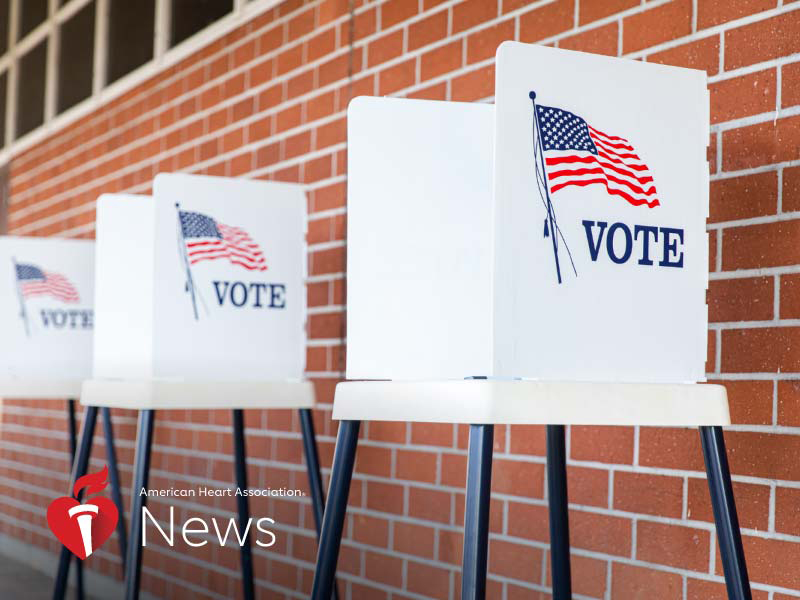 We interrupt your latest binge of breaking political news, fear-provoking campaign commercials and angry posts from your favorite pundit to report that politics can be stressful.

That stress can be bad for your health. But – some good news here – you can take steps to manage it.

If the election has your heart racing and stomach churning, you have company. According to the American Psychological Association's Stress in America survey for July, 77% of Democrats and 62% of Republicans said the political climate was a significant source of stress.

A study published last September in the journal PLoS ONE hinted at the toll such stress can take: Roughly a fifth or more of 800 respondents reported losing sleep, being fatigued or suffering depression because of politics. More than 11% said politics had hurt their physical health at least a little.

That's a lot of stress-sick people, said the study's lead author, Kevin B. Smith, the Leland J. and Dorothy H. Olson Chair of Political Science at the University of Nebraska-Lincoln.

Melissa DeJonckheere, an assistant professor in the department of family medicine at the University of Michigan in Ann Arbor, had similar findings in a smaller survey that questioned 14- to 24-year-olds about the 2016 presidential election. Before the election, 86% reported issues such as anxiety, fear or the feeling that things were out of their control. About a fifth reported physical problems – not being able to sleep, and even nausea.

It was a nonpartisan problem, she said. "Even people who said that they don't follow politics, or they're explicitly not interested in any of the candidates, were still having negative emotional responses to the election."

That research, published in Child and Adolescent Psychiatry and Mental Health in 2018, noted that stress in youth has been linked to cardiovascular disease, depression, substance abuse, behavioral problems and more in adolescents, plus problems in adulthood.

Smith, who has done extensive work on the biology of political behavior, said the question of whether political stress affects us differently than other types of stress hasn't been answered. But he suspects a few modern factors might be making things worse.

"We have an incredibly polarized political environment right now," he said. And thanks to smartphones and computers, we're constantly soaking in it.

"It's just omnipresent in our lives," he said. He contrasted it to the stress that comes from, say, being a football fan. He is one, and every year, "I produce a lot of stomach acid over the Dallas Cowboys' playoff chances. But the football season ends, and that stress goes away.

Politics always comes with a degree of stress, but the many challenges the country faces in 2020 would seem to make this election more anxiety-producing than most. People of every political stripe have strong opinions about the pandemic, the economy, race relations, the Supreme Court vacancy left by Ruth Bader Ginsburg's death and any number of other issues that are important to them.

The anxiety is not always accidental. Campaigns can feed off of fear, said Dr. Robert Waldinger, a professor of psychiatry at Harvard Medical School in Boston and director of the Harvard Study of Adult Development. After all, they're trying to make voters choose sides.

Couple that with the divisions that have been fanned about how to respond to the coronavirus, he said, and "our bodies are much more in chronic fight-or-flight mode than they probably were before the pandemic."

To cope, Waldinger – who is also a Zen priest – recommends regulating your exposure to the constant stream of scary political news.

"One of my meditation teachers has a quote that I really like. She said, 'Your mind is like tofu; it tastes like whatever you marinate it in,'" he said. He stays informed by reading the newspaper in the morning, later listens to a little radio, but avoids TV entirely. "And I try my best to stay away from the news feed on my phone."

However you choose to get news, "be careful and be deliberate," Waldinger said. "And don't do it late in the day as you're wanting to settle down and sleep."

"The youth in our study talked about taking on activist roles, volunteering, taking more classes to learn about how politics affects them," she said. She thought that could be particularly important for people who are too young to vote, because it could give them a sense of control and purpose, which can help reduce stress and improve mental health.

Finding common ground with neighbors is a good idea, Waldinger said. "I'm not going to change the minds of my neighbors who are on the other side of the divide. But they're still my neighbors." Connecting around a cause such as a walk to end hunger could benefit everybody.

And don't let political dramas divide you from family, he said. "I would say, see the culture wars as the enemy, the thing to be fended off."

Because, he said, "This moment is going to pass. We don't know what it's going to morph into, but it's not going to stay the same."