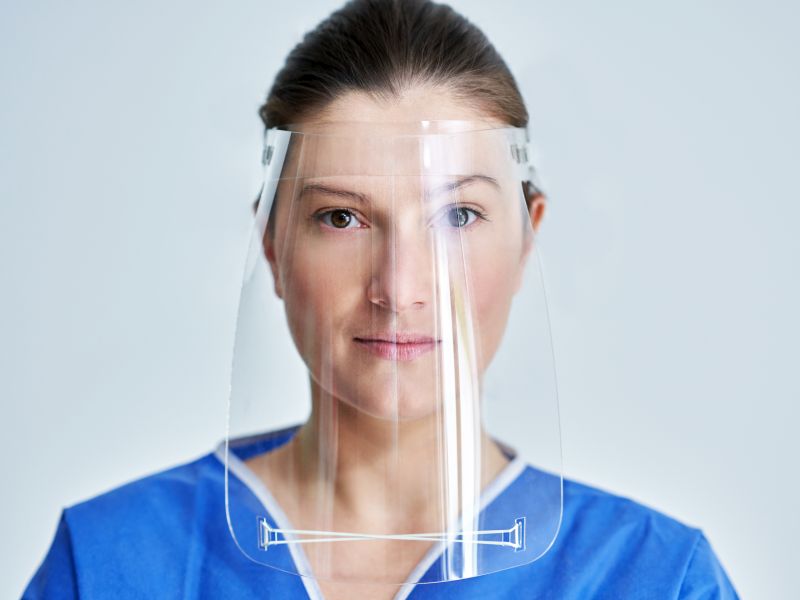 For people hoping to swap their face masks for a plastic shield, a new study delivers some bad news: They are not a good alternative.

In experiments that visualized the likely travel patterns of "respiratory droplets," researchers found that plastic face shields are poorer barriers than standard masks. The shields, which sit away from the face and have gaps at the bottom and sides, would allow many more droplets to escape if the wearer coughed or sneezed.

The same was true when the researchers ran the experiment using masks with exhalation valves.

Experts said the findings are no surprise.

The U.S. Centers for Disease Control and Prevention already advises people not to rely on face shields or masks with valves, said Dr. Ravina Kullar, a spokesperson for the Infectious Diseases Society of America.

"They're just not protective enough," said Kullar, who is also an adjunct faculty member at the University of California, Los Angeles School of Medicine.

That may be disappointing to fatigued Americans who want to do what's right, yet are tired of mask-wearing, she acknowledged.

"But the numbers [of COVID-19 cases] are starting to decline again," Kullar said. "If we all stick together, keep wearing masks and practicing social distancing, we can do this."

If people want to wear a face shield over a mask, Kullar is all for it. "It gives you added protection for your eyes, and keeps you from touching your face," she said.

For the new study, researchers at Florida Atlantic University (FAU), in Boca Raton, set up a simulation of what would happen if a person sneezed or coughed while wearing different face coverings: a non-medical-grade mask; a face shield; or a mask with an exhalation valve.

The researchers outfitted a hollow manikin head with a manual pump that simulated a sneeze or cough -- expelling distilled water and glycerin through the mouth. Laser "sheets" allowed the team to visualize the travel paths of any tiny droplets that thwarted the face covering.

The investigators found that face shields, predictably, blocked the initial forward momentum of the "sneeze." But fine droplets easily skirted around the shield boundaries and spread into the air.

The mask with the valve performed as expected -- sending unfiltered droplets into the surrounding air.

"Over time, these droplets can disperse over a wide area in both lateral and longitudinal directions, albeit with decreasing droplet concentration," researcher Manhar Dhanak, a professor at FAU, said in a statement from the university.

The standard mask, on the other hand, did a much better job of containing droplets -- allowing fewer to be expelled and limiting their spread. (The tests involved "surgical" masks that are marketed to the public and not recommended for medical use.)

The study, published Sept. 1 in the journal Physics of Fluids, did not test any face coverings' ability to prevent transmission of SARS-CoV-2, the virus that causes COVID-19.

In the real world, that would depend on many factors, said Dr. Gregory Poland, an infectious disease specialist at the Mayo Clinic, in Rochester, Minn.

The droplets that elude a face covering would have to contain infectious virus -- and expose another person to a big enough "load" of those particles -- to transmit the disease, he explained.

That said, the disadvantages of the face shield are obvious -- including for the wearer, according to Poland. "Air is drawn in and under," he said. "You increase the chances of breathing in whatever is in the ambient air."

Like Kullar, Poland is in favor of the mask-shield combination. But as a stand-alone, he said, the face shield is "the least successful option."

Of course, cloth masks only work if they are worn properly.

"Don't wear it under your nose," Poland stressed. Leaving the nose exposed in public settings "is the riskiest thing you can do," he said.

And while mask-wearing is important, Kullar said that alone does not cut it: Maintaining physical distance from other people remains critical -- including outdoors.

"I don't think we emphasize that message strongly enough," Kullar said. "The risk is lower outdoors than indoors, but the risk is still there."