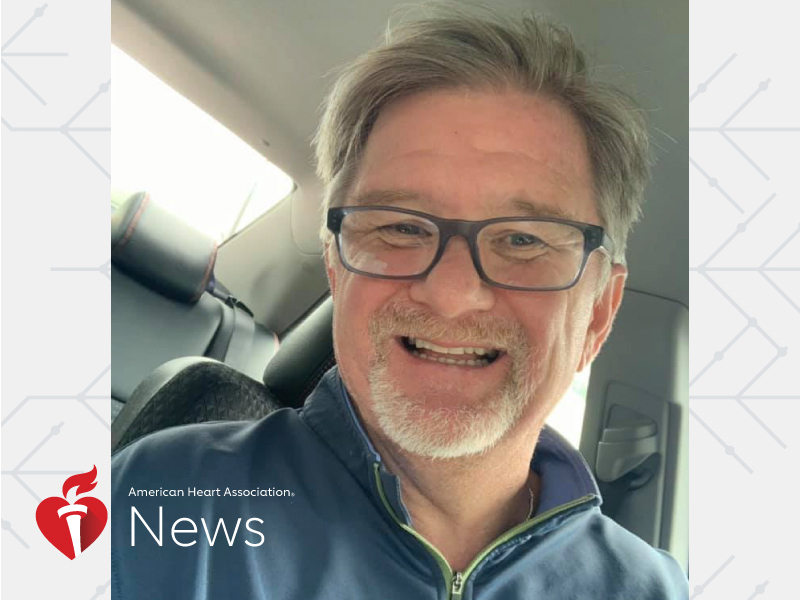 Eric Olsen's energy was lacking. His mother thought he sounded tired on the phone. A work colleague noticed he didn't seem like himself.

Then he found himself doubled over in his kitchen, gripping the counter with pounding pain in his chest.

Eric blamed this "horrible heartburn" on his stressful life as a television news director. Even in normal times, a newsroom is a hectic place where unhealthy habits can flourish and "we survive on pizza and caffeine," he said. And for the past several days, Eric had overseen nearly nonstop coverage of a mass shooting in Virginia Beach, Virginia.

He hoped antacids and sleep would help him power through the pain. He had a meeting the next morning with the president of the company buying his television station, WTKR/WGNT in the Hampton Roads region of Virginia.

But sleep was elusive that night in June 2019. Driving to work the next morning, he experienced a cold sweat. Along with chest pain, he now had pain in his left arm, and it was worsening.

Eric arrived at work and called his younger brother, Mark Olsen, a sheriff's deputy in Illinois who's had emergency medical training.

"Are you having chest pains?" asked Mark, who had a heart attack a couple of months earlier.

When Eric said yes, Mark said, "You're having a heart attack, buddy."

Mark told Eric to get to a hospital immediately. Luckily, Sentara Norfolk General Hospital was only a few blocks away.

Eric was indeed having a heart attack. He had almost 100% blockage of a branch of his left anterior descending artery. Doctors inserted a stent to restore blood flow.

Later that day – around six and a half hours after arriving at the hospital – Eric was already walking. When he left the hospital two days later, he thought, "Wow, I'm lucky I'm still here."

Looking back, Eric, now 52, realizes he ignored several risk factors, including a family history of heart disease. Perhaps he had a false sense of security because of steps he'd taken to get in better shape, such as giving up alcohol and losing 30 pounds after being diagnosed with Type 2 diabetes. He played golf and worked out at a gym. But in the weeks before the heart attack, he lacked the energy to exercise.

Then there was the newsroom pressure. In addition to covering the Virginia Beach shooting and working to ensure his news team's safety that week, the previous fall he was news director in North Carolina and had to evacuate his station in minutes amid rising water during Hurricane Florence. That event "cranked the stress meter about as high as it could go," he said.

Following his heart attack, Eric spent a weekend with his daughter, Katie, now 18, and her mother, who live in North Carolina, and vowed to make more lifestyle changes.

He takes medication to reduce the chances of another heart attack and to control diabetes, a condition that increases the risk for heart attacks and strokes.

Eric, still leading his news team in Virginia, pays more attention to what his body is telling him. For instance, in March, he didn't feel right. Although his symptoms weren't as severe as the day of his heart attack, he didn't take any chances and went to the hospital. His doctor discovered that Eric was experiencing arterial spasms and needed a change in medication.

"Lucky for me, no new stent, no new blockage," Eric said. "I feel fantastic."

His brother Mark, 49, had two stents inserted when he had a heart attack. He shares the message he gave Eric that morning: If you're having extreme chest pain, get to a doctor immediately.