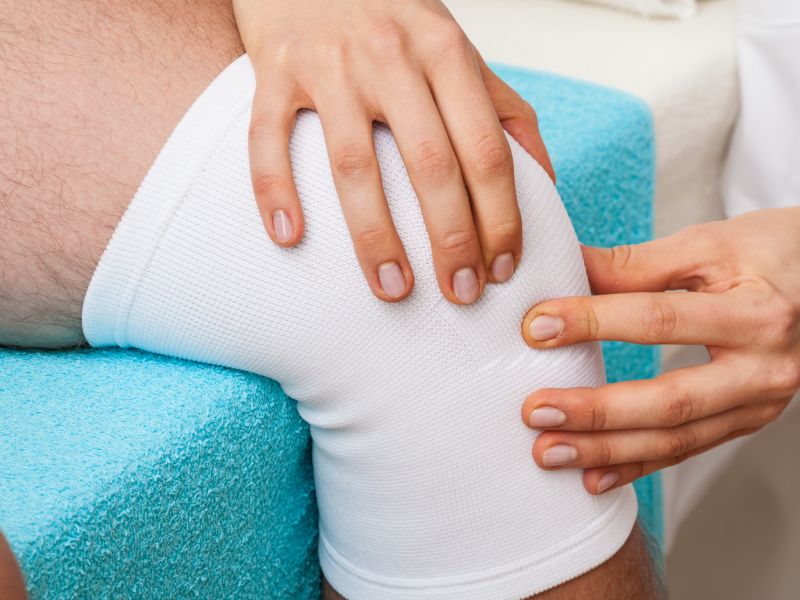 There are currently no medications that can slow down the common form of arthritis that strikes aging knees and hips. But a new study suggests a powerful, and expensive, anti-inflammatory drug could potentially do just that.

The drug, called canakinumab (Ilaris), is used for certain rare rheumatic conditions marked by widespread inflammation. They include juvenile idiopathic arthritis, where the immune system mistakenly attacks the lining of the joints.

The new findings suggest the drug might hold promise for easing the highly common type of arthritis that sets in with age: osteoarthritis.

The researchers found that among 10,000 patients given canakinumab in a clinical trial, the risk of having a knee or hip replacement was cut by at least 40% over four years. Those surgeries are generally done to treat severe osteoarthritis.

However, the trial -- funded by Ilaris-maker Novartis -- has a major limitation: It was not actually designed to test the drug for osteoarthritis. Instead, researchers wanted to know if it could prevent heart attacks in high-risk people.

The reduction in joint replacements was a fortuitous finding.

"We're hoping that this will stimulate further research," said Dr. Paul Ridker, the senior researcher on the study. "These data derive from a very large trial, and they're pointing to a potential new pathway in the treatment of osteoarthritis."

Canakinumab works by blocking interleukin-1 beta (IL-1β) -- a chemical produced by the immune system that helps regulate the body's inflammatory response. Recent studies have pointed to a role for IL-1β in the inflammation that marks osteoarthritis.

"Back when I was in medical school, we learned that rheumatoid arthritis was an inflammatory condition and osteoarthritis was 'wear-and-tear,'" said Ridker, of Harvard Medical School and Brigham and Women's Hospital, in Boston.

But, he said, the wear-and-tear concept is untrue, as osteoarthritis does seem to involve systemic inflammation.

In fact, a few small clinical trials have tested various IL-1 inhibitors for easing the pain of knee osteoarthritis. And they've come up empty.

But that, Ridker said, may simply be because the trials were too small and too short-term.

Dr. Nancy Lane, a professor and arthritis researcher at the University of California, Davis, agreed.

She praised the new study as "groundbreaking." Even though the trial did not directly test canakinumab for arthritis, Lane said, the reduction in joint replacements is major.

"Right now, we have no treatments that prevent osteoarthritis or slow its progression," Lane said.

At this point, she stressed, it's not clear that canakinumab actually does slow joint degeneration. It's possible it reduced people's pain, which can delay hip or knee replacements.

So that's one of the questions for future research, Lane said.

Lane co-wrote an editorial accompanying the study, which was published online Aug. 3 in the Annals of Internal Medicine.

The findings are based on a clinical trial that enrolled more than 10,000 people who'd suffered a heart attack. The hope was to cut the risk of a repeat heart attack by giving them canakinumab along with standard medications. Half of the patients were randomly assigned to take the drug, while the other half used a placebo.

Canakinumab was taken by injection, once every three months.

Ridker's team found that over roughly four years, patients on the drug were 40% to 47% less likely to need joint replacement surgery, versus the placebo group.

There was one key element to the trial: All patients had elevated blood levels of C-reactive protein (CRP). Ridker said this is a marker of chronic, low-grade inflammation in the body.

According to Lane, that raises an interesting possibility. Maybe there is a group of arthritis patients -- those with high CRP -- who are more likely to benefit from canakinumab.

Because the drug inhibits an immune system chemical, the main risk is that it can leave people more vulnerable to serious infections. In the heart disease trial, patients given canakinumab had a somewhat lower heart attack risk, but they also had a higher rate of fatal infections -- though the risk was low overall.

If canakinumab is proven to prevent joint replacements, there will be a practical issue -- the drug's huge price tag, at thousands of dollars per injection. In 2018, the U.S. Food and Drug Administration rejected Novartis's bid to have canakinumab approved for heart disease; some cardiology experts had concluded the benefit was too small to justify expanding its use.