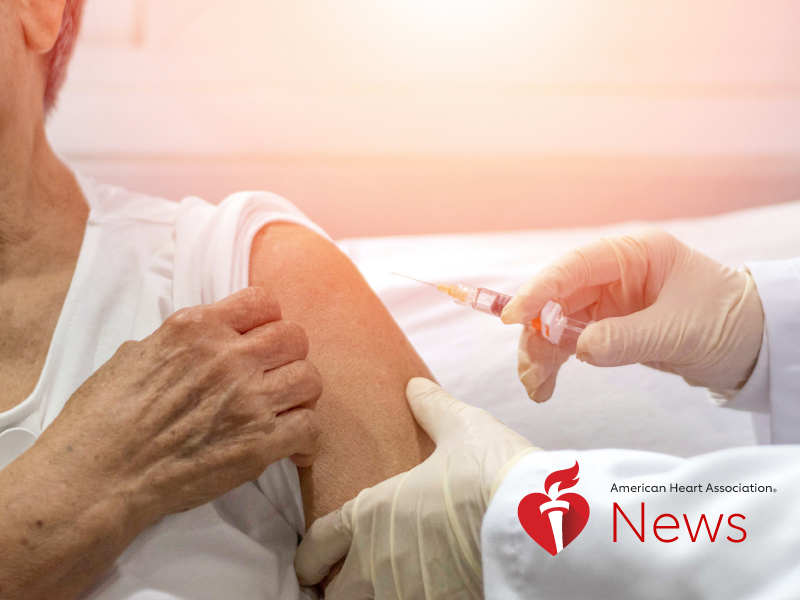 Hospital patients at high risk for influenza had lower rates of death, heart attack, mini-stroke and cardiac arrest if they were vaccinated against flu during their hospital stay, a new study has found.

The study focused on certain groups at high risk for flu and its complications: those 50 and older, nursing homes residents, American Indians/Alaska Natives, and people with a chronic medical condition, AIDS or obesity. All but the American Indian/Alaska Native group were less likely than other hospitalized patients to receive an in-hospital flu vaccination.

"The flu vaccination rate was paradoxically low in high-risk groups, who are already more susceptible to getting the flu than the general, average-risk (hospital) population," said Roshni A. Mandania, lead author and a fourth-year medical student at Texas Tech Health Sciences Center at El Paso.

For instance, just 1.8% of adults 50 and older in the study were vaccinated in the hospital, compared with rates of about 15% for all hospitalized patients.

"These numbers are alarming and simply hard to ignore," Mandania said.

Researchers looked back at records from more than 7 million hospital patients in the 2014 National Inpatient Sample, a large public database that captures U.S. hospital stays. Only about 168,000 of the patients were vaccinated against the flu during their hospitalization. The study did not account for patients who were vaccinated before entering the hospital.

However, the study also found vaccinated patients in several high-risk groups had higher rates of stroke and heart failure, a result the researchers are investigating further. In the 50-plus group, risk of stroke was 85% higher and heart failure 78% higher. For nursing facility residents, rates were 92% and 33% higher, respectively, and for obese patients, 48% and 78% higher.

Previous studies suggest flu vaccination protects against stroke and heart failure, but those were done in people who were not hospitalized, said epidemiologist Donna Arnett, dean of the University of Kentucky College of Public Health. She was not involved in the study.

One possible explanation might be that the new study didn't account for other medical conditions that could raise the risk of stroke or heart failure in high-risk patients, she said.

During the 2018-19 flu season, about 45% of U.S. adults were vaccinated, according to the Centers for Disease Control and Prevention. Flu season starts in October and runs into spring.

In his testimony to Congress last month, CDC Director Dr. Robert Redfield said getting a flu shot will be particularly important to reduce illness – and ease hospitals' burden – amid what may be a surge in COVID-19.

"The benefit of influenza vaccination cannot be understated," said Arnett, a past president of the AHA. "Vaccination results in lower rates of serious infection, hospitalization, cardiovascular events and death.

"Since the influenza virus is constantly changing, the vaccination changes every year to capture the most likely forms of the virus that are predicted to be transmitted. Therefore, it's important for everyone to be vaccinated."