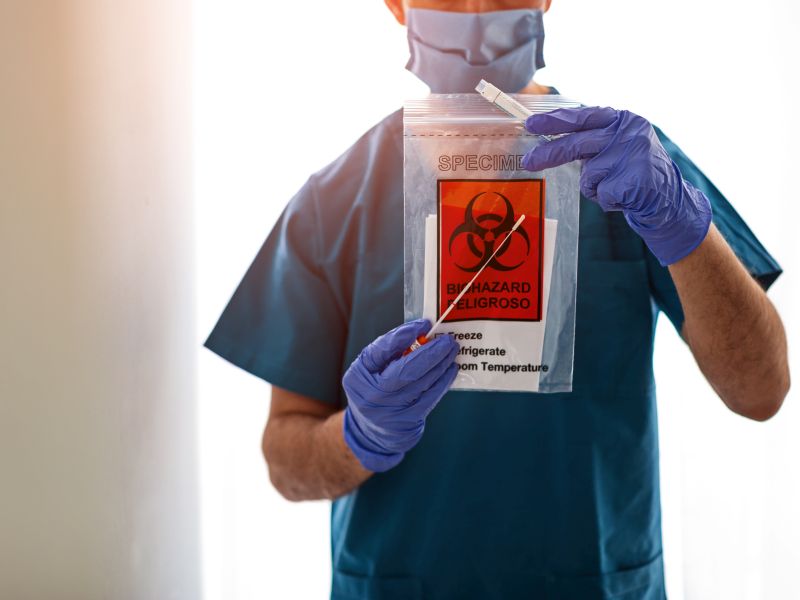 As yet another record for the seven-day average of new coronavirus cases in the United States was broken on Sunday, federal health officials prepared to start pooled testing for COVID-19.

On Sunday, Kentucky, Louisiana, Oregon and South Carolina all set new single-day records for new cases, the Washington Post reported. Idaho, Nebraska, Iowa and five other states have seen their seven-day averages for daily new fatalities rise by more than 40 percent in the past week, the newspaper added.

In Florida, more than 100 hospitals have run out of ICU beds for adults. The state has reported more than 10,000 new COVID-19 cases on 12 different days in July, the Post reported.

Meanwhile, Los Angeles is "on the brink" of shutting down again, Mayor Eric Garcetti said Sunday. Over the past week, Los Angeles County has seen its highest number of coronavirus hospitalizations since the pandemic began, the Post reported.

In some good news, the U.S. Food and Drug Administration on Saturday gave emergency approval to pooled testing, which combines test samples in batches, the AP reported.

The emergency use approval was given to Quest Diagnostics to perform its COVID-19 test with pooled samples. It is the first test to be authorized to be used in this way, the AP reported.

With pooling, laboratories would combine parts of samples from several people and test them together. A negative result would clear everyone in the batch. A positive result would require each sample to be retested.

Pooling works best with lab-run tests, not the much quicker individual tests used in clinics or doctor's offices, the wire service said. Theoretically, pooled testing could be used at schools or businesses.

"It's a really good tool. It can be used in any of a number of circumstances, including at the community level or even in schools," Dr. Anthony Fauci testified during a Senate hearing last month, the wire service reported.

The technique works best when fewer than 10% of people are expected to test positive, the AP reported. For example, pooling would not be cost-effective in Arizona, where a surge has pushed positive test results to well over 10%. But the approach could make sense in areas with a lower rate of positive results, the wire service said.

As case counts and deaths have continued to climb, more states, cities and major retailers have turned to face mask mandates to try to stem the spread of COVID-19.

Increasingly seen as a last hope to slow soaring infection rates across the country, Gov. Asa Hutchinson of Arkansas announced a face covering requirement last week after taking a more hands-off approach for months, the New York Times reported. Colorado Gov. Jared Polis also issued a mask order last week, after questioning whether such a mandate would be enforceable.

Masks are now mandatory in more than half of U.S. states, the Post reported, and Target and CVS joined other retailers in announcing that all customers in their stores must wear masks.

The new mask mandates suggest that officials and business leaders across America are painfully aware that cases have spiked in 41 states over the past two weeks and things will only worsen if nothing is done, the Times reported.

Still, Georgia Gov. Brian Kemp went against the tide and nullified all local mask mandates last Thursday, the Post reported. That same day, Georgia recorded it second-highest number of coronavirus cases since the start of the pandemic, with 3,871 new infections reported.

Meanwhile, states continued to try to rein in surging case counts. California and Oregon have rolled back their reopenings, two of several states across the country that are seeing spikes in cases.

On Monday, Florida surpassed 350,000 confirmed cases, according to a Times tally. The state is now third in case counts, behind only California and New York.

Florida took more than three months to reach 100,000 coronavirus cases, but then took just two weeks to jump to 200,000, CBS News reported. Gov. Ron DeSantis said in a news conference last week that the state is doing roughly 90,000 tests per day but the results were taking too long to process.

"One thing that I think is clear is that we need to get these testing results back in a timely fashion," DeSantis said. He added that the state would be shifting business away from commercial labs that have not been able to return test results in 48 hours, as originally agreed upon when testing was expanded in the beginning of May.

The case spikes are resulting in another grim fact: Hospitals across the South and West are being flooded with COVID-19 patients and are having to cancel elective surgeries and discharge patients early as they try to keep beds open, the Times reported.

In California, doctors are shipping patients as far as 600 miles away because they can't be cared for locally, the Post reported. Nurses from around the country are pouring into Florida to shore up exhausted medical workers. Mayors in Texas are demanding the right to shut down their cities to avoid overwhelming hospitals.

Health officials said they are concerned that hospitals will soon hit a breaking point, the newspaper said.

Even though regular wards are being converted into intensive care units and long-term care facilities are being opened for patients too sick to go home, doctors say they are barely managing, the Times reported.

While hospital beds are easily converted for ICU use, the more difficult challenge is having enough advanced practice nurses who are qualified to care for such patients and equipment such as ventilators, hospital experts told the Times.

Hospitals can "pivot enough space," Jay Wolfson, a professor of public health at the University of South Florida, explained. "The trick is going to be staffing. If you get people burned out, they get sick, then you lose critical care personnel."

Beds aren't the only thing hospitals are running out of now: Some states have ordered refrigerated trucks to increase morgue space, the Times reported. In Texas, officials said the trucks were being readied because hospital morgues were filling up. In Arizona, two hospital systems in Maricopa County, which includes Phoenix, also plan to use refrigerated trucks.

By Monday, the U.S. coronavirus case count neared 3.8 million as the death toll passed 140,000, according to a Times tally.

While Hong Kong was struck early in the pandemic, the city managed to stamp out most local transmissions by the end of last month, the Post reported. But with more than 100 new cases of the virus confirmed on Sunday, that success might be threatened.

More than 500 new infections have been reported in Hong Kong over the past two weeks alone, totaling nearly one-third of all confirmed cases since the pandemic began, the Post reported.

Things continue to worsen in India. On Monday, the country passed 1.1 million infections and more than 27,000 deaths, a Johns Hopkins tally showed. The surge comes weeks after a national lockdown was lifted. Only the United States and Brazil have higher caseloads.

About a dozen Indian states have re-instituted lockdowns in high-risk areas, the AP reported.

Brazil is also a hotspot in the coronavirus pandemic, with more than 2.1 million confirmed infections by Monday, according to the Hopkins tally. It has the second-highest number of cases, behind only the United States.

Cases are also spiking wildly in Russia: As of Monday, that country reported the world's fourth-highest number of COVID-19 cases, at more than 770,000, the Hopkins tally showed.

Worldwide, the number of reported infections passed 14.5 million on Monday, with more than 606,000 deaths, according to the Hopkins tally.