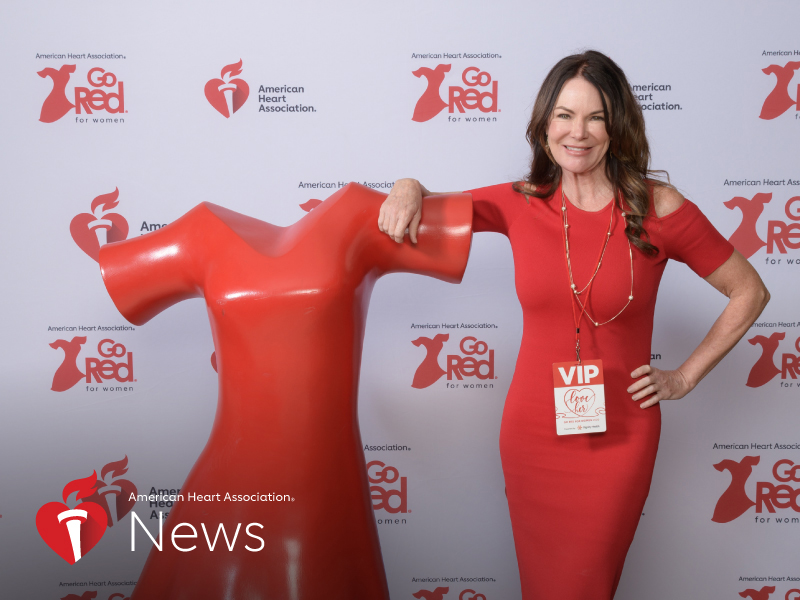 WEDNESDAY, May 27, 2020 (American Heart Association News) -- On the final morning of a family camping trip, Stacey Bailey woke up and started cleaning. After a difficult night caring for her sick granddaughter, Bailey hauled a pile of vomit-soiled sheets and towels to the campground showers.

Along the way, she felt nauseous and unusually exhausted.

"Maybe it's the altitude or I'm out of shape," she thought.

As she hung the wet linens from branches to dry, Bailey experienced a severe burning in her chest. Figuring the previous night's barbecued ribs were to blame, she chewed a few antacids. They didn't help. Soon, her jaw and neck began to ache.

Bailey sat down, her head in a fog, unable to muster a response when a passerby commented on her Arizona license plate. That's when it hit her. She'd seen this series of symptoms about six months earlier in the "Just a Little Heart Attack" video that played at an American Heart Association event. In the video, Elizabeth Banks plays a busy mom who ignores heart attack symptoms as she juggles getting kids ready for school and her husband and herself ready for work.

"I need you to put your nurse's cap on," Bailey told her daughter, Jocelynn Dorcy, an emergency room nurse. "These are my symptoms."

"That sounds like a heart attack," Dorcy said. "We're going to the ER."

Because she knew her mom was generally fit and didn't have coronary heart disease, Dorcy was tempted to dismiss the symptoms.

"They didn't match up with classic heart attack symptoms, but I knew females can experience it differently and it was alarming that the antacid wasn't helping with her heartburn," she said. "The ER nurse in me couldn't ignore the intuition that something was wrong."

Concerned an ambulance would have trouble finding them in the middle of Zion National Park, Dorcy loaded her sick daughter and mom into the car and drove two hours to a hospital in Richfield, Utah, advising her mom to tell the triage nurse she had chest pain so that she would be seen right away.

Initial tests showed a cardiac marker for a possible heart attack. Bailey was sent by ambulance to a hospital with a heart center in Provo, two hours away. By the time she arrived, Bailey's symptoms had subsided.

"I felt completely fine, other than a headache," she said.

Testing suggested her symptoms were stable. Things were going so smoothly that discharge papers were being filled out. Dorcy went to the car to fetch her mom's toiletry bag so she could freshen up before heading out.

"When I returned, my mom was gone. They told me they had rushed her urgently to the (catheterization) lab," Dorcy said. "I knew it had to be bad."

Once back home in Phoenix, she tried to make sense of what happened. She learned what she could about SCAD. She coped with depression and fear that her heart artery could tear again.

"When you are told your body is in great shape and then it fails you, it's pretty scary," she said.

Doctors aren't sure what triggered Bailey's SCAD. Often misdiagnosed or underdiagnosed, SCAD often occurs in people with few or no traditional cardiovascular risk factors. Bailey continues to seek answers and has connected with other SCAD survivors through social media.

She remains vigilant about her health, maintaining a healthy diet and getting plenty of exercise. Through cardiac rehab, she also learned about the importance of reducing stress.

"I used to think a certain amount of stress was healthy and I thrived on it," she said. "My complete outlook has changed, and I don't let things get to me anymore."

"It's better to get checked out and have them say it's just heartburn than dying because you didn't get help," she said.