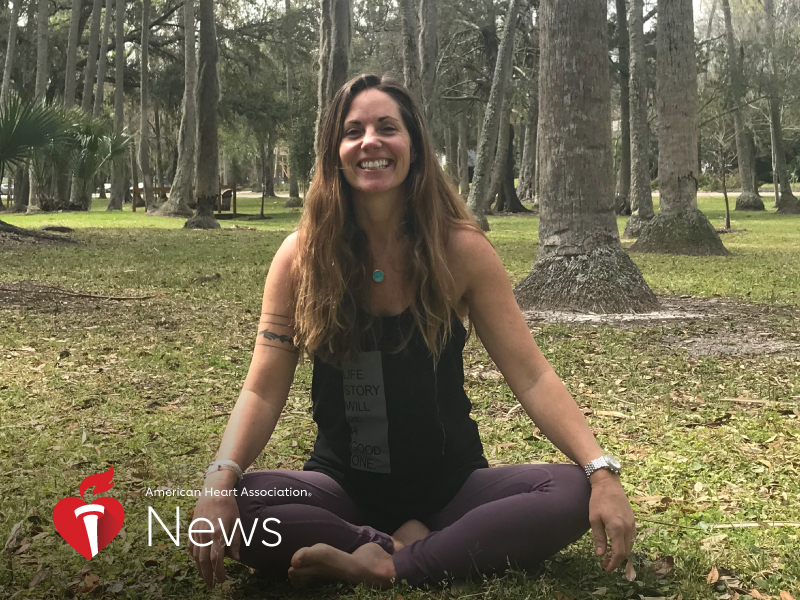 FRIDAY, May 15, 2020 (American Heart Association News) -- An agonizing headache jolted Whitney Spotts awake in the middle of the night.

She hoped she wasn't getting sick because she was enjoying a rare long weekend with her husband, Eric, and their 18-month-old daughter.

The following day, Whitney stayed in bed with excruciating pain behind her forehead. Later she started vomiting.

It was probably a bad case of the flu, thought Whitney, who worked as an emergency room physician assistant.

Later that night, Eric noticed his wife's speech was slurred and the right side of her face was drooping. He didn't know the cause but was alarmed enough to get her medical care.

The emergency room doctors ordered a CT scan and immediately saw blood in Whitney's brain. She'd suffered a stroke. They transferred her to a hospital in downtown Jacksonville, Florida. By then, the 34-year-old had lost the use of her right arm and leg.

"Of course I knew everything about the signs of stroke," Whitney said. "But when all these things were happening, it didn't even occur to me, I guess because I was so young."

Doctors told her the cause was a bursting of something on her brain stem called a cavernous malformation. Also known as a cavernoma or "cav-mal," it's an abnormality of the blood vessels that's usually present at birth. It can occur in any part of the body, but it's generally only a threat in the brain or spinal cord.

By this point, Whitney couldn't move her right side or talk, though in her mind she was speaking clearly.

Doctors recommended a risky surgery to remove veins from her brain stem. To get to her brain, the surgeon would have to perform a craniotomy, where part of the skull is removed to expose the brain and then later replaced.

"When the ER doctor came to talk to us, my immediate reaction was complete disbelief and fear," Eric said.

Meanwhile, Whitney's immediate family arrived, with her sister and father flying in from California. Whitney was told she would likely be on a ventilator and feeding tube when she came out of surgery.

"I felt terrified, but I also felt almost removed, like a sense of shock came over me," she said.

When Whitney awoke, she was relieved to find she wasn't connected to a ventilator or feeding tube. She still couldn't move her right side, though her facial droop receded quickly. She spent two weeks at the hospital, and four more in rehabilitation hospitals.

Her progress was slow. By the end of her stay, she could walk with assistance and partially move her arm. But she couldn't bring a fork to her mouth.

"At first, I thought it would be just a few days or weeks, but I finally accepted my new reality that things would be slower," she said.

The most challenging part was her inability to be active.

"I was the person who did the backflip off the side of the boat," she said. "I ran all the time. I kayaked. I did yoga on a standup paddleboard. I was super healthy and always moving my body."

She wonders now whether she overdid it – leading a turbo-charged life, with extreme work demands, a long commute and a young daughter.

"I was aware of the craziness of my life," she said. "I'm not saying it caused the stroke, but you learn in medicine what stress can do to the heart and the brain. It is a real thing, so it's kind of silly to think it has no role."

Once Whitney returned home, she and Eric needed help with their daughter, Stella. Both their mothers pitched in as Whitney continued physical and occupational rehab. Initially she went almost daily, then realized she was trying to force – unsuccessfully – a speedier recovery.

"I had lost my job, couldn't drive, couldn't make food, couldn't put my daughter in her car seat. There were a million things I couldn't do. I was mad," she said. "But I knew I needed to slow down."

Her stroke was in January 2019. She started driving by the end of the year. Although her movement has improved, she still doesn't have full use of her arm and has balance issues. She tires easily and sometimes has trouble focusing her thoughts. But rides a tricycle to the beach and takes walks.

"Honestly, the emotional part of this has been harder than the physical," she said. "I want to accept, but not give up. I'm not grateful for how it happened, but I am grateful for the new lens that I look at life through."

Eric said they both realized how little control they really had over their future.

"We both have a new view on life," he said. "I know it sounds cliché, but it's not about accumulating stuff and making plans, or reaching a point of success and then slowing down when the timing is right. It's about living for the moment and enjoying what you have."