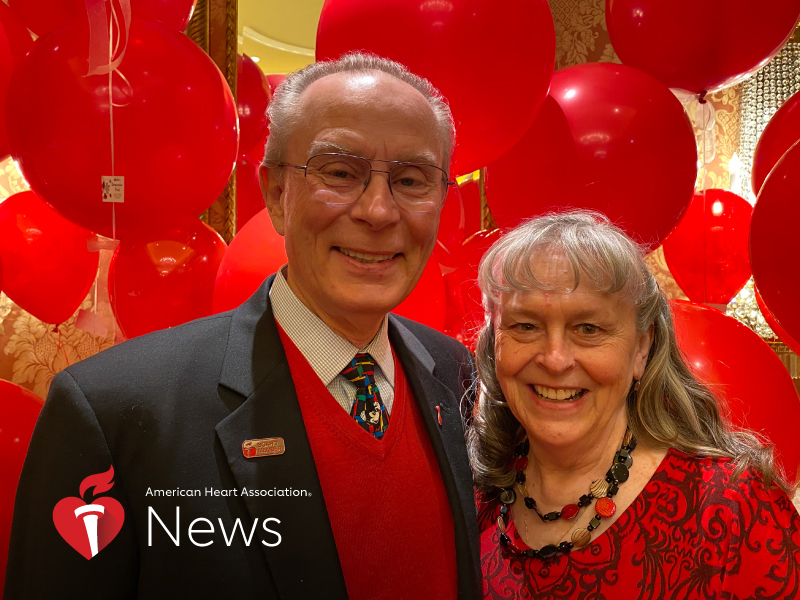 FRIDAY, May 8, 2020 (American Heart Association News) -- Retired happily and resettled in a peaceful community near Salt Lake City, 70-year-old Doug Tapking is enjoying the good life – golfing and woodworking, singing in choirs with his wife, Karen, and spending time with their four grandchildren.

But retirement hasn't always been so idyllic. Four years ago, while dining out with another couple at a bustling steakhouse, Doug's left arm and leg began to cramp. Stretching his leg didn't help.

John, his dining companion, asked Doug to raise his left arm. Unable to do so, Doug used his right arm to lift it.

John jumped out of his seat and called 911. Two restaurant employees helped move Doug from a booth to a chair and held him up so he wouldn't fall to the floor. Within minutes, the paramedics arrived.

"When the paramedics took him out, I didn't know if I'd ever see him again," Karen said.

Doug was taken to Los Robles Hospital & Medical Center in Thousand Oaks, California – not far from his and Karen's former home in Ventura County. It had recently become a certified primary stroke center.

"If it had happened one year prior, I would have been taken to a hospital and then flown to another center," he said.

After taking CT scans and MRIs, doctors gave Doug an clot-busting drug and snaked a catheter up his leg to his brain and removed the blood clot. Then they inserted stents to resolve the cause of his stroke, a tear in a neck artery.

Just a few hours later, Doug was able to speak and move without any trouble.

"I wanted to go back and eat my steak," he said.

Three days later, he was released from the hospital and instructed to go home and sleep.

As he soon discovered, the brain takes time to heal. For the first couple of weeks, he didn't leave the house, waking up for an hour or so at a time before drifting back to sleep.

His depth perception wasn't the same. Sometimes he would reach for something and knock it over. And he had difficulty putting pieces of wood together in his workshop.

Doug also noticed some people treated him differently, excluding him from conversations and looking at him strangely when he took too long to articulate his thoughts.

"It was extremely frustrating," he said. "I'd get angry and depressed."

He also wondered why he survived when others don't.

Eager to aid others going through the same thing, Doug began sharing his story with physicians and survivors, and he volunteered with the American Heart Association and American Stroke Association.

Since his stroke in 2016, he has met with at least 100 people. For instance, in February, while attending the AHA's International Stroke Conference in Los Angeles, he discovered his taxi driver's husband was a stroke survivor.

"I counseled her on what happened to me and what she should expect," Doug said. "I was trying to help her to understand that she needs to take care of herself too."

Karen, however, is less enthusiastic about hearing the story over and over. She never again wants to step foot in the steakhouse where it happened.

Doug understands her feelings, but he continues to help others any way he can.

"Once you get through a stroke, if you are not heavily debilitated, you're just kind of turned loose to go live life, and many people kind of struggle," he said. "It's very fulfilling for me to help others get through this process."