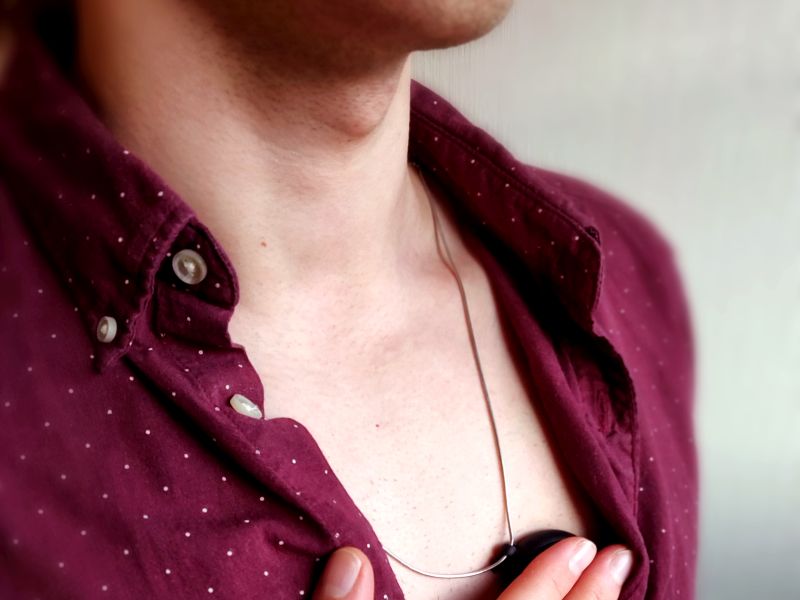 WEDNESDAY, May 6, 2020 (HealthDay News) -- The latest addition to medical haute couture may be a necklace outfitted with a pendant that people can use to screen themselves for signs of an abnormal heart rhythm condition known as atrial fibrillation.

Fashioned by a team of Finnish researchers, the pendant houses a portable electrocardiogram (EKG) designed to transmit heart readings to a cellphone app and ultimately to a cloud-based server. Once there, the information is fed into an artificial intelligence (AI) algorithm.

"The EKG measurement is very easy to do," explained study author Elmeri Santala, a Ph.D. candidate in clinical research in the faculty of health sciences at the University of Eastern Finland. "The user only needs to place the necklace EKG device between the palms of his/her hands or between the chest and the palm, and start the EKG measurement from the [phone] application."

The app then gathers a 30-second EKG reading, Santala explained. That reading is immediately forwarded to the cloud-based AI, which produces nearly instantaneous diagnostic results. Those results can then be sent both to the patient and to a physician for final review.

To date, Santala and his colleagues have tested the EKG necklace on 145 Finnish people. All underwent both a standard EKG reading and a self-administered necklace reading.

Working with cardiologists, the study team concluded that the necklace was able to generate highly accurate EKG recordings.

The team also found that the AI system was highly accurate at interpreting those recordings. It achieved 95% to 98% accuracy in identifying those patients who had experienced an atrial fibrillation-generated abnormal heart rhythm ("test sensitivity") and 100% accurate in identifying those who had not ("test specificity").

And because "atrial fibrillation is the most common arrhythmia, and a fast-growing public health problem worldwide," the hope is that the necklace will boost the ability "for anyone who feels at risk of developing a-fib" to conduct routine self-monitoring, Santala said.

In the United States -- where a-fib affects about 2.7 million Americans -- both the American Heart Association and American Stroke Association say that getting screened during a primary care check-up "can be useful."

But following that advice can prove difficult, said Santala, given that a-fib "is often symptomless and intermittent, making its detection and diagnosing challenging."

Santala acknowledged that patients already have a number of effective invasive and noninvasive a-fib monitoring options. Those include small wearable devices such as the "Holter monitor" -- which attaches to the chest with electrodes -- and invasive heart recording devices (called loop recorders) that must be implanted surgically. There's also EKG apps that run on the Apple iWatch.

However, such options "are expensive and require interpretation by health care professionals," said Santala. By contrast, the necklace "is simple to use and allows repetitive self-monitoring of heart rhythm, thereby improving the likelihood of detecting atrial fibrillation."

Necklace pricing is yet to be determined, said Santala, but it will be "less expensive than an Apple iWatch."

A couple of U.S. experts reacted to the Finnish effort with cautious optimism.

"The general rule is the more you screen for a-fib, the more you'll find," said Dr. Patrick Ellinor, director of the cardiac arrhythmia service at Massachusetts General Hospital in Boston.

"And everyone that sells any kind of device that's on you wants to add an EKG to that device because the best technology is the one that's actually on you and that you'll use," Ellinor said.

"The most famous example is probably the iWatch, which looks good, so people do wear them. But that'll set you back about $500. So if this necklace works well, looks good, and has a price point that's less than that, then I would say it could be a reasonable option," Ellinor added.

But Dr. Gregg Fonarow, director of the Ahmanson-University of California, Los Angeles, Cardiomyopathy Center, said that while the necklace's ability to accurately record EKGs was "found to be of sufficient quality," more research is needed.

"Further large outcome studies are needed to determine if detection and treatment of atrial fibrillation using these types of devices can actually reduce the risk of having a stroke," Fonarow stressed.

Santala and his colleagues reported their findings in an online presentation that posted this week on the European Society of Cardiology's website. Such research should be viewed as preliminary until published in a peer-reviewed journal.