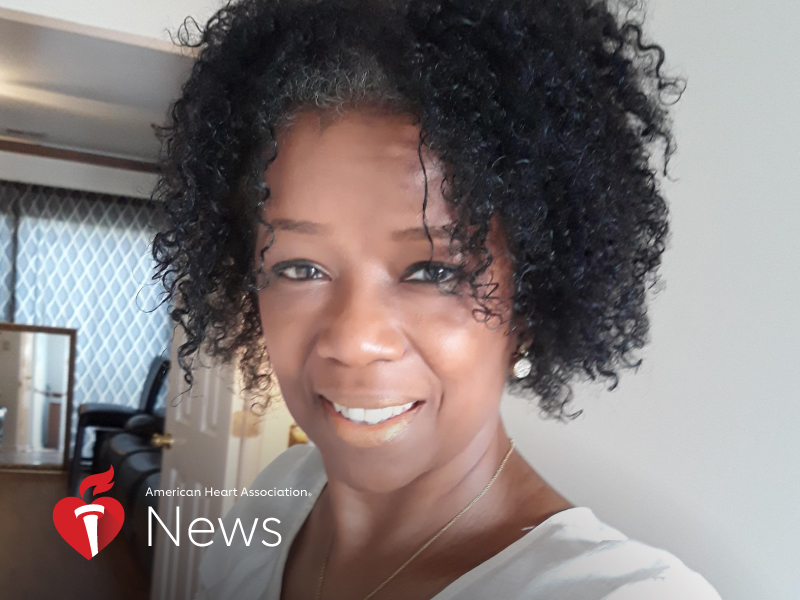 FRIDAY, May 1, 2020 (American Heart Association News) -- As a caretaker for her aging and ailing parents, Deborah Brown took on many responsibilities. At work, she dealt with extreme cases of child abuse and neglect as a lead trauma investigator for the City of Chesapeake Child Protective Services in Virginia.

Even though she knew she was "burning the candle at both ends," Brown gladly took on another duty – speaking at the women's day service at Covenant Fellowship Church.

Shortly after greeting the crowd, Brown began to repeat herself. She stepped back from the podium momentarily, then continued.

"The next thing I knew she was on the floor," said Dorothy Overton, the women's services minister who had invited Brown to be the guest speaker.

Brown had stumbled over the audio speaker next to the pulpit and collapsed face forward. The church pastor and others jumped up to help.

"Immediately, we began to pray," Overton said. "She was moving her lips. Nothing was coming out. Right away, we knew she was in trouble."

Dr. John R. Baker performed an endovascular procedure to repair a ruptured artery in her brain. She had suffered a subarachnoid hemorrhage, a type of stroke that can be life-threatening because of bleeding into the space surrounding the brain. The doctor was able to stop the bleeding around 2 a.m., approximately 14 hours after her collapse.

Brown, then 52, was diagnosed with a second brain aneurysm that day, though it had not ruptured and would be addressed later.

After 11 days in intensive care, Brown recovered in a rehabilitation center for 12 days. Her vision and cognitive abilities were impaired at first. They gradually improved. She returned to work after six months, with some restrictions.

"I wanted to work," she said. "I love advocacy and protecting children."

When a brain aneurysm ruptures, the chance of death is about 40% and the chance of some brain damage is about 66%, even with treatment. Fortunately, Brown had no serious lasting physical effects, except for some heaviness and a bit of numbness in her left leg, which she considers more of a nuisance than anything.

Doctors monitored the other aneurysm for a year. Brown worried it might rupture at any moment. The uncertainty was "horrific," she said.

"I lived my life wondering when it would happen," she said.

By December 2018, another of her doctors, Dr. Joseph L. Koen, felt the time was right to clamp the second aneurysm. While the previous procedure had been minimally invasive (doctors sent a catheter through the groin to ultimately reach the brain), this time the surgery required opening her skull. It was successful, and soon Brown was on the mend.

Looking back, she doesn't recall any warning signs before her medical emergency, though some people with cerebral aneurysms before a rupture may experience headaches, vision problems or other symptoms.

Brown, for the most part, took care of her overall health. She went to yearly doctors' appointments, watched her sodium intake and exercised regularly. She particularly enjoyed walking the pedestrian paths of the Jordan Bridge.

But she believes stress and lack of sleep affected her blood pressure, which she now takes medication for. Taking care of her father, who was an amputee with dementia, and her mother, who had heart failure, took a toll.

"Everything fell on me," she said.

Brown's parents have since died. She recently retired after 18 years in child protective services.

In sharing her story, she urges caregivers to seek life balance and to allow others to help so they can rest and tend to their own needs.

"Self-care is critical, it is important, it is life-changing," she said.

Brown emphasizes the need to be physically active and to "know your numbers," such as blood pressure, blood glucose and cholesterol levels.

Among Brown's new adventures is her application to volunteer to comfort substance-exposed newborn babies at a local hospital. She also has attended a class on healthy cooking and eating. She still enjoys walking the Jordan Bridge.

"To say I am blessed is an understatement," she said. "We have to take care of this body."