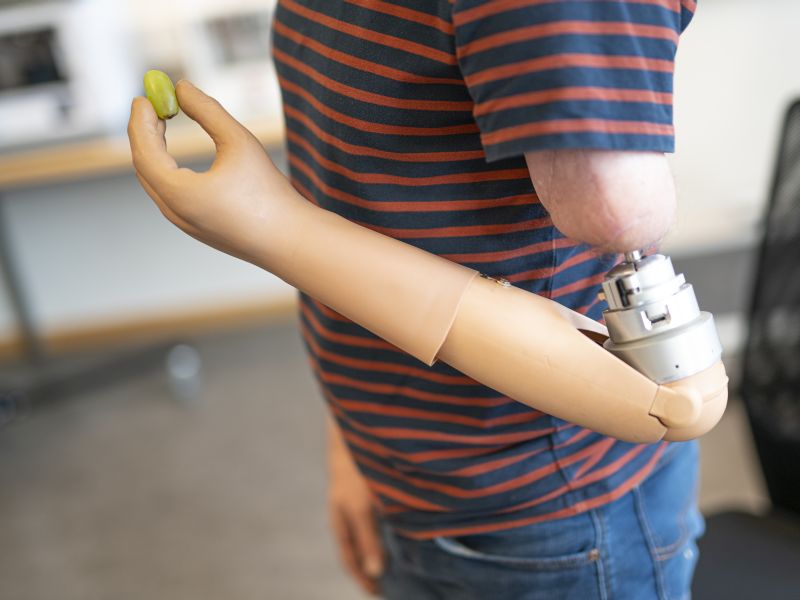 The success story involves just three patients in Sweden. But all have lived with the artificial limb for three to seven years -- using it for everything from work to skiing, canoeing and ice fishing.

Unlike conventional arm prostheses, which can be uncomfortable and difficult to maneuver, the new one has direct connections into the bone, muscle and nerves in the remaining portion of the natural arm.

That means it can operate much more precisely, according to lead researcher Max Ortiz-Catalan, an associate professor at Chalmers University of Technology in Gothenburg, Sweden.

He said the most novel advance, though, is that the prosthesis allows people to "feel" what the hand is touching.

The three patients -- all men in their 40s -- say they have greater trust in the limb and that it feels like "part of themselves."

U.S. experts praised the work, which is being reported in the April 30 issue of the New England Journal of Medicine.

Many advances have been made in artificial limb technology in recent years, said Paul Marasco, head of the Laboratory for Bionic Integration at the Cleveland Clinic. But, he said, it all has to be integrated into a prosthesis that people can readily use in everyday life.

"The great thing about this study," Marasco said, "is they used established technology and newer technology that's been studied, and fused it all."

For one, arm prostheses have traditionally been attached to the remaining limb with a "socket" and often a supporting system like a shoulder harness. But that can cause pinching and irritation, and the artificial limb is typically cumbersome to maneuver.

The following video is narrated in both Swedish and English, but it offers a vivid look at the various ways the prosthetic arm works:

The new prosthesis is attached using a more recently developed technique called osseointegration -- where the artificial limb is surgically anchored onto the remaining arm bone.

From there, electrodes are implanted into the arm's muscles and nerves. They serve to relay signals, in both directions, between the brain and the prosthesis. Those signals are interpreted by a small control system embedded into the prosthesis, using sophisticated artificial intelligence algorithms developed by the Swedish team.

The result is that people can control movement of the limb with their minds. At the other end, "force sensors" in the prosthetic thumb send information to the brain, which allows it to perceive pressure levels against the hand.

"They think about opening the hand and their prosthetic hand opens," Ortiz-Catalan said. "And when they touch an object, they feel sensations of touch."

There are already sophisticated, "myoelectric" arm prostheses out there. They are powered with the help of electrodes placed on the skin of the remaining natural arm; signals from the muscles are sent to electric motors that operate the prosthesis.

"But this study takes it to another level," said Dr. S. Robert Rozbruch, chief of the limb lengthening and complex reconstruction service at the Hospital for Special Surgery in New York City.

Rozbruch is one of only a small number of U.S. surgeons who already use osseointegration for attaching artificial limbs, including myoelectric arm prostheses.

The advantage with the new prosthesis, he said, is that the electrical signals from the implanted system appear "much stronger, and you get more out of them.

"That's remarkable stuff," Rozbruch said, "to be able to get both motor [movement] and sensory information."

Of the three patients, two had been suffering phantom limb pain with their old prostheses. That's a common phenomenon among amputees, where painful sensations are perceived as coming from the portion of the limb that is no longer there.

After receiving the new prosthesis, both patients saw their pain go away. Ortiz-Catalan said that's because the prosthesis uses the same nerve networks that "lost their job" due to the amputation. Now that they've been "put back to work," they are no longer processing pain.

For now, the technology is only available in Sweden. The hope is that it will be more widely available within a couple years, Ortiz-Catalan said. The researchers are also working on a similar leg prosthesis, which they plan to implant in their first patient later this year.

Rozbruch said these initial patients show that the approach is feasible. But, he noted, wider use will also depend on practical matters -- including cost.

As for durability, Ortiz-Catalan said the implanted system is expected to last a lifetime.