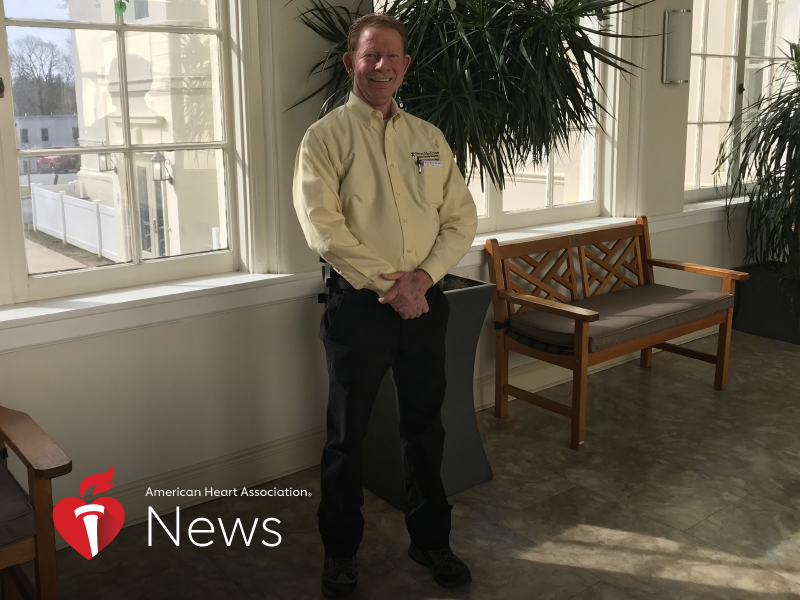 FRIDAY, April 24, 2020 (American Heart Association News) -- Helping other people is a way of life for Chris Hagan. He volunteered as a fireman for more than three decades and still does community outreach for the station.

But 22 years ago, Hagan was the one who needed help, as he worried about how to pay bills while waiting for a heart transplant.

"It was horrible sitting at home feeling helpless," he said. "But my family and friends were there for me."

The symptoms seemed to come out of nowhere.

Hagan was working on a home carpentry project when he began to have trouble catching his breath. He drove himself to the firehouse to test his oxygen level.

Figuring the abnormally low result was a mistake, Hagan changed the batteries and tested again. The reading was the same.

He went to the emergency room, where an X-ray revealed his heart muscle was enlarged as a result of cardiomyopathy.

"I figured they would just tell me to quit smoking, but that wasn't the case," he said. "I needed a heart transplant."

Hagan went by ambulance to the University of Pennsylvania, where doctors conducted a number of tests. Eight days later, he went home and waited for a new heart.

He never smoked another cigarette.

Life had changed. Struggling to breath and with intense fatigue and nausea, the then-33-year-old father of two young children couldn't work for nearly a year.

Knowing Hagan faced huge medical bills, the community stepped up. His fellow firefighters, friends and family dropped off lunches and dinners, mowed his lawn and drove him to his medical appointments.

And when a family friend told Philadelphia Phillies players Curt Schilling and Wayne Gomes about Hagan's condition, they offered to help. The players signed baseballs and other memorabilia for more than 1,500 fans at an all-day event that raised about $90,000.

"I used that to pay the bills, medicine, copays and all that kind of stuff," Hagan said. "It was awesome."

About seven months later, Hagan was listening to the fire department scanner at home when he heard about a motorcycle accident just around the corner from his house.

Later, his wife told him the victim was her co-worker's son. When he was declared brain dead, the young man's mother asked doctors to give Hagan his heart. This is known as a directed donation. The heart still had to clear medical hurdles to ensure it matched. It did.

After receiving the call he'd been waiting for, Hagan checked into the hospital and received a new heart early the next morning.

"I could feel that heart pumping," he said. "I was so relieved that I had woken up."

Just a few hours later, the hospital staff got Hagan out of bed and into a chair. The next day, with the help of physical therapists, he walked down the hallway. Less than a week later, his donor's mother and sister visited him.

"I walked down to the guest waiting room and gave them a hug," Hagan said. "We were all crying."

Three months later, after six weeks of cardiac rehabilitation, Hagan returned to his day job and to his role as a volunteer firefighter. Later, he accepted a job at Chester County Hospital, where he is director of plant operations.

It hasn't been an easy road. Three years ago, Hagan was diagnosed with non-Hodgkin lymphoma and underwent eight rounds of chemotherapy followed by 30 days of radiation. Last year, he experienced intense chest pains. His new heart suffered a heart attack.

"People who have had a heart transplant have more complications," said Dr. Mian Jan, an interventional cardiologist and chairman of the department of medicine at Penn Medicine's Chester County Hospital.

Jan said the nerves in transplanted hearts have been cut off, sometimes resulting in different symptoms than those in a typical heart attack patient.

"Most people start having chest pain months before they have a heart attack, but he only had symptoms when one of his arteries was 100% blocked," Jan said.

Jan opened the artery with a balloon and inserted a stent, opening the blockage. Afterward, he prescribed a medication to lower Hagan's high cholesterol.

"His heart function is normal, so that's a very positive development," Jan said.

After another stint in cardiac rehab, Hagan recommitted to a healthier diet, cooking at home instead of eating fast food and replacing old favorites like steak and pizza with chicken.

"You really have to take care of yourself if you want to stick around," he said.

The nurses at his job know his story and often pull him in to talk with other people with cardiovascular disease. He has spent hours sitting with patients over the years.

"It's rewarding," he said. "When you need support, it's important to take it."