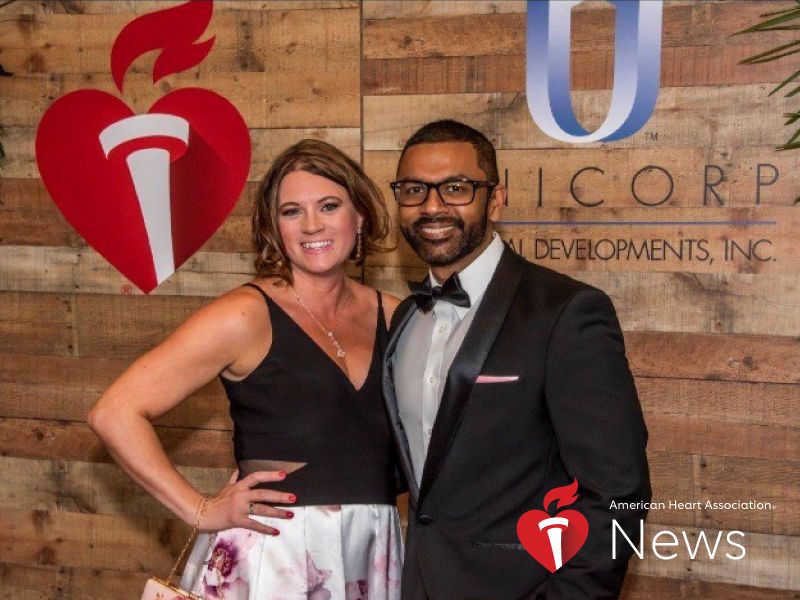 Steve Seeram was confused. Regaining consciousness, he recalled being diagnosed with a blocked artery and being prepared to undergo a routine non-invasive procedure to implant three stents. Doctors had said he'd be home the next day.

"What are you talking about?" Steve asked. He looked down and saw a large bandage on his chest.

"You had open-heart surgery," Dr. Clay Burnett told him. "You died on my table twice. I literally had your heart in my hand."

Then Steve, still confused, noticed the doctor's surgical cap. It was covered with Batman emblems.

"Why are you wearing a Batman hat?" Steve asked.

Burnett said "Batman" had been his nickname playing college football.

But Steve later saw another reason. Burnett was his superhero.

Nearly a week earlier, on Aug. 6, 2016, Steve, then 44, woke up in the middle of the night gasping for air. He was unnerved, but fell back to sleep until the alarm went off. It was time to hit the gym before work.

His younger brother had died of colon cancer at 32 a decade earlier. Since then, Steve, whose family history also includes diabetes and heart disease, had devoted himself to a healthy lifestyle. He'd lost more than 20 pounds, gained muscle and maintained a nutritious diet.

On the treadmill at the gym, Steve felt short of breath and cut his workout short. While driving to his office in Orlando, Florida, he called his wife, Christina, but brushed aside her suggestion to go to the doctor.

She got a second call from him later that morning, this time from the back of an ambulance, asking her to meet him at the hospital.

Doctors discovered his right coronary artery was fully blocked. He needed a stent implanted via cardiac catheterization, a procedure their hospital wasn't equipped to perform. So paramedics took him to a hospital that could.

Christina was concerned but not alarmed. She picked up their daughter, Abigail, who was then 4, and drove to the hospital. A friend insisted on joining her for the wait.

"They told me it would take two to three hours, and when it crossed over into five hours, I got nervous," Christina said. "Four doctors came and said to follow them. I remember running through the long halls of this huge hospital for what felt like forever. We reached an area that said Cardiac ICU Unit and I thought, 'This can't be good.'"

Doctors told Christina complications had arisen. One of the stents ruptured. Repairing it required open-heart surgery.

While Steve was in recovery, another rupture caused accumulation of fluid in the pericardial space, putting pressure on his heart. Called a cardiac tamponade, the syndrome prevents the heart from properly filling with blood.

"We've run into serious complications and need to do another surgery," Burnett told her. "This has a very low survival rate, about 2%."

He told Christina she could see Steve very briefly.

"It was my chance to say goodbye," she said.

After the surgery, Steve was put into an induced coma for five days. He'd also been under anesthesia for about 24 hours. Doctors had no idea what effect the surgery and anesthesia would have on Steve's physical or cognitive functions.

After regaining consciousness and learning his surgery proved to be far from routine, Steve spent about three weeks in the hospital. It took him nearly a week to recognize his immediate family members and to fully grasp what had happened. He battled some memory loss, tremors and difficulty walking, all of which dissipated.

"My mind was telling me yes, but my body was saying no," Steve said. "I went from being such a physical person and then this life-altering change happened. I went through a depression mode, but every day I did a little more with the physical therapist and I thought, 'Yeah, I can do this.'"

At first, he couldn't walk as far as next door. Eventually he made it to the stop sign at the end of his block.

"I literally cried when I touched that stop sign," he said.

Steve returned to work four months after the surgery. He will always have some residual effects, especially with balance and perception, and tremors. But medication and movement modification have helped.

The impact of the emergency on his family – Christina, Abigail and Steve's 21-year-old son, Mitch – didn't really hit Steve until the family reenacted some of the events around his surgery for a video shown at the American Heart Association's Orlando Heart Ball in 2019.

"To be able to see how it all happened and what my family went through was just chilling," he said.

Although Steve is back at the gym and generally enjoying life, Christina stays on high alert.

"I think about it more than he does," she said. "I worry about his weak immune system, about him falling, about him living with a compromised right artery. It's very stressful."

Steve said he focuses on the miracle of making it through the surgery and not giving up during recovery.