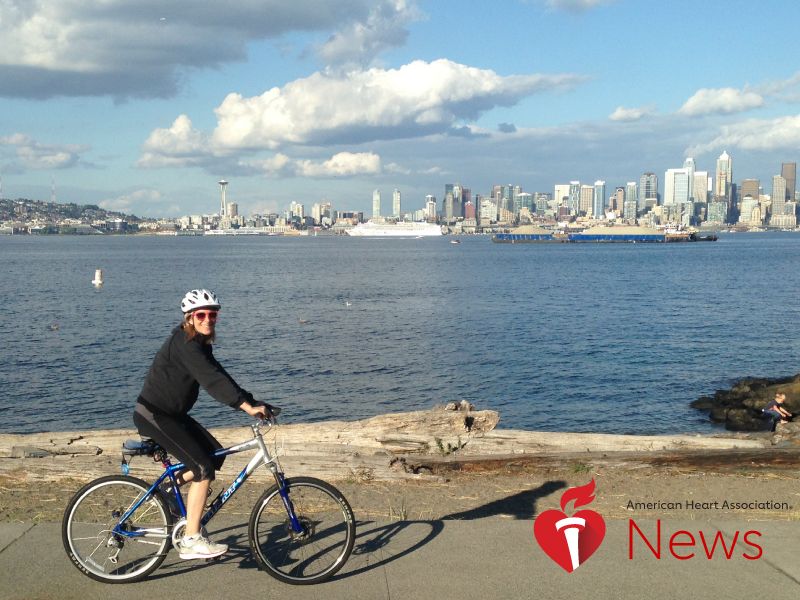 TUESDAY, March 24, 2020 (American Heart Association News) -- As the birthplace of Nirvana and Pearl Jam, the Seattle area became the epicenter of the grunge music scene throughout the 1990s. Laura Vanderpool was right in the thick of things, playing guitar and singing with several bands.

"There's a creative buzz playing in a band that's euphoric," she said. "You get locked into each other in a really spiritual way, and there's nothing else like it."

Certainly not public relations and marketing, which was how she paid the bills. Vanderpool often took her work home with her. When she wasn't strategizing about an existing client, she was networking to recruit new ones. "That was taking a toll," she said.

Walking, hiking, running and biking helped her unwind. She enjoyed jogging a 3-mile loop around a lake. During the summers, she often rode her bike to work, a 45-minute trip. In 2010, she and a friend embarked on a ride to raise funds for the American Diabetes Association. About 10 miles in, Vanderpool slowed and fell to the ground unconscious.

Merlino had recently completed 12 weeks of EMT training and was about to start a new career as a firefighter. He took Vanderpool's pulse and performed CPR, alternating between chest compressions and mouth-to-mouth. A police officer arrived with a bag valve mask, and Merlino instructed a passerby how to use it.

"Doing that validated my decision to change careers pretty late in life," he said. "I realized this is definitely what I need to be doing."

Within minutes, the fire department and paramedics arrived. They resuscitated Vanderpool using a defibrillator. To help prevent brain damage, they placed her in a cold suit that lowered her body temperature, putting her into a hypothermic coma.

At the hospital, Vanderpool's family feared the worst. Her mother brought in a parish priest to administer last rites. Her daughter, Lindsay, then in middle school, refused to touch her.

"I heard later she had said something like, 'That cold thing in a wetsuit is not my mom,'" Vanderpool said.

The doctors soon learned what caused the collapse. The then-51-year-old had a 98% blockage in her left anterior descending artery. It's the kind of heart attack that can be quick and deadly.

Doctors inserted a stent to open the blockage. Vanderpool soon woke up, completely unaware of how close to death she had been.

Vanderpool realized she had been ignoring warning signs. About a month before, she became lightheaded after a morning run and fainted at work. A co-worker called an ambulance, but the doctor told her she was probably just dehydrated. From that point on, she felt sluggish while exercising.

Later, the ADA connected Vanderpool and Merlino. They met at a Mariners baseball game. Over time, they became friends, and their families have gathered for meals.

A few weeks after her cardiac event, Vanderpool returned to work. At first, life seemed to return to normal. But exactly one year later, she was hit with a wave of depression. After talking with a therapist, she decided to pursue a less stressful career.

"I realized that I could have a new chapter," she said.

She quit her job and accepted a technical writing position. While it challenges her mentally, almost like a puzzle, she leaves her work at the office. That clears plenty of time for family, working on a screenplay, and writing and playing original music. She's in two bands, often performing in bars and at music festivals and making records.

"I savor every moment," she said. "The shift in perception and attitude has benefits way beyond what you can imagine."