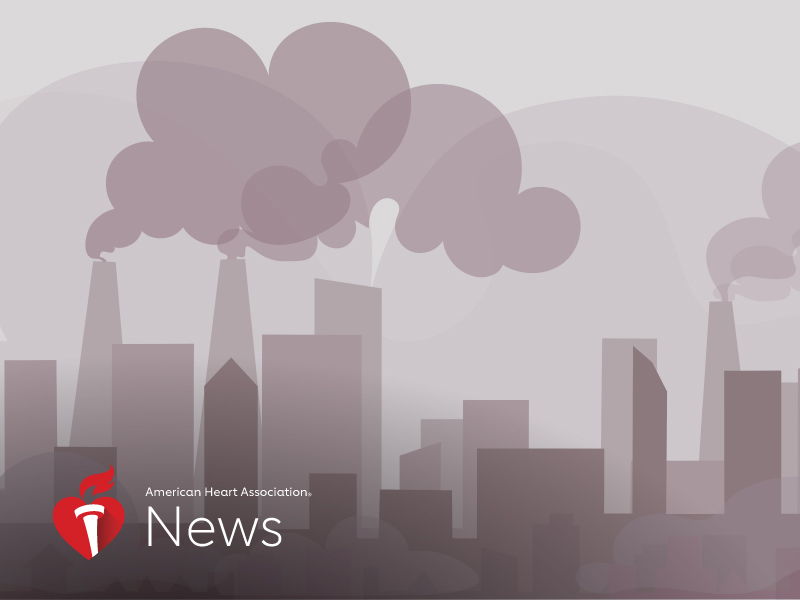 MONDAY, March 16, 2020 (American Heart Association News) -- Study after study has concluded that air pollution could be bad for heart health. For people already living with heart failure, new research shows it may shorten their lives significantly.

Those with heart failure who were exposed to air pollution levels that exceeded federal Environmental Protection Agency standards saw more than three-quarters of a year of life lost, according to a study published Monday. That is substantial, researchers say, given that people with heart failure have a median life expectancy of less than five years.

"The most surprising thing for me was how strong the association we observed was," said Cavin Ward-Caviness, lead author and principal investigator for the EPA. "It was much stronger than what would have been observed in the general population."

The study, published in the Journal of the American Heart Association, examined the health records of 23,302 patients diagnosed with heart failure between July 2004 and December 2016. They were followed from one year after diagnosis until death or the end of the study period.

Researchers for years have studied the effects of inhaling harmful particles and gases on healthy populations. In 2004, the American Heart Association issued a scientific statement concluding exposure to air pollution contributes to cardiovascular illness and death. A 2010 update elaborated on those risks, which include heart attack, stroke, arrhythmia and heart failure.

A 2018 study in the AHA journal Circulation found healthy people exposed to even low levels of air pollution over a handful of years developed enlarged heart chambers, a common precursor to heart failure.

But until now, researchers have not studied the effects on people already living with a heart failure diagnosis.

More than 6 million adults in the United States live with heart failure, a number expected to reach almost 8 million by 2030 as the population ages. Researchers predict 1 in 5 people in the U.S. will develop heart failure over their lifetime.

"This is a population that has been understudied," Ward-Caviness said. "This information can be helpful as we provide information to healthcare practitioners in order to help their patients make decisions about lowering their risks."

"This study reconfirms the fact that amongst susceptible adults even levels of air pollution that meet air quality guidelines still pose significant health risks," said Dr. Robert D. Brook, a professor of cardiovascular medicine at the University of Michigan in Ann Arbor, who was not involved in the study. "Therefore, we need to continue to strive to meet those standards and in fact reexamine the potential benefits for striving to further improve air quality to optimally protect public health."

The EPA outlines risks associated with air pollution on its website – especially fine particulate matter, a mixture of small particles and droplets in smoke and haze that can be harmful when inhaled. In addition to risk of stroke and heart attack, these particles could cause cardiac arrest among people who have internal cardiac defibrillators. The heart's electrical function could be disrupted by the particulate matter, leading to abnormal rhythms.

Brook, who was chair of both AHA scientific statements on air pollution, said there are some measures at-risk people can consider taking to limit their exposure, like the use of an indoor air filter, reducing time spent in traffic, following activity recommendations based on the daily air quality index, and reducing fireplace and wood stove use. While these are practical approaches, Brook said, they also need further study to test their health benefits.

The study also sheds light on levels of vulnerability to air pollution based on subtypes of heart failure. For example, those with preserved ejection fraction – when the heart pumps normally but its lower chambers, the ventricles, do not relax as they should – had higher mortality, Ward-Caviness said.

"This points to the need to clinically (categorize) individuals and understand their personalized risk to the environment," he said.

Some individual- focused behavioral information like smoking is often limited in electronic health records, and thus was not included in the study. Future studies will need to include these data. Patients also could have been seen at other hospitals, so the dates of diagnosis may not be certain. Additionally, this particular cohort was not geographically diverse – participants were mostly from urban areas of North Carolina.

These findings, Ward-Caviness said, represent the beginning of what researchers hope will be an expanding body of knowledge. Their next step is to study 30-day hospitalizations, which contribute to national health care costs. He said they would also like to study other patient populations.

"Heart failure patients are some of the sickest cardiac patients you'll encounter, but we understand very little about their environmental health risk," Ward-Caviness said. "It is important to continue studying this population to learn how to better educate patients and the health care professionals who care for them."